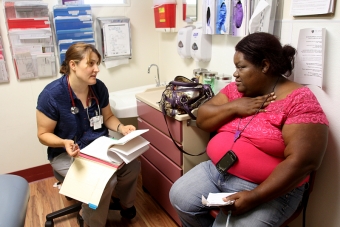 Family Nurse Practitioner Maia Dehlinger talks with Tanisha Banks about treatment for her diabetes and other health concerns at the Ravenswood Family Health Center in East Palo Alto on Aug. 31, 2012. Photo by Veronica Weber/Palo Alto Online.

East Palo Alto's poorest residents and the city's population in general live with far greater health problems than San Mateo County's as a whole, according to a county study and a recent assessment by the Ravenswood Family Health Center in East Palo Alto.

Residents in East Palo Alto, East Menlo Park and North Fair Oaks -- areas served by Ravenswood Family Health -- have nearly twice the rates of hypertension (42.8 percent) than other California residents, according to Ravenswood. The comparison was based on the 2009 California Health Interview Survey, the nation's largest state health survey.

People also die younger. The average lifespan of an East Palo Alto resident is 61.9 years (the figure doesn't include deaths due to crime or accidents), more than 13 years less than that of county residents, according to a 2010 comparative health profile by Get Healthy San Mateo County, a San Mateo County Health System initiative.

The city's unemployment rate, at 16.8 percent, is more than double the county average.

Buada said economic disparity strikes residents at the most fundamental level -- nourishment -- and that has led to disproportionately high levels of chronic diseases such as hypertension, diabetes and obesity.

A staggering 67.1 percent of residents living in Ravenswood's service area are obese or overweight. Buada blames the lack of access to quality foods but also a lack of education and the persistence of some unhealthy cultural values.

"Food is not affordable. Until recently, East Palo Alto was a food desert," she said.

The opening of Mi Pueblo supermarket in November 2009 -- the city's first grocery store in more than 30 years -- has improved access to fresh fruits and vegetables, but Buada said the balance of food people are eating is still processed carbohydrates.

For some residents, sweet drinks and candy offered to children are culturally valued. They confer that a person is well off enough to afford sweets, she said.

Residents can't afford to go to the gym or to buy bicycles or helmets, she said. Choices such as walking or running are difficult for many families when parents work two or three jobs to make ends meet. Television becomes the babysitter, and no one gets out to exercise, she said.

Then, there is crime.

A map published with the article shows 5,200 shooting incidents between January 2009 and October 2011, dozens of which occurred around neighborhood schools and public facilities.

"East Palo Alto is approximately 2.5 square miles, and this map suggests that there are few places within the city's borders where shootings do not occur," wrote the authors, who also included Brad Jacobson of the San Mateo County Health System.

"Research consistently shows that low-income people with less than a high school education and people of color have higher rates of illness and live shorter lives," a 2010 study, Get Healthy San Mateo County, noted.

Relatively fewer East Palo Alto residents have health insurance, and overcrowding in homes and outright homelessness have contributed to the health gulf.

The problems extend to the city's children. East Palo Alto is a city of 28,155 residents. Those under the age of 19 years make up a greater percentage of the population than the county average -- 35.1 percent compared to 24.3 percent.

Yet East Palo Alto and East Menlo Park kids are hospitalized for asthma at almost double the county rate, according to Ravenswood.

But while the rates for childhood asthma, diabetes and cardiovascular diseases are high, programs being initiated by Ravenswood, the San Mateo County Health System and the East Palo Alto Police Department are working to close the gap.

More early-intervention programs, close tracking of patients, and health, food and exercise programs are offering services that residents in other communities might often take for granted.

The police are working to create fitness-improvement training (FIT) zones in two of the city's most crime-ridden neighborhoods, with officers joining residents in outdoor activities on the streets and in parks. Roads would be temporarily closed to increase safety during walking, jogging and bike-riding events, according to Davis' report. Ravenswood staff would also come into the fitness zones to increase talk with people about health and local medical services.

Police are also making home visits to parolees and gang members through Operation Ceasefire, asking them to abandon crime in exchange for services such as job counseling, medical and dental care and drug and mental health counseling. Davis has said that medical care was cited as one of the greatest needs among persons police have contacted.

In June, Ravenswood received a $7.3 million grant from the Center for Medicare and Medicaid Service to improve preventive care for chronic-disease patients. Programs include self-management classes and patient skill-building to manage mental health issues such as depression and anxiety.

Two months ago the center hired a pharmacist through a Kaiser Permanente grant to help patients with complex medical regimens manage medication. Due to the inability to read and understand instructions, patients are not following medication directions, harming rather than improving their health.

The services are having positive results since 2008, according to Ravenswood. Diabetic patients who manage their blood-glucose levels to targeted levels have risen to 66.6 percent. One-third more women receive timely Pap tests, and pregnant women who began prenatal care in the first trimester soared from 47 percent to 77.6 percent. The number of babies born weighing less than 5 pounds 8 ounces has dropped by half from 4.16 percent.

Many people get a good amount of exercise just by walking around town. Unfortunately, walking is difficult in East Palo Alto and east Menlo Park because of the terrible roads. Roads are very dangerous for pedestrians because of all the car traffic coming of the Dumbarton Bridge and spilling into residential streets. Further, the roads and sidewalks are in terrible condition with cracks and potholes everywhere and even long sections of street without any sidewalks. Even without the traffic, walking is dangerous. Why are the streets in east Menlo Park so poorly maintained compared to west Menlo Park?

I agree with the above poster. There are streets/neighborhoods where it is impossible to walk. Especially if you are trying to walking with a baby stroller, or young children. The sidewalks are terrible, and crossing University on Bay, Bell and several other roads is dangerous due to traffic traveling at high rates of speed, running red lights, and rolling through the street while making right hand turns.

The first few seconds after awakening; before I remember the virus
By Chandrama Anderson | 0 comments | 2,702 views

Can you stay healthy without making more trash?
By Sherry Listgarten | 2 comments | 1,976 views

Think about helping others in our coronavirus-affected area
By Diana Diamond | 4 comments | 1,887 views