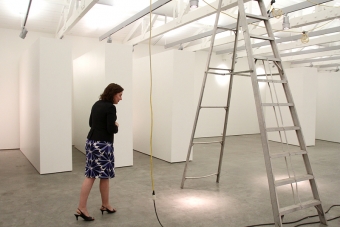 The made-over main gallery at the Palo Alto Art Center is packed to the rafters -- with light. For decades, curators and visitors sighed at the low ceiling. Art doesn't like feeling cramped.

Now, the ceiling has been raised up to the building's rafters, which are newly painted white to better accentuate exhibitions. Even with ladders still perched in the gallery and wires coiled on the floor, the transformation is dramatic. The old space now feels fresh and airy, with only a wisp of new-paint perfume.

Looking up, center director Karen Kienzle says happily, "We lived with the low ceilings for more than 40 years."

While Kienzle has been director only since 2009 -- and certainly doesn't look old enough to have been around when the facility was built in 1953 -- she has been coming to the art center ever since she was a school kid in its Project LOOK! program. She seems to feel a personal pride in the major renovations now being completed.

With the center's reopening date set for Oct. 6 and nearly everything reportedly running on schedule and in tune with the $7.9 million project budget, Kienzle had a lot of changes to point out on a building tour this week. Galleries and other spaces glow with new paint and lighting, and even the art center's front entrance looks brighter with paler new fiberglass above and the absence of two giant, sun-blocking ferns below.

Before the building closed for construction in April 2011, visitors were met with a wall a few steps inside the front door. Now the wall has been removed and a gallery shop will be built, enclosed all in glass. New glass doors also lead the way to the main gallery.

Another major component of the project by San Francisco architectural firm Mark Cavagnero Associates is the new children's wing. An area where some art courses were held is now a dedicated kids' space behind another set of glass doors. The clay classroom will house the center's summer camp and classes, including a clay class that was at the Palo Alto Junior Museum and Zoo. The Project LOOK! room is dedicated to the 32-year-old program that brings school groups to the center for exhibit tours and art activities.

Kids will also be able to have class outside, on a new deck built from recycled plastic. The deck will partly cover an old grassy area that was bumpy and not the most inviting, thanks to magnolia roots, Kienzle says. (The two dead magnolia trees have been removed and replaced with gingkos.)

Unusual and often recycled materials proliferate throughout the project, which meets LEED Silver certification for green design. In the children's wing and at the front desk, sleek counters gleam in a rich, dark material. "Paperstone," Kienzle says. "It feels like stone, but it's actually made of compressed paper." In addition, there are floors made of recycled cork and rubber, and linseed-oil-based tackboard for displaying artwork. Kienzle says the board is more resilient and "self-healing" than corkboard.

Much of the building's exterior will look the same, except for the children's wing, which is getting a new dedicated entrance on Newell Road, along with a street turn-around and short-term parking for parents. Years ago, that area housed a drive-up window for residents to pay their utility bills.

Double-pane windows are being installed throughout the building for better acoustics and more efficient heating and cooling. The auditorium, which has hosted many a classical-music concert, now has acoustic fabric on the ceiling in the palest lavender, along with upgraded light fixtures that retain the dangly 1950s style. The parquet floor has also been sanded down and looks lighter. The whole room already feels "less echo-y," center publicist Scott Horton notes, praising its acoustics.

Musicians will have to wait a little longer to return to the center, though. Palo Alto's main library will be housed in the auditorium starting in January for a year to a year-and-a-half when the library gets its own facelift.

Other changes at the center will include: ADA upgrades and climate-control improvements, new landscaping in the central courtyard and sculpture garden, new lockers for artists, staff and volunteers; two new kilns; and no more mildewy smell in the auditorium's green room.

This is the first major renovation for the building, which was built as Palo Alto's City Hall. The upgrade is financed by a public/private partnership between the city and the Palo Alto Art Center Foundation, a nonprofit.

The building was designed by Palo Alto architect Leslie Nichols. When it opened in 1953, newspapers described the grouted-brick building with shake roofs as "Ranchero style" and "country club," according to an art-center flier. Later, City Hall moved downtown, and the building was turned into a cultural center in 1971.

With the re-opening approaching, Kienzle and her team -- volunteers and 25 full-time and part-time staffers -- are looking ahead to new exhibitions and projects. Opening day will include art demos, family activities, a ribbon-cutting ceremony, refreshments and music and dance from 11 a.m. to 5 p.m. on Saturday, Oct. 6. Admission is free.

Meanwhile, a new multi-faceted exhibition called "Community Creates!" will be on display in the galleries throughout the center. It features the work of 10 artists who have partnered with local residents to create art installations. They include "The Palo Alto Forest," in which Palo Alto photographer Angela Buenning Filo asked for submissions from the public of their photos of favorite city trees. Some 400 were sent in, and many are being printed on glass for display, Kienzle said.

The exhibition will also include: a sculptural installation of fabric "ferns" by Paz de la Calzada, with help from visitors; a surround-sound installation by Mel Day and Jeanne C. Finley and the local Threshold Choir; ceramic tiles by Carlos Ramirez and visitors, inspired by Mesoamerican architecture; portraits of Bay Area veterans by Lava Thomas; and paper models by Weston Teruya of objects that local residents find important to them.

In addition, the public can also view the 204 entries in the center's recent competition to create its new logo. Colleen Sullivan, who is based at the city's Cubberley Studios, was chosen the winner by a jury.

The art center's classes and other activities that were displaced by the construction are expected to resume at the center right after the opening.

Info: The Palo Alto Art Center is at 1313 Newell Road. For more information, go to cityofpaloalto.org/artcenter.

The new beautifully upgraded Palo Alto Art Center Building is a fantastic addition to our community and the entire area. Thank you City of Palo Alto in partnership with the Art Center Foundation and so many generous supporters for making this building an extraordinary center.

I'm sure the completed work will be fabulous. I only question whether or not a multi-million project like this was wise or justifiable considering the ongoing budget deficit and inability to fund essential needs in infrastructure and public safety. I realize that the foundation contributed to this project in the form of private donations, but I'm quite sure a considerable figure in public dollars had to be utilized.

Projects like these which are desirable, but certainly not essential is a big reason why the city cannot balance it's budget and fund our critical civic needs. We cannot continue to spend frivolously and expect the solution to be yet another bond measure and tax increase. Our city leaders and elected officials must be held accountable to responsible and wise spending.

This thing looks straight out of 1992. Was this really the best design we could get?

Singapore's oldest cafe was about to open in Palo Alto. Then, the coronavirus hit.
By Elena Kadvany | 2 comments | 4,865 views

A Pragmatic Approach to A Trillion Trees
By Sherry Listgarten | 4 comments | 4,139 views

Repairing a Disagreement with your Beloved & “Physical” vs. “Social” Distancing
By Chandrama Anderson | 2 comments | 2,825 views

The University of California’s flexible policies during COVID-19
By John Raftrey and Lori McCormick | 6 comments | 2,712 views