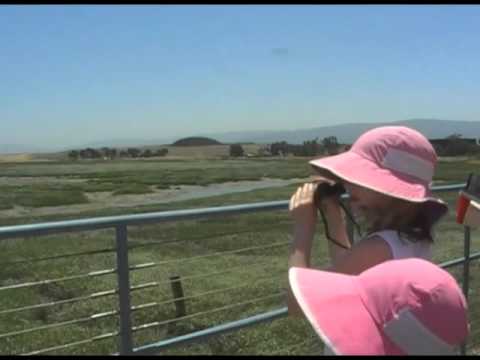 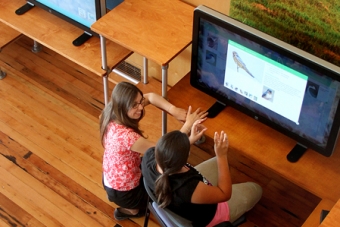 Kristi Moos of the Environmental Volunteers, left, talks with Ariana Gaxiola, 11, about wildlife in the Baylands while Matthew Jones, an intern with the nonprofit, tests out tutorials on the digital touch-screen science displays at the new EcoCenter. Photo by Veronica Weber/Palo Alto Online.

At the ship-shaped EcoCenter in the Palo Alto Baylands, portholes serve as windows on the marshland home of the California clapper rail and the sand piper. Above the windows, the poet e.e. Cummings' words dance: "The world is mud-luscious and puddle wonderful."

It's a sentiment the Environmental Volunteers, a nonprofit organization that teaches science through hands-on education, hopes to instill in children and adults in the Bay Area.

On Sunday, July 22, the 40-year-old nonprofit opened its new headquarters in the former Sea Scout building following an eight-year, $3.8 million effort to restore it.

The EcoCenter boasts wooden decks that provide an all-encompassing view of the surrounding marshlands. Inside, four huge, touch-screen monitors in the capacious Fenwick Hall, the center's main group-learning space, feature colorful, interactive displays on topics such as "Sky," "Earth," "Sea" and "Change." On one screen, there's a quiz on bird-beak identification. Another features live streaming of the tides outside.

The new headquarters will help the Environmental Volunteers reach a wider audience, according to spokesperson Kristi Moos.

"We're able to expand our mission to serve as environmental educators in the local community, and we're excited to call upon the wonderful natural resources available to us," she said. "We will use this wonderful teaching tool to bring the public into a greater appreciation and respect for wetlands and the species that inhabit them."

The center's first exhibit will focus on the marsh and feature a "marsh-cam," a camera that streams video of the marsh and its inhabitants 24 hours a day. A variety of other habitats, ranging from the tundra to the forest, will also be the subject of the center's activities.

Each year, the Environmental Volunteers serves about 13,000 children and adults in Santa Clara and San Mateo counties. Ten thousand of those are taught through schools. The organization trains volunteers to teach natural science through interactive classroom presentations, day camps, nature walks and field trips.

"Our programs are hands-on because kids don't learn in a museum setting. They need to have a personal experience with nature," Executive Director Allen Berkowitz said. "We teach in small groups and keep it inquiry-based so kids arrive at the answers to their questions. We want them to develop an intellectual methodology that will allow them to better understand the world in general."

Teaching children to be comfortable with science is essential, he said.

"Especially in California and the Silicon Valley, science is such a key economic factor. ... Science is an integral part of understanding life and it leads to discoveries as well as better quality of life."

The organization plans a variety of educational activities through the center, including speaking events, art exhibitions and guided hikes focusing on different subjects.

"We expect to do lots of creative things," Berkowitz said. "These activities could include canoeing in the marshes, bird photography or studying marsh plants."

A complete calendar of events will be available in August.

Designed in 1941 by Birge and David Clark, the building was commissioned by philanthropist Lucie Stern as a gift to the City of Palo Alto. It was formerly used as the local Sea Scout base until the Palo Alto harbor closed and the Sea Scouts moved in 1986. In 2004, the City of Palo Alto offered the Environmental Volunteers a 40-year lease in exchange for renovating the structure and agreeing to use the space as a community resource for environmental education.

As part of the rehabilitation, the building was moved off of its old foundation onto a structure 4 feet higher than the original to prevent daily tidal flooding and vandalism, both problems the building faced in the past. Later, the building's interior and exterior were refurbished and landscaping added.

At Sunday's grand opening, EcoCenter volunteers and staff led nature walks around the surrounding Baylands, as well as a scavenger hunt and a bird-watching expedition. The free event also included tours of the center and exhibits, a raffle, music, an art show featuring local artists and a short opening ceremony.

Can you stay healthy without making more trash?
By Sherry Listgarten | 4 comments | 2,507 views

Think about helping others in our coronavirus-affected area
By Diana Diamond | 5 comments | 2,324 views