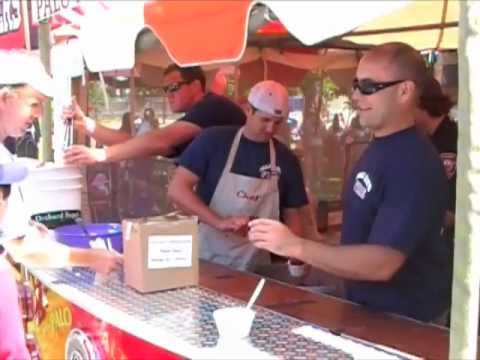 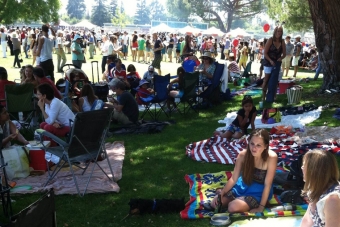 Mitchell Park in Palo Alto was swarmed with eager chili eaters Wednesday, July 4, for the 31st annual Palo Alto Summer Festival and Chili Cook-Off. Thousands of people attended the popular event, including many families. Attendees danced and scarfed down spoonfuls of chili while listening to live music by The Hitmen.

Seventeen chili teams competed for prizes ranging from "Best Decorated Booth" to "Best Overall Chili." There were also "People's Choice" and "Youth Choice" winners, as selected by attendees of the event. Chili team Elmo & the Old Quackers won "Best Booth" for its "Wizard of Oz" decorations that included an Emerald City facade.

One group that took part this year was Project Safety Net, which was founded in 2009 to implement a community mental-health plan for Palo Alto youth in response to a local cluster of teen suicides. Students were on the "Asset Builders Chili" team along with adults, promoting the concepts of positive adult role models and youth participation in the community.

"The cook-off is a great tradition, and this team that represents so many parts of the community is an embodiment of the spirit of Project Safety Net and the spirit of the cook-off," said Terry Godfrey, the team's head cook.

The event included disco, funk, soul and Latin music by The Hitmen; line dancing with Hedy McAdams; food vendors; and face-painting and other kids' activities.

In the "Corporate Division" -- which the city described as "any business, non-profit, community or service organization, or other formal organization from which you have recruited your team" -- the competing teams were Whole Foods Palo Alto, Wow! Catering, Palo Alto Professional Fire Fighters Local #1319, Ada's Cafe & the Magical Bridge, Team Vineyard, Palo Alto Family YMCA, The Counter and Asset Builders Chili.

In the "Open Division" (for any team not considered to be "corporate"), the competing teams were The Toques, Margarita-Meata Chili, Mas Bueno Chili, Rich Chili, Chili Hut, One Love, Good King Wench and Lass, Lounge Lizard Chili and Elmo & the Old Quackers.

Did you attend the Palo Alto Chili Cook-Off? Send us your photos.

Maytal Mark contributed to this story.


Most of the bikes using this bridge were without lights and the traffic was heavier than we expected for a midweek holiday evening, both exiting the highway as well as using the bridge to get to the fireworks.


The one safe bike/ped crossing in north Palo Alto is not useful for us in south Palo Alto when our destination is Shoreline or points south. That tunnel must be kept open to prevent accidents of those trying to access it (which they will even if closed) or using dangerous San Antonio.

Our family had a wonderful time at Mitchell Park enjoying the entertainment. We skipped the chili since the long lines did not appeal to our dog. Thank you Palo Alto Recreation for this awesome family tradition.

Note to Occasional Cyclist, you must not have heard about the recent opening of the brand new, beautifully designed bicycle/pedestrian overpass on the Permanente Creek Trail at 101. It takes you from Old Middlefield Road to Shoreline Park safely and legally.

Why wasn't anyone policing who was consuming alcohol? There were dozens of underage teens on the hill overlooking the dog run that were obviously drunk. There were cases of empty beer cans and teens in the trees breaking the branches. They had been there a long time.

A Pragmatic Approach to A Trillion Trees
By Sherry Listgarten | 4 comments | 3,955 views

Singapore's oldest cafe was about to open in Palo Alto. Then, the coronavirus hit.
By Elena Kadvany | 1 comment | 2,743 views

Repairing a Disagreement with your Beloved & “Physical” vs. “Social” Distancing
By Chandrama Anderson | 2 comments | 2,650 views

The University of California’s flexible policies during COVID-19
By John Raftrey and Lori McCormick | 6 comments | 2,610 views