Started with one recipient in 1985, 'Pursuit of Excellence' grows with new generation 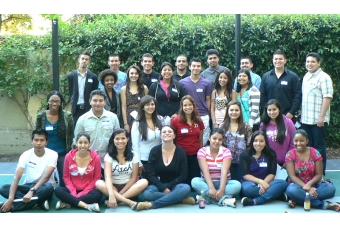 Recent high school graduates, who will attend college this fall with help from Pursuit of Excellence scholarships, gather for a celebration in a Palo Alto back yard last week. Photo courtesy of Dick Smallwood.

An informal scholarship program launched by a Palo Alto couple 27 years ago has grown to assist hundreds of students, with hundreds of thousands of dollars.

Jerry and Dick Smallwood started small back in 1985 when they awarded a $2,000 "Pursuit of Excellence" scholarship to a graduate of Sequoia High School who was heading to Cal Poly San Luis Obispo.

Over the years, the couple's friends and adult children got interested in the cause, contributing money and time. In the coming year, the group expects to award $400,000 in scholarship money to about 140 students.

The Smallwoods target high school seniors for whom the funds -- $500 to $5,000 -- can be a "tipping point" in their ability to attend a four-year college. Preference is given to students who have worked during their high school years. Renewal amounts are based on a student's need and performance.

"My husband graduated in 1957 from MIT on a complete scholarship and that was a huge thing for him," Jerry Smallwood said.

"Without it, he would not have been able to go, or would have had a very difficult time going."

Jerry Smallwood, a former teacher, also had a long interest in education and worked for 12 years as a classroom aide at Walter Hays Elementary School.

The Smallwoods' daughter, Carol Mullin of Palo Alto, has gotten involved in helping to manage the program and recruit mentors to engage with grantees.

The Smallwood's son, Scott, and his wife, Carol, who live in the Washington, D.C. area, award Pursuit of Excellence grants for graduates of three high schools in Virginia and Maryland.

Over the years, Pursuit of Excellence has assisted 324 students with more than $2 million, Mullin said.

'It's still all-volunteer, but a whole lot of new energy has come into the program," Jerry Smallwood said.

Hat off to Jerry and Dick for such a fantastic contribution toward the education of these special students.

Like this comment
Posted by Alice Schaffer Smith
a resident of Green Acres
on Jul 5, 2012 at 2:56 pm

Jerry is a Smith College graduate and exemplifies the best in quiet leadership. Amazing achievement.

VERY cool. From small seeds big oaks grow. Thanks to the Bigwoods!

Like this comment
Posted by Tired of Palo Alto Negatude
a resident of Palo Verde
on Jul 6, 2012 at 9:18 am

THANK you for this uplifting story,we clearly need more articles like this. We all know this is a wonderful community and it is so refreshing to see examples of its citizens being praised for doing good. So....thank you Palo Alto online.

This is well-deserved publicity for a program that has well-thought-out and commendable goals. Every year it reaches more deserving students, and continues to use all the donations for scholarships directly.

Congratulations to Dick and Jerry and all their family!

This is a wonderful read. Thank you to the Smallwoods & all of their donors. Congratulations to all of the recipients. Now the tipping point will spill over into the lives of so many more as these young adults garner more education and move forward with their lives.

The first few seconds after awakening; before I remember the virus
By Chandrama Anderson | 0 comments | 2,712 views

Can you stay healthy without making more trash?
By Sherry Listgarten | 2 comments | 1,992 views

Think about helping others in our coronavirus-affected area
By Diana Diamond | 4 comments | 1,899 views