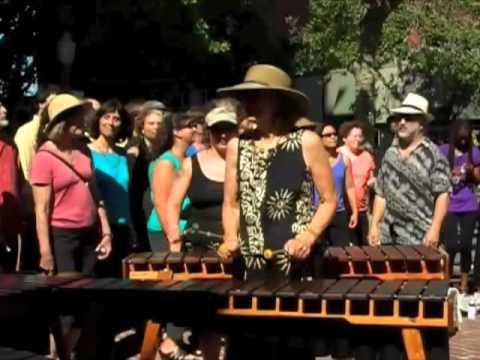 Like this comment
Posted by PAltan
a resident of Another Palo Alto neighborhood
on Jun 20, 2012 at 10:47 am

It was a lot of fun! We went just to walk down University with no cars, and heard some incredible music. (One group, I think they were called Electric Zombies, a young group from Sacramento -- these guys are going to be bigtime someday and those of us lucky enough to see them Sunday will say we remember when!)

I took snippets of video -- any way to upload to the PAonline site?

I too have some videos from Sunday. Please instruct us on how to download our videos. They are very enjoyable especially the Companiards.

Like this comment
Posted by Tyler Hanley
digital editor of Palo Alto Online
on Jun 20, 2012 at 1:06 pm

Tyler Hanley is a registered user.

I just learned from my son that the group I thought was the Electric Zombies was NOT -- someone had a t-shirt on so I assumed -- they are called Heroe's Last Mission (we got their CD -- it's phenomenal, incredible original songs, I'm not kidding, these guys are going to be big). Thanks for the instructions on uploading the video, I'll try to do that tonight and send the link.

Also got a CD by a Haitian folk singer who was out with his guitar -- is that T-Rosemond? His CD is so barebones, it doesn't even have his name on it. But wonderful, glad we got it. My son listened for a few minutes live and said, "This guy's good, let's get his CD." Then we stayed. So hard to choose among so much good music!

It was a great event! We heard marvelous music of all types, saw some great dancing (with great live music accompanying), and had dinner downtown and pastries from Paris Baguette which we've been meaning to try forever but didn't until now.

I can't begin to say how lovely it was to stroll around downtown with no cars! It was a blast, lots of families, kids running around.

Thanks to all the organizers! The last time I went was two years ago, and the event has really blossomed. Looking forward to next year!

The first few seconds after awakening; before I remember the virus
By Chandrama Anderson | 0 comments | 3,131 views

Can you stay healthy without making more trash?
By Sherry Listgarten | 4 comments | 2,518 views

Think about helping others in our coronavirus-affected area
By Diana Diamond | 5 comments | 2,333 views