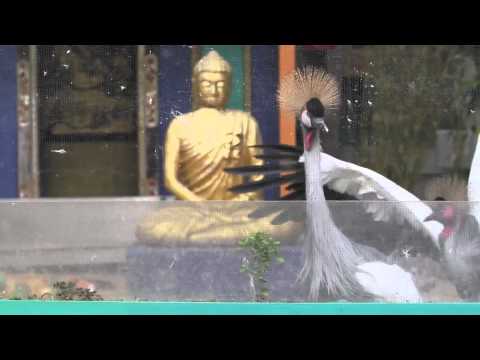 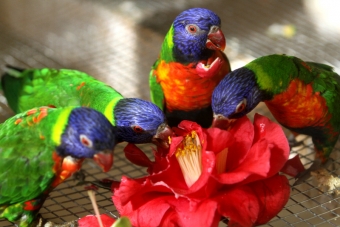 A family of Rainbow Lorikeets feed on the pollen of freshly picked flowers in their enclosure at Pandemonium Aviaries. Photo by Veronica Weber/Palo Alto Online.

"Mosaics are made from found and broken objects," she said over the squawks and chirps of the enclosures' inhabitants. "It's symbolic of what we do with birds."

Raffin is the executive director and founder of Pandemonium Aviaries sanctuary, which breeds non-native birds, some of which are endangered or rare. "Pandemonium" refers to the word for a flock of parrots, but it could be also be used to describe Raffin's schedule, which is consumed by caring for birds.

She said she spends 14 hours a day, seven days a week maintaining the sanctuary -- cleaning the dozens of enclosures, feeding and talking to the birds, and ensuring they're protected from the hawks that occasionally dive-bomb the cages.

Raffin's birds aren't for sale -- she hopes to establish healthy populations of birds in captivity so that one day they can be introduced into the wild. She focuses particularly on Victoria-crowned pigeon, blue-crowned pigeon, Bartlett's bleeding heart, Luzon bleeding heart and the Nicobar pigeon.

"The Victoria-crowned pigeon are really the modern-day dodo bird," she said. "If we let them go extinct, then we haven't learned anything in 600 years. And I don't think that speaks well of humans as a species."

Raffin said she has 7 percent of the world's under-conservation population of Victoria-crowned pigeons at Pandemonium.

Raffin also focuses on the green-naped pheasant pigeon, which has a worldwide captive population of less than 100, though it's not named on the "red list."

"They're not officially listed as endangered," she said. "However, reports from birders say they don't hear them any longer. We treat them as endangered. As far as I'm concerned they are."

Running the aviary is a complex endeavor. Some species will fight with other species when they're placed in the same enclosure. Also, the relatively mild climate of the Bay Area can be too chilly for some. They require either supplemental or to be brought into Raffin's house during the night, which she said can be "noisy" and puts some of her more chewable furniture in danger.

The first two concern genetics. Ideally, a population of any species should have a wide range of genetic variation so that there's a better chance the population will have traits suited to a situation or environment.

Loss of genetic diversity means that changes in their environment are more likely to lead to their extinction. For example, if not one bird in the population is resistant to a certain disease, that disease can easily wipe out the population.

A small, closed population also tends to lead to inbreeding. Closer breeding means a higher likelihood of recessive traits, which are typically negative.

"In terms of conservation, numbers matter," Raffin said. "You want unrelated individuals, and you want a lot of individuals. You can bring back populations from near extinction, but it's harder than if you have more."

Birds raised in captivity face significant challenges when they are reintroduced into the wild, Paul said. Often their captive upbringing means they don't know how to behave correctly in the wild, and they constantly find themselves encountering humans.

Raffin said Pandemonium is still years away from the point at which it will begin transferring its birds to an organization that can incorporate them back into the wild. She said she's optimistic about the future, although she sees reintroduction as a serious challenge.

"We keep getting better at things," she said. "I look at all the ways our generation has messed things up, and I look at all the solutions. There are a lot of smart and motivated young people right now who will dedicate their lives to solving these problems."

Raffin credits some of her optimism to the interns that work at Pandemonium, most of whom are recent biology graduates from schools across California. She said part of her mission is to impart her knowledge to the next generation.

In 2009 Pandemonium Aviaries officially became a nonprofit organization, but Raffin said she hadn't always planned on running a bird sanctuary. Rather, her plans evolved gradually as her priorities developed.

She began taking in birds in 1996, after finding a wounded dove on the side of the road that later died.

"In the beginning 90 percent of our birds were compromised in one way or another -- ill, injured or handicapped," she said.

But that changed in 2005 when she stopped taking in peoples' unwanted birds and started taking conservation of exotic non-native birds seriously. Today, none of the birds in her aviary are native to the United States.

Raffin said she couldn't think of a more worthwhile endeavor than saving a species.

"To do nothing would be incredibly wrong," she said. "There are so many birds that have gone extinct while people sat down and did nothing. Once they're gone, they're gone."

Thank you to Michele Raffin (and interns) for your deeply important work preserving various bird species. I have great respect for your remarkable mission to help save these glorious creatures. Best of luck to you.

Michele's aviaries and her collection of birds is one of the finest. Her dedication to the birds and the cause is unending. I am proud to call her a dear friend. Excellent article.

The first few seconds after awakening; before I remember the virus
By Chandrama Anderson | 0 comments | 3,133 views

Can you stay healthy without making more trash?
By Sherry Listgarten | 4 comments | 2,519 views

Think about helping others in our coronavirus-affected area
By Diana Diamond | 5 comments | 2,338 views