Gunn's Robinson puts on the brakes after a fast start 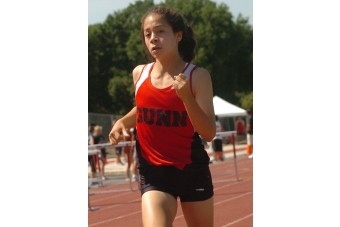 Gunn sophomore Sarah Robinson won the girls' 1600 meters in a personal record of 5:00.2 at the Bellarmine Invitational on Saturday before heading to Guatemala City with her U.S. Soccer Under-17 Women's National Team for the Ten Nations Tournament. Photo by Keith Peters/Palo Alto Online.

Gunn High sophomore Sarah Robinson got her 2012 track and field season off to a fast start by winning the girls' 1600 meters in 5:00.2 at the annual Bellarmine Invitational on Saturday.

The time is a seven-second personal record for Robinson and places her third on the Gunn all-time list.

Robinson was Gunn's only competitor because she'll be on temporary leaves from the team for the next few weeks.

Robinson is a member of the U.S. Under-17 Women's National Team that will be competing in soccer's Ten Nations Tournament in La Manga, Spain. The event starts Tuesday and runs through March 10 and features Under-19 teams from France, England and the Netherlands.

Robinson is the only U.S. player from Northern California and one of 18 players on the American roster, headed up by head coach Albertin Montoya.

Team USA, which is coming off two impressive wins over the German U-17s in Florida earlier this month, will open in Spain on Sunday against France before taking on England on March 6 and the Dutch on March 8.

Montoya is preparing his team for the CONCACAF Under-17 Women's Championships from May 2-12 in Guatemala City, Guatemala. The tournament finalists and winner of the third-place match will qualify for the 2012 FIFA U1-7 Women's World Cup that will be held in Azerbaijian from Sept. 22-Oct. 13.

Should Robinson be with the U.S. meet in Guatemala City, she'll miss the SCVAL De Anza Division finals on May 3, the SCVAL Qualifier (for CCS) on May 13 and be ineligible for the CCS semifinals.

Palo Alto High senior Tory Prati was one of 24 Bay Area high school players honored with a $1,000 scholarship by the Northern California chapter of the National Football Foundation & College Hall of Fame at a dinner last week in Burlingame.

Sacred Heart Prep grad Stephanie Clements was in goal for Santa Clara University during a 1-1 showing on Saturday in the Broncos' pool. Clements had five saves in a 10-5 win over Cal State Monterey Bay and had six saves in a 9-8 loss to Cal Baptist. Clements did not allow a second-half goal against CSMB.

Can you stay healthy without making more trash?
By Sherry Listgarten | 7 comments | 3,338 views

Think about helping others in our coronavirus-affected area
By Diana Diamond | 7 comments | 3,030 views

The University of California’s flexible policies during COVID-19
By John Raftrey and Lori McCormick | 6 comments | 1,695 views