Artist and designer Neal Ormond creates flamethrowers, armored vehicles in his back yard 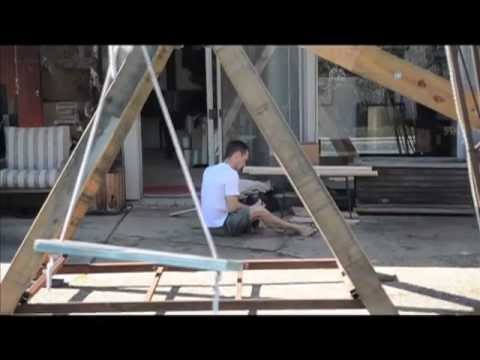 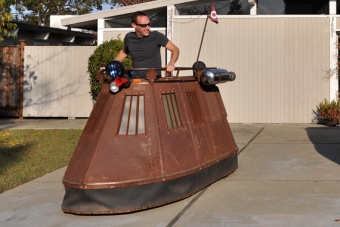 Neal Ormond prepares to hit the road in his 'Badonkadonk Land Cruiser,' a vehicle that goes about the speed of a golf cart. Photo by Kelsey Kienitz/Palo Alto Online.

It was a warm fall evening on the Stanford University campus several years ago and students were celebrating the Full Moon on the Quad, Stanford's annual bacchanalian welcoming ritual, which pairs incoming freshmen with seniors. Neal Ormond soared up in the JL421 Badonkadonk Land Cruiser, flames shooting out from the armored tank he built by hand. Students cheered and the Stanford Marching Band noisily cavorted among the celebrants.

It was an awesome sight, the students agreed.

The strange-looking vehicle with slit windows, which looks alike a cross between a submarine and an iRobot "Roomba" robotic vacuum cleaner, is Midtown resident Ormond's own creation.

His creations might not be found in a Sharper Image catalog, but they do carry that "awesome" factor.

Ever want a personal flamethrower? Ormond has made two. And he keeps one of the brass contraptions over the fireplace the way other men hang hunting rifles.

He has even constructed an observation platform from which guests can Bungee jump into the backyard pool.

And if those items might seem a little less than practical, Ormond doesn't fret. He's elegantly designed Swiss tube halogen lamps and tower lamps -- "three stainless steel sides, each perforated with hundreds of holes and lined on the interior with hanji paper." He also crafted a biplane table, which is described on his website as "two cantilevered planes of birch intersect a center spire of redwood. Glass surfaces cover plates of machined aluminum, through whose hundreds of holes shines a soft glow from the lighting within."

There is also the PT3, a recumbent tricycle with joystick steering, and a "comfy seat that actually leans into the turns for you."

A giant wall hanging of Leonardo Da Vinci's "Universal Man" hangs in his South Court home. Like DaVinci, his work combines physics, art and mechanical and electrical engineering to create "elegant designs," whether a vertebrate lamp of white Lycra stretched over circular fiberglass ribs or "light goggles" for illumination in a dark setting.

Ormond, 32, has worked on set designs for Dragon Theater in Palo Alto and has done stage-production jobs. His clients range from wealthy individuals to performance groups.

His influences have included Cirque du Soleil and the Blue Man group. The pyrotechnic projects came out of his attendance at Burning Man, he said. But he doesn't really know where the ideas come from, he said.

He lived in a house with students who were working on seven startups, he said.

"Business was never booming, but when it was looking like I'd have to get an office job, things would come through," he said.

"The best design is the most elegant. Most things are over-engineered and clunky. I look for simple, elegant solutions," he said.

As a child, Ormond said he created big, elaborate displays at the family home. Many of his skills are honed from tinkering and information he picked up on the Internet. He also counts his landlord and next-door neighbor, Victor Scheinman, as a major influence.

"There was a little bit of fate involved," he said, noting that Scheinman is a mechanical engineer who taught Ormond everything he knows on the subject.

Ormond's home is surprisingly neat. He works in his room or the back yard and keeps his project parts in a shed.

"I have reached a good medium with my neighbors," he said, adding that he strategizes his work hours to avoid unduly loud noises from grinders and air compressors.

The most extreme disturbance occurred when he was working on a pyrotechnic design. When he fired the flaming rockets all at once, they created a wall of sound.

But they were more interested than annoyed, he said. And they are occasionally entertained when a new product comes cruising out of the house.

And that is where the Badonkadonk -- a slang word meaning "big butt" -- comes in. With full lighting, a 1,000-watt sound system, and pyrotechnic-effects system including rocket pods, Ormond creates a sight. On a recent weekday, Ormond climbed into the top hatch and maneuvered the electric vehicle down to the street. Gliding along at 15 to 20 mph, the Badonkadonk looked as though it could hold its own in University Avenue traffic -- if it was street legal. Mostly, he uses it as a fundraiser for the Stanford Band.

The contraption fits his standard of elegant design using scrap materials and ingenuity: The window slats were inspired by a forklift grille he saw at a steel company, he said.

Ormond is modest in his assessment of his work.

"A lot of it is trial and error. There are no books on how to build a flamethrower," he said.

Neal Ormond is a modern day MacGyver. I can't believe that he made an armored vehicle in his backyard. The picture of the cruiser looks incredible. I want to see him cruising along town in it. Web Link

A Pragmatic Approach to A Trillion Trees
By Sherry Listgarten | 4 comments | 3,970 views

Singapore's oldest cafe was about to open in Palo Alto. Then, the coronavirus hit.
By Elena Kadvany | 1 comment | 2,901 views

Repairing a Disagreement with your Beloved & “Physical” vs. “Social” Distancing
By Chandrama Anderson | 2 comments | 2,662 views

The University of California’s flexible policies during COVID-19
By John Raftrey and Lori McCormick | 6 comments | 2,617 views