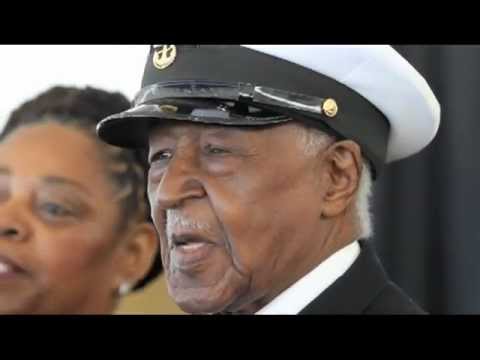 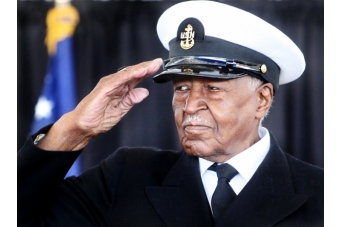 It was Carl Clark's jacket that the U.S. secretary of the Navy pinned the commendation medal on, but Clark told the hundreds of well-wishers at Tuesday afternoon's ceremony recognizing his World War II heroism that he was accepting the honor on behalf of all the military men who fought bravely for their country but, because they were black like him, "got very little recognition for what they did."

The award, the Navy and Marine Corps Commendation Medal with the Combat Distinguishing Device, was a "long, long overdue recognition" of Clark's heroism aboard the USS Aaron Ward in May 1945, when the ship was hit by six kamikaze planes, said Secretary of the Navy Ray Mabus, who flew in to Moffett Field for the ceremony in Moffett's Hangar 651.

In presenting the medal, Secretary Mabus acknowledged the military's record of racism that prevented people like Clark from being honored for valor. He spoke of African Americans who "risked their lives for their nation," fighting for American ideals and the promise of justice that the country hadn't fulfilled for them.

Clark's actions, he said, exemplify "a standard of conduct we should all aspire to." He noted that Clark has said he doesn't consider himself a hero. "But we do," the secretary said, the audience erupting in applause.

Clark's actions that day and into the night "played an undeniably significant role" in saving the ship and the lives of countless sailors, said Congresswoman Anna Eshoo, D-Menlo Park, who hosted the event. For two years, Eshoo worked to secure official military recognition for Clark, 95, a resident Menlo Park.

The ceremony was attended by family members who came from all over the state and country, by a multitude of friends, by Clark's fellow members of St. Francis of Assisi Church in East Palo Alto, and by people who had never met Clark, but were touched by his story of heroism and the injustice that delayed his recognition for 66 years.

As a military band played the national anthem and military passages ushering in Secretary Mabus and Eshoo, family members quietly wept. And when Clark slowly walked into the spacious hall aided by a cane, applause and whistles broke out, then morphed into a hand-clapping processional chant: Carl, Carl, Carl.

Also in the audience, tears streaming down her cheeks, was "life stories" writing instructor Sheila Dunec. It was Dunec who went to Eshoo with Carl Clark's story, which the veteran shared in 2000 during a World War II life stories course Dunec conducted at the Menlo Park Library. Originally a writing course, it evolved into a project that included oral presentations, a video and, several years ago, a staged event.

Clark told the crowd that "this never would have happened" if it hadn't been for Dunec. He thanked her and Eshoo, who "brought this honor to a conclusion."

Recognizing other blacks in the military who were never recognized for their service, he noted: "We were loyal Americans and tried to do our part."

Secretary Mabus described Clark's heroism aboard the Aaron Ward, but also his life after he returned to his country, stationed for a time at Moffett, then working for the post office and involving himself with painting, writing and community. "He led a good and productive life," Mabus said.

Clark joined the Navy in the 1930s, when blacks could serve only as mess attendants -- essentially, officers' servants, he told the Almanac in an earlier interview.

On the Aaron Ward, he was part of an eight-man damage-control unit designated to put out fires and take on other urgent roles if the ship were attacked. On May 3, 1945, Clark sprang into action when his ship was hit by the kamikaze planes.

When the first signs of the attack were apparent, Clark recalled, the seven other men in the unit huddled in one area of the deck, yards away from him. When the first plane hit, all seven men were killed. Clark was flung up against an overhead structure, breaking his collarbone; his helmet and shoes were blown off his body.

When the second plane neared the ship, Clark could see the pilot's face. Then, the plane hit, and "blew me right across the ship," he said.

With the rest of the damage-control team gone, Clark ignored his injuries and began an hours-long effort to extinguish fires -- including one that broke out in the ammunition locker, threatening to blow up the ship -- and to help his surviving shipmates. Although the fire hoses were meant to be handled by at least two men, he often manned then by himself. Without treatment for his own injuries, he worked through the night single-handedly carrying the injured to the medic ward, he said.

Although the ship's captain told Clark he would make every effort to have him awarded for his heroism, those efforts were unsuccessful. But that injustice ended today.

The country Clark defended didn't live up to its responsibility to him, "but today, we correct that omission," Mabus said.

The ceremony was attended by Clark's only living child, Karen Collins of Portland. His son died several years ago.

Clark's two surviving siblings also were there: Korea Strower, 93, of Washington, D.C., and Katherine Fletcher, 91, of Omaha. They and numerous cousins, nieces and nephews filled the first rows of the audience.

Also in attendance was Faye Lavrakas and Joanna Lavrakas, niece and sister-in-law, respectively, of retired Navy Captain Lefteris "Lefty" Lavrakas. Although Capt. Lavrakas died last August, before knowing that Clark's medal was approved, it was his testimony, as one of the last surviving officers of the Aaron Ward, that appears to have finalized the approval.

In a November 2010 letter to Mabus, Eshoo referred to Capt. Lavrakas' statement about expediting the award: "Please hurry up, Carl and I are both in our 90s and we need to correct this injustice for Carl."

Editor's note: A video featuring highlights of the ceremony will be posted later today (Wednesday, Jan. 18) on Palo Alto Online.

This man is a true hero. Thank you for your sacrifices, Carl Clark!

Like this comment
Posted by Bob
a resident of Another Palo Alto neighborhood
on Jan 17, 2012 at 7:28 pm

> Although the ship's captain told Clark he would make every effort to
> have him awarded for his heroism, those efforts were unsuccessful.
> But that injustice ended today.

There were 16M men/women in combat during WWII. About 80K were aircrew that disappeared on missions, and were never heard of again. It's hard to believe that all of those missing airmen, and the 200+K soldiers and sailors who also died fighting for the US did deserve accommodations also--but they didn't. The claim that Mr. Clark was the victim of "injustice" because he did not receive a medal during, or at the end of the war, is mean spirited, almost vicious. It's typical of people who have very little understanding of the military, and seem to want to trash it, rather than honor it.

If you happen to meet someone who fought in WWII, maybe of of their service might not have been as heroic as Mr. Clark's, but please take the time to say: "Thanks for being there". It's not very much, but it will make their day.

Bob - thank you for reminding us of the Tea Party point of view, on the day after Martin Luther King Day.

Better yet, if you see a WWII veteran standing in line to pay for lunch or a cup of coffee, pick up their tab. If they ask why, just tell them that it is an honor.

My husband has done this several times. One man who was wearing a Pearl Harbor survivors cap was almost in tears and said that it was the first time in decades that someone thanked him outside of a holiday or memorial ceremony.

We owe a lot to our veterans.

The first few seconds after awakening; before I remember the virus
By Chandrama Anderson | 0 comments | 3,133 views

Can you stay healthy without making more trash?
By Sherry Listgarten | 4 comments | 2,519 views

Think about helping others in our coronavirus-affected area
By Diana Diamond | 5 comments | 2,334 views