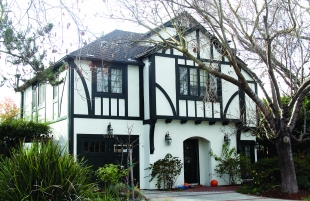 A home on South Court in the Midtown neighborhood of Palo Alto. Photo by Veronica Weber.

Absolutely devastated by this grim news. Have frequented (and loved) both Village Stationers and Accent Arts for years- cannot imagine not having them on California Avenue. Will have little reason to go to California Avenue after they leave. The place is becoming devoid of any attraction. Only Shuchat & Keeble, Paul's Cobblery and the Country Sun remain. For those who knew the street in better days, when the Bargain Box, Know Knew Books, the Avenue Florist, Draper's Music shop, Printer's Ink Books, Cho's, Monette's Pet Shop and the Fine Arts movie theater were still around, the changes have been ever bleaker. None of the Starbucks and other food places can even begin to make up for the loss of the above-mentioned businesses...

8 people like this
Posted by Resident
a resident of Another Palo Alto neighborhood
on Nov 27, 2015 at 8:37 am

We need some 30 minutes parking spaces in Midtown. There are some down by Walgreens and it makes a big difference as I can always find parking there. The Safeway lot is often full and there are times when just attempting to park at the ATM is impossible. Perhaps beside it should be 10 minute spots.

The problem is that people are parking and then spending hours in the coffee shops, at least that's my take.

The article says that Midtown is easy walking distance to Caltrain. That is less and less true these days. Oregon Expressway separates Midtown from California Ave and the Caltrain station. The recent Oregon Expressway remodel gives more priority to cars and less priority to pedestrians, making crossing the expressway on foot more slow and more difficult. Crosswalks have been removed at some locations and the pedestrian beg buttons at other crosswalks are very slow to respond (up to several minutes before the walk light turns on). We used to be able to walk from our Waverley Street home to the train station in 10 minutes. Now it takes twice as long and we am more likely to drive than deal with the hassle.

Report Objectionable Content
Email Town Square Moderator
1 person likes this
Posted by musical
a resident of Palo Verde
on Nov 27, 2015 at 11:47 am

@parent, I always walk down Colorado towards Caltrain. Cross Oregon Expressway on the sidewalk of Alma overpass, then cut through Bowden Park to the pedestrian undercrossing. In the good old days I'd use El Dorado and just run across the four lanes of Alma to walk along the tracks the final stretch to the station platform. You could buy your train ticket on-board. Ah, the wild west.

Is there a better Midtown article now than this old one from 2011? At least the home prices have been updated.

Report Objectionable Content
Email Town Square Moderator
7 people like this
Posted by parent
a resident of Midtown
on Nov 27, 2015 at 1:46 pm

@musical - Colorado is OK if you live near that street, but if you live closer to Oregon, taking Colorado is several extra blocks of walking. Also, walking next to the speeding cars on Alma is pretty spooky, especially during the evening rush hour (in the dark) and near the ramps to and from Oregon (where cars often run the stop signs and ignore pedestrians in the crosswalks).

Report Objectionable Content
Email Town Square Moderator
11 people like this
Posted by Frustration Town
a resident of Another Palo Alto neighborhood
on Nov 27, 2015 at 2:37 pm

I lived in Midtown for several years, then went to live in Europe for a few years before moving back to PA.

What a shock! I had gotten used to nice, smooth, quite roads and safe bike lanes in Europe. Upon my return I see the infrastructure here has gon to pot in spite of the outrageous taxes paid! The school system has gone downhill, too.

The worst deterioration, other than the roads, is the increase in traffic and businesses, but no equivalent increase in parking!

In particular, I have witnessed some ugly arguments by drivers competing for the dearth of spaces in the lot between Walgreen's and CVS. People without placards often park on the handicapped spaces, even in the striped spaces meant for wheelchair lifts! The confrontations continue to heighten and I fear may at some point turn deadly. This area needs a lot more parking NOW!

Another shock has been the lack of safe bike routes. Traffic is very heavy on Middlefield, even at non-rush hour times and on weekends, and the roads too narrow for the load. If someone has not already been seriously injured or killed, they soon will be. Much of Europe keeps cars, bikes, and pedestrians in individual separate lanes, many with curbs or berms for safety. Some streets are for residents only, and no one else may drive or park, or even bike ride on them. Other streets are for pedestrians only-- not even bikes or skateboards are allowed. Midtown could benefit from some of these as well. Not even the sidewalks or crosswalks are safe for pedestrians on Middlefield!

Flying: How to lower your impact
By Sherry Listgarten | 6 comments | 1,737 views