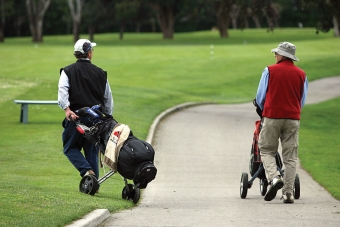 Like this comment
Posted by Bay Flooding too
a resident of Another Palo Alto neighborhood
on Dec 6, 2011 at 10:29 am

It's great to be taking care of flooding at the San Francisquito Creek. With the polar ice caps melting faster than expected, we also need to address tidal flooding with new levees.

And we need to make sure what's done at the golf course handles tidal flooding.

Like this comment
Posted by For the birds
a resident of Another Palo Alto neighborhood
on Dec 6, 2011 at 11:36 am

I agree with Larry Klein, the City needs to step back and see if there aren't better uses for the land.

The golf course is not very heavily used. In fact most of the players are retirees who will be dead in another 20 years.

I would like to see more playing fields for the young and the area closest to the Bay returned to marshland for the fish and birds. Meanwhile, more trees should be planted for the nesting herons.

I think a 9-hole golf course would be and excellent idea as it would serve more people who could actually use the course. Most of us work 40+ weeks and fitting in an 18-hole course play just isn't an option for us very often. I believe the course may actually come out ahead as more people would play. But, enough with the consultations! The Board must have all of the necessary information by now. Wasted money!

I think an 18-hole executive course would be great for junior golfers and families alike in Palo Alto. That might take up about 100 acres, leaving the rest to become a wonderful, family-oriented city recreational facility. The current course is outdated, boring and needs to be better integrated with the habitat there. Perhaps a golf course developer would like a 99-year lease on 100 acres to run a first class executive course with a first class instructional facility.

With the range of options available in the general area this golf course is unnecessary. I think this amount of land could be put to a much better use by including it in the baylands and making it part of the flood protection project.

Looking at the percentage of residents that use a golf course is not the only way to evaluate the useage. All public golf courses have non-resident users and rates, thus revenue to the City. This is a public course with easy access from the Bayshore, and players come from up and down the peninsula and across the bay.
The course does need upgrading, but to consider eliminating it all together is short-sighted and a recreational loss to all age groups. The game of golf teaches some very basic life values; read the Nine Core Values of the First Tee Program for young people.
The city of Palo Alto is fortunate to have an 18 hole golf course, especially in the open space area of the Baylands. We should not lose it.

Turn it into a duck club with a restaurant.

There are over 70,000 rounds of golf played at Palo Alto Municipal Golf Course. The pro shop and restaurant, separate independent operations, provide tax revenue to the city. The green fees and golf course provide over $300,000 in profit to the city. Kids that are playing soccer now will not be playing soccer when they become adults. They will be looking for recreational outlets, such as --- golf. Once again our city officials are being short sighted. Why aren't soccer fields considered further down Embarcadero Road. This open area could be used for soccer fields or play fields.

Flood "planes"? Are we talking golf course or airport?

Is the golf course profitable? Does it now bring in revenue or does the City subsidize it? How many residents play versus non-residents? How long would it take to recoup any investment? Under what conditions would it be profitable?

Too many times the Council has committed money because "it's only a few hundred thousand or a few million dollars". It's residents' taxpayer money. Until the above questions are answered any statements about the future and value of the course are opinions, not facts.


Our city is enjoying some fresh thinking about our baylands. It is about time. We have been trapped in a master plan that seemed locked and did not allow new ideas. Measure E shows our community can take a fresh look at land use plans.

Four major land uses in the Baylands are enjoying some fresh thinking: the airport, the landfill (compost), the water pollution control plant, and now the golf course. The Baylands study area begins on the bay side of Highway 101. The other land use down there feels pretty stale to me.

In the midst of this, why not take a fresh look at the Bayland Master Plan? We would enter the planning discussion with sharpened lenses: fiscal considerations, sustainability, and a fresh look at more modern recreational uses of land. How many folks play golf? How many folks have their own plane? What is a target demographic on use of public facilities - is 20% Palo Alto residents acceptable or too low? These questions will inform that we can do better.

(My own dream would be a swimming facility with a 50 meter pool in some repurposed land -- current pool space is jammed and inadequate. There are nearly a thousand Palo Alto youth swimmers plying their skills to grow athletically and to college - but they lack any 50 meter pool in town - a venue that is needed half the year.)

Sadly the problem with making any change is the "golf", "airport" and "park" constituencies are strong - especially when cornered. I recall that we could not even consider using 4 acres of airport land that are vacant dirt for composting was unacceptable - the mere symbolism of the loss was too much for the constituency. Council could not set a fresh course. The same outcome will be likely for the use of the golf course.

Over the last 7 yrs - the golf course has averaged almost $3m in revenue. Operating expenses are $2m+ Leaving average operating profit of $900,000. A capital improvement project in 1998 is being repaid at $550,000/yr and improvements to the driving range is being repaid at $94,000 year leaving a net cash flow to the city of a little under 300,000/year. The 94,000/yr reimbursement ends in 2012 and the larger $550,000 ends in 2018 leaving profit to the city of $900,000+ to the city. Doing a first class job of re-configuring the course should increase play from under 70,000 rounds to 80,000 rounds at an average fee of $30/round thus adding $300,000 to the bottom line.It is also likely that the fees can be increased by $5/round adding $400,000 to the bottom line. Operating expenses generally do not change mush with the increase in play because maintenance cost does not change much. These are speculative figures but it is entirely posssible that the course can produce $1.6M per year for the city (after 2018) and the beauty of it is the GOLFERS PAY THE FREIGHT. The city will probably have to advance (loan) the course some money but that will be paid back by the golfers.
PLAYING FIELDS:
When I wasw growing up in Palo Alto all the schools opened their fields to play after school and all day in the summer supervised by at lease one male and one female college student. All of the fields were thus put to use all the time and there was even inter-playground competition. The city has abandoned this use of our facilities and should be resurrected. I see a lot of fields not being used as we used to do and this process could be used to make more playing fields available for soccer etc.
THE CHOICE:
A mix of fields and golf WILL NOT increasse the revenue to the city. Think of what Parks and Rec could do with $1.6m per year all paid for by golfers... It is possible if we are smart and patient.

Flying: How to lower your impact
By Sherry Listgarten | 7 comments | 1,761 views