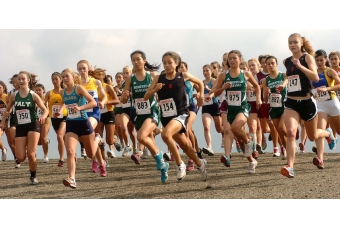 Gunn sophomore Sarah Robinson (154) ran the second-fastest sophomore time ever at Crystal Springs while senior Kieran Gallagher was the Titans' No. 2 finisher while helping their team take second at the CCS Championships on Saturday and qualify for the state meet. Photo by Keith Peters/Palo Alto Online.