An award-winning day for Stanford on its homecoming 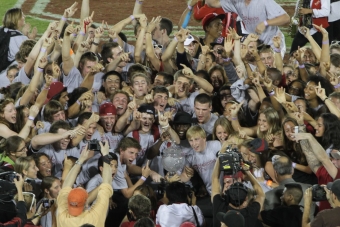 Stanford athletes crowd around the Learfield Sports Directors' Cup trophy at Saturday's football game after the Cardinal athletic program was honored for a 17th straight year as the nation's best. Photo by Rick Bale/Stanfordphoto.com.

Stanford beat University of Washington 65-21 not WSU. The win over Washington State was a week earlier, 44-14