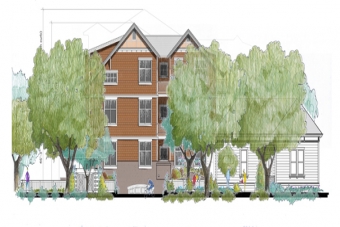 A rendering shows what the project at 445 Calderon Ave., Mountain View, will look like. Rendering courtesy of Mountain View Cohousing.

Having a comfortable and efficient home in a neighborhood where you have a social and physical support system is good common sense. I’d suggest learning more about cohousing, a good resource is Creating Cohousing: Building Sustainable Communities by Katie McCamant and Charles Durrett

Posted by Name hidden
a resident of Palo Alto Hills