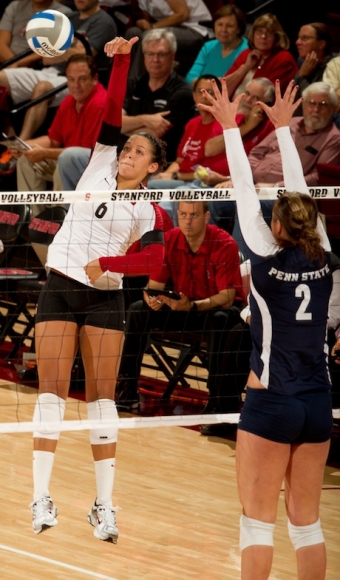 Stanford sophomore Rachel Williams (6) finished with her second double-double of the year, leading the team with 22 kills and 12 digs as the No. 3 Cardinal volleyball team upended four-time defending NCAA champion Penn State on Friday night. Photo by Bob Drebin/Stanfordphoto.com.

Stanford played pretty well, especially in the match-clinching fourth set, but Penn State dug their own grave with errors in every phase of the game. Stanford sophomore OH Rachel Williams had another awesome match. If she plays that well against Florida in tonight's championship match, she will be a strong candidate for both Pac-12 and National Player of the Week.