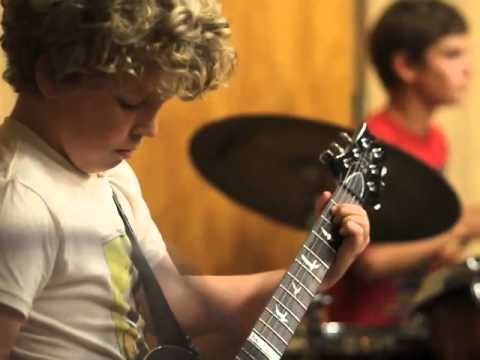 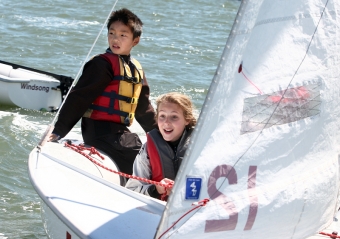 In Redwood City, aspiring sailors ages 8 to 15 can learn to maneuver sailboats or enhance their seamanship skills. Above Los Altos Hills, curious city-dwellers can milk a cow, shear a sheep and sleep under the stars. Even right here in Palo Alto, wannabe rockers can jam in a band and perform in a rock concert, all in one week.

Guitarist Reid Devereaux dips his head, letting his long, dark, curly hair swing and his knees bounce. His fingers nimbly pluck the strings as his band, Da Bomb, plays a cover of the Beatles' "Oh Darling." Two dozen spectators tap their feet in time with the music. When the song ends, they burst into applause. Reid, 9, looks up and smiles.

Hands shoot up across the room. Today is the second-to-last day at Summer Rock Camp, held at First United Methodist Church in Palo Alto, and kids are eager to exchange feedback in preparation for tomorrow's performance. Many of them are students (or friends of students) of director Michael Finley, a guitar and bass instructor, while others simply share the enthusiasm for rock 'n' roll. Finley zigzags within the crowd, alternately critiquing the musicians and listening to student reactions.

Four seven-hour days of music-theory classes, lessons and band rehearsals have not decreased the enthusiasm of Jonny Rohrbach, 13, a guitarist for three months who learned to play bass at camp this week. His bright eyes widen as he describes his experience in his band Don't Tell Mama, She'll Jack My Swag, composed of (and named by) himself and four Jordan Middle School classmates.

The camp is "just a fun, safe place where you can give constructive criticism and stuff," he says.

After the final band performs, everyone quickly disperses into practice rooms, where they rehearse with their assigned band members and counselors until 4 p.m. "We work the kids really hard," Finley says. "I don't think they've ever worked this hard."

The next night, it all pays off. The performance room is packed with proud parents and plenty of digital cameras. Red Star, the first band in the lineup, takes to the stage, and drummer Jade Hsin, 8, looks out at the crowd. Before the band's rendition of Bon Jovi's "It's My Life" begins, Jade catches someone's eye, quickly looks down at her drumsticks, and grins.

Seven children form a wide semi-circle and advance methodically across the furrowed field, clapping. It may look like your run-of-the-mill summer-camp game, but it has a purpose. The children's subjects, 14 of them, start and scramble, darting and colliding with each other before retreating to the corner. On their first try, seven city children have successfully herded sheep.

Tucked away in the Santa Cruz Mountains in Los Altos Hills, Hidden Villa teaches environmental stewardship and social justice through simultaneous exposure to land, animals, kids and counselors from all walks of life. According to Marc Sidel, associate director of development, 40 percent of the residential campers -- the ones who stay overnight -- come on scholarship from diverse and underprivileged Bay Area communities.

"People become comfortable with one another in this setting," he says.

The sheep group is now shearing wool. Olivia Schenune, from San Mateo, shows off a soft handful she extracted. "I like how calm they are," she says. Kohei Tsuchitani, from Sunnyvale, thinks they're soft and cute.

When their time is up, the children hug their new ungulate friends and express their gratitude -- "thank you, sheep!" -- as they move on to greet day-old piglets.

Similar flocks of campers pass by on the trails, singing and chanting as they go. Early the next morning, in a low-lit shed, one group surrounds a cow named Cleo. The yawning kids, some still in fleece pajama bottoms from their night under the stars, practice milking techniques on their counselors' thumbs.

Pinch the top and guide the bottom. They giggle as Cleo's milk, which will be used to feed the pigs, fires into the pail. When the job is done, the campers are awake and ready for more. A plea is made. "OK, you can be late for breakfast," a counselor concedes.

Air pushes through the sails, sheets and shrouds of the docked dinghies like they're 20-foot-high wind chimes. It's unusually gusty on the bay, which means it's extra noisy. And cold.

"Lay down," suggests an instructor partially in jest, and many Stanford Sailing Summer Campers heed her advice. They huddle on the dock in board shorts, long-sleeved shirts and life jackets with first names duct-taped on backs. They may be cold, but they're beaming. When one of the boats approaches, they each clamber up for a spot on the next educational voyage.

Michael Liebsch, from Woodside, had never sailed before attending the camp for six straight weeks last summer. "On the very first day, you go out into the bay," he says. "It's just fun."

"The whole point is to learn the basics of sailing and have fun," says Molly Vandemoer, who runs the camp with her husband John, Stanford's head sailing coach. Curriculum includes learning the parts and nomenclature of the International 420 dinghies and preparing them for launch each morning. The campers then spend until 4 p.m., minus lunch, on the water, four or five to a boat, along with an instructor.

"I have a knack for it," says Parker Russell, from Redwood City. He and his brother Nick discuss buying a sailboat of their own someday. They step, smiling, off a dinghy and onto the dock, where young sailors gather to tell tales of heroism on the angry waters. Some talk of avoiding capsizing, while others brag about having gone down.

One boy isn't keen on returning to sea, and others rally around him, urging him on. They chant his name, which they needn't consult the duct tape for. On only their second day together, the camaraderie is clear. After a short time, the boy rises, and the wind whips his hair backward, toward the green suburban hills.

Who are the adult (or older) singers in the above video? Also, the little girl singer was quite good as well.

Like this comment
Posted by Anonymous
a resident of Another Palo Alto neighborhood
on Jul 23, 2011 at 8:10 am

Why are the adults doing most of the singing at Summer Rock Camp?

there aren't that many singers who sign up. So instead, a lot of adults have to fill in. Normally there are only 2 or 3 singers, and they have particular vocal ranges as well. Paul, the man with long black hair has a deeper voice than most people that sign up, so he has to sing lower songs. The other singer is the singing counselor, and helps the singers work on their songs.

A Pragmatic Approach to A Trillion Trees
By Sherry Listgarten | 4 comments | 3,961 views

Singapore's oldest cafe was about to open in Palo Alto. Then, the coronavirus hit.
By Elena Kadvany | 1 comment | 2,805 views

Repairing a Disagreement with your Beloved & “Physical” vs. “Social” Distancing
By Chandrama Anderson | 2 comments | 2,652 views

The University of California’s flexible policies during COVID-19
By John Raftrey and Lori McCormick | 6 comments | 2,613 views