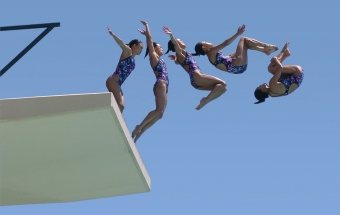 Stanford graduate Amy Chow, who previously won Olympic medals in gymnastics and even dabled in pole vaulting, is now throwing herself into diving when she's not working fulltime as a doctor. Photos by Keith Peters/Photo illustration by Paul Llewellyn.

When we last saw Amy Chow on a competitive stage, the Castilleja School grad was launching herself skyward in the pole vault. Prior to that, she was an Olympic gold medalist in gymnastics.

Chow, however, later dropped out of sight when it came to being an elite athlete. Her life headed in a different direction as she became a doctor of pediatrics and was licensed as a physician and surgeon.

Chow, however, longed for the challenge of being a competitive athlete. At the urging of a friend, she started diving with the Stanford Masters in 2008. She caught the eye of Stanford diving coach Dr. Rick Shavone, who told her he'd be interested in coaching her.

"I pulled her aside one day," Schavone recalled. "I said, 'if you want to do this seriously, I'll coach you.'"

All she needed to do was ask and, eventually, she did.

"Right after the first meeting, I said 'let's play it by ear,'" Schavone said. "She was an interesting project to undertake. She's a great, great athlete -- an amazing athlete with an amazing attitude."

The former gymnast-turned-pole vaulter is now a diver with unlimited potential, but with limited time. Chow is competing in the Zone D qualification meet, Friday through Sunday, in Tucson, Ariz. There, a top-12 finish would qualify her for the AT&T National Championships in Los Angeles on Aug. 9-14. From there, the next step would be the 2012 Olympic Trials.

'That's a very big step for Chow, who is now 33 and just celebrated her one-year wedding anniversary on July 10 with Dr. Jason Ho, an orthopedic surgeon. Chow works in pediatrics for the Palo Alto Medical Foundation in an office in Dublin. She trains with Schavone twice a week and has made quite a splash on the tower.

In less than a year, she has gone from a recreational diver to a national-class athlete once again.

Schavone, however, said the grand experiment could end before it comes to fruition.

"If she qualifies for Olympic Trials, then she'll have to decide," he said. "She might not have the time."

Chow is just taking things one step at a time. She has no expectations, nor does she consider herself a competitive diver.

"I'm having a lot of fun with it," she acknowledged. (But) "I'm not that serious . . . It's just something that you do. You can make a mistake and someone's life isn't on the line."

Chow is so low key at the moment that she had no idea that she could qualify for the Olympic Trials with a top-12 finish at nationals.

If Chow somehow qualifies for the Olympic Trials next summer, that would give Schavone three divers at the meet -- a rarity in the sport. He'd have defending national champ Cassidy Krug and current incoming freshman Kristian Ipsen joining Chow.

Schavone has every right to look that far ahead just because Chow has come so far in so little time.

"This is so much further than she expected," Schavone said.

Chow's best event could be the tower, which is also an event where the United States may not have anyone qualified for the 2012 Summer Games in London. Whether the U.S. has any berths in the Olympics will be determined at the 2011 FINA World Championships that begin Saturday in Shanghai, China.

"The women's tower (in the U.S.) is weak," Schavone said of the talent base. "It may be the only event (at Worlds) that we don't qualify in (for the London Games)"

That might not be the case had Chow started earlier with Schavone and made the progress that she has.

"I've coached some of the best (divers) in the U.S.," Schavone said, "and no one has trained tower like this."

During a training session on March 6 at Stanford, Chow plunged off the tower some 26 times. Schavone said that's unheard of for an American diver.

"I can't imagine anyone but the Chinese doing that," he said. "I've never seen anything like that."

Interesting enough, Chow is part Chinese. Her parents, Nelson and Susan Chow, emigrated to the U.S. from Shanghai and Hong Kong, respectively. Amy was born in 1978 with San Jose as her hometown.

Chow began her gymnastics training in 1981 at age 3. Her mother wanted Amy to be a ballerina, but none of the schools would take a child that young. That led Amy to the West Valley Gymnastics Club, where her career got under way.

Fast forward a few years to 1994, when Chow competed in her first international competition -- the World Championships in Dortmund, Germany -- as a member of the U.S. National Team.

In 1996, Chow left her mark on the sport when she competed for the U.S. at the Summer Olympics in Atlanta. She won an individual silver medal on the uneven bars, her best event, and earned a team gold. She and her six teammates later were dubbed the "Magnificent Seven" for becoming the first U.S. women's gymnastics team ever to win a team gold in the Olympics.

Four years later, Chow made the U.S. team again for the 2000 Olympics in Sydney, Australia -- finishing second in the all-around at the Olympic Trials. To accomplish this, Chow took time off from her studies at Stanford, where she was working on her Biology undergrad degree.

The U.S. team finished fourth, but eventually was awarded the bronze medal when the third-place team from China forfeited its medal due to having an athlete on the team under the minimum age of 16. Chow and her teammates from 2000 finally received their bronze medals in 2010.

Chow also had been diving for nearly two years by then, stopping by Avery Aquatic Center in the evening after finally giving into a friend who had been "bugging me" about it.

"It was Masters diving in the evenings," Chow said. "You'd stop by whenever you had time."

When Chow moved to the East Bay to begin her private practice, she had to find other times to dive. That led her to Schavone, the tower and yet another challenge in what has been an interesting and successful athletic career.

As for her first time on the tower, which rises more than 30 feet into the air?

Chow dives a lot off the tower these days, and quite well. Whether this leads to the Olympic Trials and Olympic Games, one can only guess.

Right now, Amy Chow is having fun and testing herself once again. That just may be all she needs.

Update: Chow suffered an injury on the final dive of her final practice before heading off to the zone qualifying meet, thus was not able to compete in Tucson last weekend.

Wonderful woman Dr.Amy Chow! I met her at the US Masters Diving National Championships, August 2010 - at the UCLA pools. Congrats on your medals, Amy, and good luck for many, many more years as a Masters diver - and role-model for many a youngster! See you at future meets...(from Helen Bayly, 74, Masters diver: Troy, NY).

The first few seconds after awakening; before I remember the virus
By Chandrama Anderson | 0 comments | 3,635 views

Can you stay healthy without making more trash?
By Sherry Listgarten | 6 comments | 3,011 views

Think about helping others in our coronavirus-affected area
By Diana Diamond | 7 comments | 2,756 views