Hall, Allen feeling good but not satisfied with results 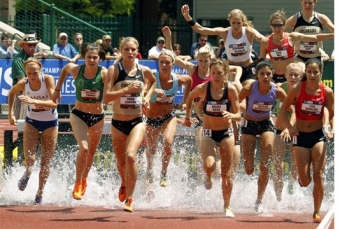 Sara Hall (on top of the hurdle) finished fifth in the women's 3,000 steeplec hase at the USA Track and Field Championships in Eugene on Sunday. Photo courtesy of USTAF.