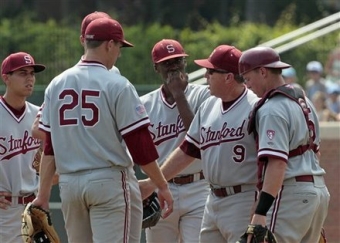 Stanford coach Mark Marquess discusses the situation with Mark Appel (25), Brian Ragira and Zach Jones during Friday's 5-2 setback to North Carolina in the first game of a Super Regional. Photo courtesy of AP.

Thanks to Adam for the fact check.