ARTS: The history of sound 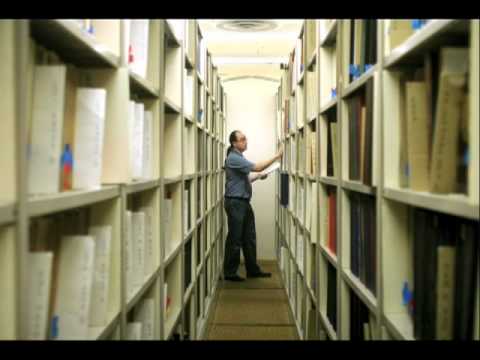 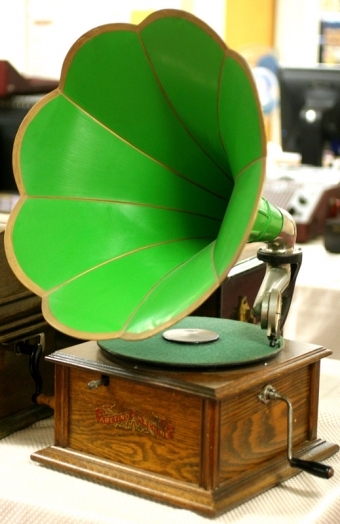 To the Stanford student pausing between classes to listen to her favorite song, sound is as small and simple as a pair of white earbuds and an iPod shorter than her thumb.

Below her feet, sound is thousands of things. It's reel-to-reel tape players the size of carry-on luggage. Shellac 78s and vinyl LPs. The earliest wax cylinders, and gleaming wooden phonographs to play them. Even a few 8-tracks.

Down in the basement beneath Stanford's Braun Music Center, the university's Archive of Recorded Sound is a growing cornucopia tracing the history of humans' efforts to conserve spoken words, music and other sounds for posterity.

The archive stretches from the 19th-century wax cylinders developed by Thomas Edison all the way to digital files. Together with an off-campus storage facility, the collection encompasses some 350,000 items. Visitors can hear Eleanor Roosevelt's voice for the first time, gaze upon autographed photos of early-1900s opera divas, or watch an archivist wind up a silver music box.

"It just kind of brings the past back to life," says Jerry McBride, head librarian of the archive and Stanford's Music Library.

Past meets present in the archive's listening room, where machines from earlier decades are patched into a computer for making digital copies of recordings. But there's something special about hearing an album or a poetry reading on the device it was meant for. Listeners can choose from turntables and cassette decks, or players for CDs, digital audiotape and VHS and Betamax videos. A reel-to-reel tape player atop a tower of machines looks down on its neighbors, seeing the past and the future.

In other rooms, shelves are packed with books and periodicals on the recording industry, along with the recordings and their many accoutrements: liner notes, sheet music, concert programs, photos and record catalogs. Related videotapes and video discs abound as well.

Neatly stacked boxes of newer acquisitions wait to be cataloged. LPs are everywhere -- some of the very same LPs, in fact, that might have been new when the archive was founded in 1958.

Music librarian Edward Colby started the archive when the popularity of 78-rpm discs was giving way to a love for LPs. Libraries were starting to collect LPs, and he wanted to make sure the older items weren't lost, McBride says. Stanford graduate William Moran, who had an interest in vintage recordings, was also an early force in helping the archive grow.

Over the years, the collection has indeed grown, fueled mostly by donations. One never knows what will arrive in boxes. While archive staff members don't seek out phonographs, for instance, one might show up as part of a donated assortment.

At the moment, McBride is surrounded by many such pleasant surprises. A corner of the archive's front room is filled with wooden cabinets that house phonographs. Unlike today's minimalist iPod speakers, these were often large decorative pieces of furniture with ornamental carving.

McBride turns to a tabletop phonograph for cylinders. Its smooth wood looks pretty good for being from 1903. "This recording that I'm going to play is about 100 years old," he says matter-of-factly, holding a dark wax cylinder.

When the cylinder spins on the phonograph, fuzzy-sounding men's voices emerge from the machine's large horn. McBride gently advises a visitor to stand right in front of the horn, and the sound gets clearer. It's "The Jolly Blacksmith," a chipper novelty number sung by the Edison Quartet.

"They were making these cylinders up until about 1929," McBride says. "Then discs really took over."

Moving forward in time, McBride places a disc on a record player that was state-of-the-art in 1927. Its gold-colored arm gleams as he winds up the machine. Like many of the phonographs in the room, it's mechanical instead of electronic.

"It's just the way Edison did it in 1877, only with a bigger horn and more sophisticated equipment," he says. Fittingly, a piece of brass music comes trumpeting through the horn.

McBride has spread out several other kinds of discs on a table, including huge ones used by radio stations. A disc might have an entire program on it. Here, one contains several spots for Burgermeister Beer. Its label sports a cheerful red logo for the "Song-ads" company, with a treble clef for the S.

The cylinders and older, thicker discs look remarkably sturdy. McBride notes that they last longer than some of their newer cousins, as anyone who's gotten a cassette tape hopelessly snarled can imagine. Still, cylinders can scratch, and will break if dropped, he says. He's careful to pick up discs by their sides or in the center, or sometimes with white gloves.

"Old discs can be brittle," sound cataloger and project archivist Frank Ferko notes later. "When you handle them, it's like glass."

One can easily wax nostalgic over vinyl. Less familiar to modern eyes are the wire tapes that McBride has stored in a little box. Popular in the 1930s and '40s for dictation machines, they saved sounds on thin wires.

McBride unrolls one to display the wire, which looks like a hair. "If it gets out of control, it's like your worst Slinky nightmare," he says.

This recording method fell out of favor when reel-to-reel came in. It had better fidelity and was easier to work with, McBride says.

Also on the table is the scrapbook of Mario Ancona, an Italian baritone who died in 1931. Photos of his fellow singers fill its pages, many crowned with looping autographs. Ancona's memorabilia are some of the many donated personal collections. The archive recently acquired more than 1,000 discs and reels from the collection of the late violinist Jascha Heifetz.

Another assortment has yielded a small exhibition. On the ground floor of the music library, glass cases are filled with concert programs and photos assembled by the late Jack Lund, an active Bay Area arts patron.

And archive staff are still cataloging boxes from the Ambassador Auditorium, the Pasadena concert hall that had its heyday in the 1970s, '80s and '90s.

The heart of the archive's jazz holdings is the Monterey Jazz Festival Archive. The festival donated all its recordings dating back to its first year, 1958, together with posters and programs.

McBride clearly has a particular appreciation for jazz. His eyes light up when he mentions the collection of present-day drummer Peter Erskine. Recently, McBride watched a home video of Erskine playing with the late pianist Stan Kenton.

"It was an early camcorder. We didn't even know if we could play it," McBride says. "It was just really thrilling to see."

McBride is also a musician with a degree in clarinet performance. His first job was as an archivist at the Arnold Schoenberg Institute in Southern California. Seeing and hearing the past has given him a greater understanding of musical trends, especially in classical music, he says. In the early 1900s, recordings were more like live performances; now musicians sound "much more exact and precise," with nary a note mistake.

Vocal styles in popular music were more influenced by opera, and singers once had to fill a room with sound on their own. The advent of microphones made more intimate vocalizing possible. Before the mic, McBride says with a laugh, "you couldn't do crooning in an auditorium."

Info: The Stanford Archive of Recorded Sound is in the Braun Music Center at 541 Lasuen Mall, Stanford University. It's open to the public on weekdays from 1 to 5 p.m., with items from the Jack Lund collection on display through July 4. Listening appointments are required, as recordings must be handled by archive staff. (The staff also suggests that visitors seeking a specific item call ahead, as it may be stored off-site.) Call 650-723-9312 or go to https://lib.stanford.edu/ars.

My early connection to Stanford's Archive of Recorded Sound was with Garrett Bowles, former music librarian. That was in the 1960s and 1970s when I was Assistant Director of SUL. I would like to find a good home for my personal collection of recordings and plan to contact Jerry McBride to see what can be arranged. All my recordings have been played only on professional quality transcription hardware--never on record changers. Some of my LPs date from 1948, the year when long playing records started. I also have a small number of 78 rpm discs in good condition. Somewhere I have a complete listing of everything.

Every good wish for success of Stanford's Archive of Recorded Sound.

There was an Archives of Recoded Sound Committee. I was appointed to it because of my position as Head of the Acquisitions Department. We were supposed to help Ed Colby in anyway we could. It consisted of Ed. myself and an English professor, whose name escapes me. William Moran may have been on the committee in absentia and he rarely attended our noon time meetings.There was relatively little we could do since the Archives was not funded and donations came through the efforts of Bill and a few friends. One interesting acquisition was from an opera singing who lived in San Francisco. I drove the Acquisition Department truck, my VW Van, to San Francisco and returned with a load that tested the metal of the Van.

Other than such occasional forays my contribution to the Archives was minimal. The Committee would meet monthly in the library staff lounge at noon. We tried eating our lunch while Bill and the anonymous English professors would do all in their power to keep us laughing rather than eating. It was a great time and I enjoyed my non-contribution.

What a great time it was.

These local restaurants are donating meals to Bay Area residents in need. Here's how to help.
By Elena Kadvany | 6 comments | 10,839 views

Coronavirus: Plan ahead now for a big outbreak
By Diana Diamond | 18 comments | 3,912 views

Will the Coronavirus Save Lives?
By Sherry Listgarten | 29 comments | 3,737 views