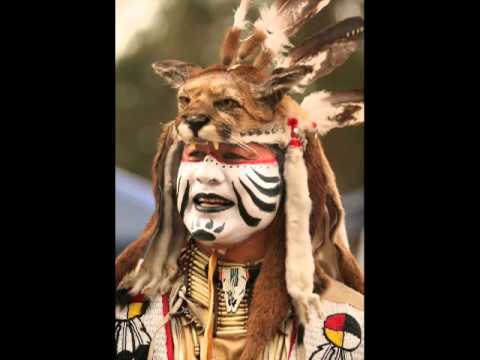 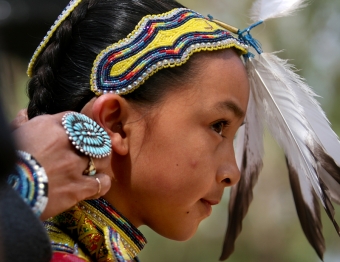 Jaydean Randall of the Navajo and Sioux tribes gets ready to compete in the teen girls fancy dance competition. Photo by Veronica Weber/Palo Alto Online.

Sporting the enormous striped feathers of the golden pheasant as well as seed pods that rattled around their shins, a procession of dancers drew an enormous crowd at the Stanford Powwow last weekend, entering the arena to the sound of conch shell horns amid a cloud of incense.

For 40 years the Powwow has drawn thousands from the Bay Area and beyond, bringing together a host of dance and musical groups representing Great Plains tribes as well as Southwest Native cultures. It is the largest inter-tribe gathering on the West Coast and the biggest such event in the country that is student-run, hosted by the Stanford American Indian Organization (SAIO).

The Bay Area Aztec Dancers began with an invocation saluting the four directions, as well as the sun and mother earth.

"It is the traditional way of asking permission from our ancestors and from the spirit of the land to perform," dancer Xochi Tli said.

"This Powwow was created in 1971 as a showcase for Native American culture, in response to the old Stanford logo, to help people understand that we're not just caricatures," explained Vananda Yazzie, one of three university juniors responsible for co-chairing and putting together the event. "And I think it still serves that function, educating people who don't know very much about Native American culture."

Indeed, when they weren't swarmed around the main performance arena, or treating themselves to Indian tacos and fry-bread topped with strawberries, a number of visitors took full advantage of the dancers dressed in colorful traditional costumes, many of whom were more than willing to answer questions about their attire and heritage.

"You do get some naive questions," admitted Marcos Madril from San Jose, representing the Pascua Yaqui tribe of southern Arizona in the Men's Northern Traditional dance contest. "But I enjoy making sure that the culture is kept alive, and I'm actually part of a group that goes around visiting schools to talk about Native history and culture."

His wife, Crystal, was not dancing, but she was also dressed in traditional gear, wearing a costume characteristic of the Jicarilla Apache, an Athabascan indigenous group mostly located in western New Mexico.

Elsewhere, installations celebrating the indigenous cultures of Central America and the World War II veterans of the Muwekma Ohlone tribe drew in crowds, as did the two Mexican gray wolf dog hybrids being showcased by Nevada-based nonprofit US Wolf Refuge, and Newt, a red tail hawk.

"Powwows help increase people's awareness, allowing them to see and experience new things," said Robert Leroy of Oakland, also competing in the Men's Northern Traditional contest. "And it's also a chance for my boys to get in touch with our culture."

He pointed to his two children dressed, like their father, in the colorful traditional attire of the Omaha and Northern Ponca tribes.

Many participants attend or compete in events like this across the country, sometimes every weekend.

"I go to powwows all over California, and this year I'm also going to one in Montana," said Kyle Conluhiltschen, a 15-year-old representing the Conville coalition of tribes in the Traditional Teen Boys event. Having been taught the dance by his uncle, Kyle has been attending Stanford Powwow since he was a small child.

"I can't count how many years I've come to this one, it's been so many," he said.

Indeed, for many participants, a significant component of keeping Native culture alive is not just in informing outsiders but the shared experience.

"It's less a competition and more of a gathering -- meeting old friends and making new ones," Leroy said. "And this year there are a lot of tribes represented, a collection of people all the way from Montana to those representing Aztec culture."

The diverse age range of the Bay Area Aztec Dancers' more than 100 dancers -- hailing from San Jose, Salinas and across the whole East Bay -- spoke to the shared vision and sense of family and belonging at the event. Elsewhere, children and teenagers representing the Choctaw, Nez Perce, Cherokee and other Native American communities from across California gathered in groups, old friends from other powwows.

"It's fun to see a lot of the same people at different powwows, you get to know each other over the years," said Ivan Julianto from the Red Hoop Singers, who participated in the hand-drum contest.

Based in Gardenville, Nev., the folk vocal and drum group's members represent various tribes, including the Washoe, Shoshone, Paiute, Navajo and Pueblo. Founded by the two brothers of lead singer Marty Montgomery, the group accumulated its additional members at various other powwow events, including gatherings in Sacramento and Milwaukee.

Julianto fashioned the group's main drum himself out of bull hide and a circular wooden frame, a process that took two weeks. The groups were judged not just for the individual drum performance but also by how well their performances complemented the different styles of dancing.

"The drum itself is the main tool in the whole group. We take care of it as one of our own. If the drum doesn't sound good, we don't either," said Nathan Pelly-Willy, a member of a Canadian group representing the Cree Confederation. Originally from Edmonton, Alberta, they attend up to 50 powwows a year across North America.

"Powwows bring people together," he said. "They're a celebration of friends and family. And they're also an opportunity for us to do what we love."