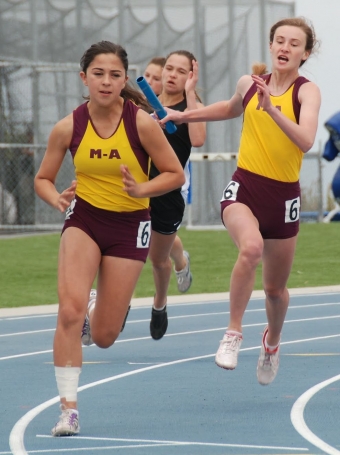 Menlo-Atherton freshman Naomi Tovar (left) awaits a handoff from Megan Kurtz on the final leg of the 400 relay that the Bears won during the PAL track and field championships on Wednesday at College of San Mateo. Photo by Forrest Carmichael.

Stas Della Morte is making the most of his track and field experience. Catherine Carpenter didn't know what to expect this season.

Each of them had a hand in helping Menlo-Atherton track and field win both the boys' and girls' team titles Wednesday at the Peninsula Athletic League finals at College of San Mateo.

Della Morte, who won the long jump last week and has the Central Coast Section's top mark in the event, also qualified in the 100, the high jump and as a member of the 400 relay team.

He plans to compete in all four events at the CCS trials, which is scheduled for Saturday, May 21, at Gilroy High.

This is his first season on the Bears' track and field team and he loves every minute of it.

"I love all the sports I do," said Della Morte, who was accepted to Oregon as a student before he even knew he would participate in M-A track and field.

"I'm into jumping," he said. "I am dunking a basketball at six feet and I did high jump and long jump in middle school. I was doing pretty good then so I thought I might do OK."

During the football season one of the track coaches saw him running and asked if he'd consider running track.

"I figured, why not?" he said. "I usually stopped playing after basketball season."

And to think he needed a push from his father, Tony, to start playing baseball at age 11. Before then he was content reading comic books and bicycling with his mother, Iryna.

"He just thought it would be a better environment for me," said DellaMorte, who has since decided to pursue track and field at Oregon as a walk-on.

Carpenter, who won both the 200 and 400, still has another year before committing to a college but it will be academics first.

"I would love to run track in college," she said. "I know that running at the Division I level is really time-consuming; maybe Division III."

Carpenter has been bothered by shin splints all season and after resting for a while, nothing changed. So she decided to run through the pain.

That's what makes winning two events at the league meet even more satisfying.

Freshman Taylor Fortman earned a trip to the section trials, finishing fifth in the 1,600 in a personal best 5:33.87.

In the boys 1,600, Michael Hester finished fourth and Jack Beckwith was fifth to qualify. DellaMorte was fourth in the 100 in 11.54.

Other qualifiers include Katelyn Doherty and Alyssa Sterns in the pole vault, Di'jonn Williams in the high jump, and Michael Hester in the 800.

you missed some kids...
other qualifiers for CCS include

The first few seconds after awakening; before I remember the virus
By Chandrama Anderson | 0 comments | 3,031 views

Can you stay healthy without making more trash?
By Sherry Listgarten | 4 comments | 2,426 views

Think about helping others in our coronavirus-affected area
By Diana Diamond | 5 comments | 2,240 views