Father and daughter share a love of community involvement 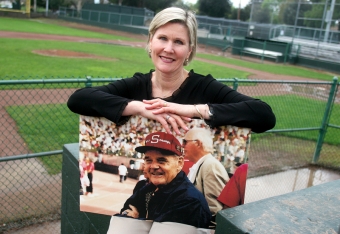 It's been a memorable few months for the Alhouse family.

In February Jane Gee and her father, William Alhouse, were named this year's Tall Tree Award honorees in the outstanding-citizen category, the first time an award has been shared between a father and daughter. The month took a sad turn when, having suffered from Alzheimer's disease for the past three years, Alhouse died Feb. 24. The following week, Gee helped present another Mothers Symposium, a community event she co-founded more than a decade ago.

Next Thursday, March 31, with her family around her, Gee will be honored at the Tall Tree Awards ceremony.

"It's one of Palo Alto's highest honors," Gee said of the award. And sharing it with her beloved father, with whom she also shared a love of volunteerism and sports and a successful career in real estate, makes it all the more special, albeit bittersweet.

"I was so proud of my dad and vice versa. I'm glad he made it to the reception," she said, referring to the Feb. 10 event. "He was so happy."

Happiness, inspiration and a desire to help others are some of the words that come to mind when Gee remembers her father. "Baseball and business" are the others, she said, laughing.

A native of Brooklyn, William "Billy" Alhouse moved out west for college, got a master's degree in education from Stanford and worked as an assistant baseball coach there for 17 years. He helped to create the Palo Alto Little League, for which he also coached, in 1951.

"My mother married him thinking she would be the wife of a baseball coach," Gee said.

But when the sleepy town of Palo Alto started to grow in the 1950s, Alhouse opened a real-estate office while continuing to coach and raise two daughters. He made his presence known in the Palo Alto business community for years as the head of Alhouse Realty, serving on the Palo Alto Board of Realtors and as its president in 1963.

He never left baseball far behind, taking his family to Amsterdam for a year to coach the national team there and later serving as a coach at Gunn High School and Menlo School. "The contribution that Bill has made to young people in this area transcends sports. He has been a mentor and role model for integrity and fair dealing in business and in giving back to the community," wrote award-nominator John King, who took over Alhouse Realty in 1985.

"He wanted to help people his whole life. I have done some things but not nearly as much as him," Gee said.

Despite her modesty, co-honoree Gee has carved her own niche in Palo Alto, first by following in her father's footsteps, then branching out.

"Jane continues her father's legacy of a volunteer who jumps into many causes. Through PTA; neighborhood leadership; church mission trips to Mexico to build homes; wildlife protection and service to Preschool Family and Family Resources boards, she is a ceaseless volunteer," former Tall Tree honoree Megan Swezey Fogarty wrote in her nomination letter.

Gee grew up in Palo Alto, attended the University of the Pacific in Stockton, then, like her father, worked in the Stanford Athletics Department. After a year spent teaching in Marin County, Gee was ready to come home and make a career change.

"Dad said, 'Get your real-estate license and come work for me,'" she said, so she did just that, working for Alhouse Realty for 12 years.

"It was so much fun to work with him. I never felt like I had to follow in his footsteps, but I loved that work," she said. She served as president of the Palo Alto Board of Realtors in 1993, exactly 30 years after Alhouse did.

After meeting husband Bruce (whom she calls a perfect match, "made in heaven") and having two kids, "It all changed. I had a hard time deciding whether or not to go back to work. I was really torn because I loved the business, but I certainly loved my kids more."

Realizing such issues are common among modern mothers, Gee created a forum for women, a place of discussion and support. In 1997, the Mothers Symposium was born.

Every other year, several hundred women gather at Stanford to hear guest speakers, music and more.

"The camaraderie of women is very powerful and comforting. It tells women they're not alone," she said.

Though she keeps her real-estate license current, Gee said she's busy with her volunteer work, raising her now-teenage kids and helping her elderly in-laws and mother, all of whom live locally.

The Alhouse family's legacy of support for local sports lives on through her children and through the Palo Alto Little League organization, which continues going strong after 60 years.

"We still sponsor a team," she said. "We always will."

These local restaurants are donating meals to Bay Area residents in need. Here's how to help.
By Elena Kadvany | 6 comments | 10,912 views

Coronavirus: Plan ahead now for a big outbreak
By Diana Diamond | 18 comments | 3,966 views

Will the Coronavirus Save Lives?
By Sherry Listgarten | 29 comments | 3,763 views