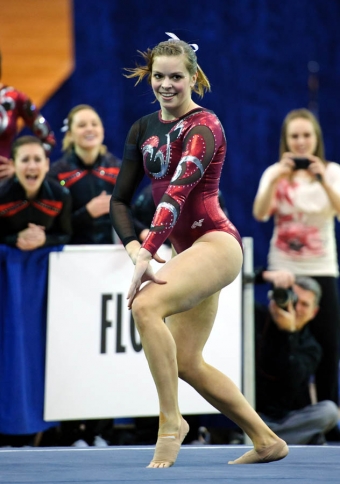 Seniors Shelley Alexander and Danielle Ikoma led a group of five Stanford athletes named to the All-Pac-10 Conference women's gymnastics team, as announced by the conference office on Wednesday.

The honor was the first for Ikoma, who earned the recognition for her performance in the all-around during her first season attempting the discipline.

She was among four Cardinal to be named to the first team. The others are Alexander (all-around), junior Alyssa Brown (balance beam), and sophomore Ashley Morgan (floor exercise).

Ikoma scored 39 points or more four times, including in her final home meet when she scored a personal best 39.275 against Arizona State to earn her first all-around victory.

Alexander earned her third first-team conference honor and first in the all-around. She won all-conference honors on vault and floor in 2009. Alexander scored a season-best 39.400 in a tri-meet against Michigan and Nebraka, and won three all-around competitions during the season.

Morgan has been Stanford's breakout star this season, tying for the Pac-10 title on floor to extend her winning streak in the event to nine consecutive meets. Morgan has the nation's highest season average on floor, at 9.915, which is the highest for any Pac-10 competitor in any event. This is Morgan's second all-conference honor and first time on first team.

Pechanec's average score on floor is 9.825, which is fourth-highest in the Pac-10.

Stanford's nonconference match at Pepperdine was suspended because of rain on Wednesday.

All six Cardinal singles players won their first set, with Veronica Li leading 6-0, 4-0 when the match was halted for the day.

The match is scheduled to continue Thursday.

Stanford hosts the Stanford Invitational this weekend at Cobb Track and Angell Field. The annual meet will be all day Friday and Saturday and feature some of the top high school and collegiate talent from around the nation.

The Stanford Invitational begins at 9 a.m. on Friday with the field events. Running events begin at 11 a.m. with the fourth section of the men's 5,000 meters.

Penn State moved into second place with 528.25 points while Florida State is third with 505.50.

The next Division I standings will be released April 7.

Coronavirus: Plan ahead now for a big outbreak
By Diana Diamond | 22 comments | 4,631 views

The first few seconds after awakening; before I remember the virus
By Chandrama Anderson | 0 comments | 1,812 views

Can you Stay Healthy without Making More Trash?
By Sherry Listgarten | 2 comments | 1,161 views