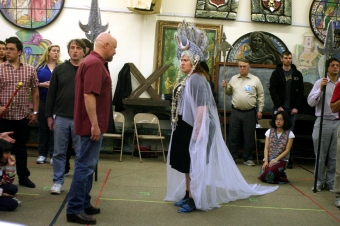 This is the first time West Bay has presented "Turandot" in its 55 seasons. As with the other two operas in the season, "Turandot" is a company premiere.

Now in his fifth year as the head of the Palo Alto-based company, Moscovich has a significant challenge as conductor of the rich, diverse score. In composing, Puccini threw off the romantic and gritty verismo tradition of his earlier successes. Instead, he ventured into an exploration of writing that has elements of atonality, Chinese pentatonic themes, echoes of Wagner and Stravinsky, and even jazz riffs of the early 1920s, when the opera was written.

Puccini died after composing all but the final scene, and the Italian conductor Arturo Toscanini had it completed by composer Franco Alfano from sketches left by Puccini.

"Turandot" is rarely staged, perhaps because it usually aspires to be the grandest of grand opera requiring unlimited budgets. The West Bay interpretation is expected to rely more on nuance, subtlety and the opera's innate fated triangle of an icy repressed Princess Turandot; Liu, a tragic slave girl who cares for the dying deposed king Timur; and Prince Calaf, the heroic but insensitive son of Timur.

Almost equally important musically and dramatically is a trio of comedians in the old commedia dell'arte tradition: Ping, Pang and Pong, ministers to Turandot's father, the Emperor Altoum.

Puccini took the story of "Turandot" from a tale by 1700s storyteller Carlo Gozzi. Driven by a hatred of men, Turandot will consent to marry only a man who can answer three riddles. Many overconfident suitors literally lose their heads before Calaf's arrival. He successfully answers all three, but generously allows her to be free of her pledge by guessing his name. A nationwide search ensues while no one sleeps," the famous "Nessun dorma" tenor aria sung by Calaf. Turandot finally discovers she is transformed by the hero, and admits she has succumbed to the power of love.

The title role requires a barn-burner of a soprano with Wagnerian power. In this production, the princess is played by Alexandra LoBianco, whose performance of the "Turandot" aria "In questa reggia" helped her win the 2011 Liederkranz Foundation Vocal Competition in New York.

Calaf will be sung by tenor David Gustafson, with Liu sung by lyric soprano Liisa Davila. Bass Adam Paul Lau, winner of the 2010 Henry and Maria Holt Scholarship Award, plays the dying Timur, the moral center of the opera.

David Cox, a veteran director and singer, is directing. The Chinese fantasy set is designed by Peter Crompton. Lighting is by Rob Anderson and the sound design is by Tod Nixon.

The orchestra will be supplemented with special doublings and unusual instruments such as Chinese gongs, glockenspiel and bass xylophone that will occupy space under the stage.

Can you stay healthy without making more trash?
By Sherry Listgarten | 4 comments | 2,510 views

Think about helping others in our coronavirus-affected area
By Diana Diamond | 5 comments | 2,327 views