He replaces Harbaugh as the school's 34th head football coach 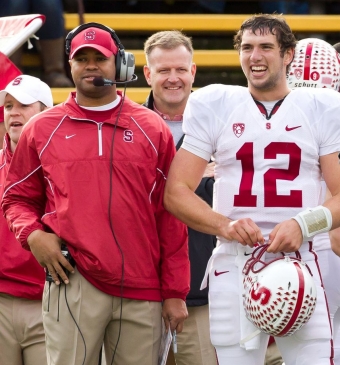 Stanford offensive coordinator David Shaw (left) will return to coach quarterback Andrew Luck next season, only this time as the Cardinal's new head coach. Shaw was named to the position today. Photo by Bob Drebin/Stanfordphoto.com.

This is breaking news that merits being sent urgently to subscribers??

The fact that the news of Jim Harbaugh signing with the 49ers last week made the front page of every paper in the Bay Area and was national news, it seems an obvious choice to make his successor "breaking news." If you don't agree, don't read it. There are plenty of people who wanted to know who would be replacing Harbaugh.

This is great news! Coach Shaw is the perfect choice to lead the team. There are a lot of fans out there, myself included, who think that this warrants an e-mail notice.

AD Bowlsby has come through again by selecting the right person at the right time. Congratulations to Mr. Shaw on being the new head coach of the Stanford football program. Mr. Shaw - yes - with great focus and zeal, your experience, knowledge, communications skills, leadership, creativity, and the support of the Stanford community - you can create your own legend like Tara and Dick. Congratulations!

Flying: How to lower your impact
By Sherry Listgarten | 6 comments | 1,755 views