Don't be surprised if Harbaugh stays at Stanford 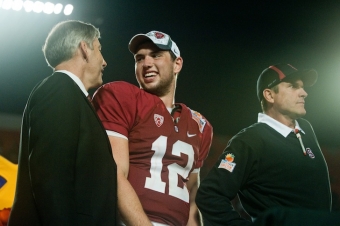 Stanford Athletic Director Bob Bowlsby (left) has quarterback Andrew Luck (12) returning for next season and, according to reports, may have head coach Jim Harbaugh (right) also back, as well. Photo by Don Feria/Stanfordphoto.com.

Come on Jim. Don't be a Palin and quit when your team needs you. Andrew Luck has manned up. Now it is your turn.

Guess you were wrong... 5-year deal with 49ers just announced.

Flying: How to lower your impact
By Sherry Listgarten | 7 comments | 1,844 views