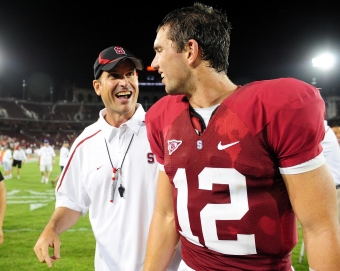 Stanford coach Jim Harbaugh was tabbed the nation's top coach for 2010. He helped develop Andrew Luck (12) into one of the top quarterbacks in the college game.

congrats Coach! I must admit I was only able to attend one game at Stanford this year but followed team both on TV and in the news. Exciting stuff but even more rewarding is watching how composed you've been over the past several years, as your rebuilt the team, the culture, and the results. Great job from just a local yocal.

Kudos to Peters for well-written story as well.

STRANGE!! Not ONE of the San Francisco TV stations or San Jose tonight, Wednesday, mentioned anything about this. Not channels 4,5,7, and 11. I missed
Channel 2 earlier. Congratulations, Coach. We want you to Stay here. California weather beats Michigan. Have you checked Ann Arbor lately? Easier here for your kids to get to school, and there are terrific schools around here. No snow shoes. No 'snow days'. no tornadoes (well, we had two in about sixty years.) And golf all year round. As for game attendance, reach out once again to the area families, employees, retirees, Facebookers, Googlers, and all the rest - area employees who actually live around here. Going to the games with children used to be a big thing years ago....until the ticket prices got out of hand. AND PULEEZE, no 8:00p.m. games.

"just a local yocal"? It's not that much of an eyebrow-raiser; we are not a rural farming community. Many Paly graduates are successful. And Harbaugh probably will not stay just to appease Palo Altans. He has a career and he's not finished yet. Jim won "Most Athletic" of our Class of '82. He played baseball and basketball too. Amazing that with all his exposure to sun, he looks great for his age. Jim, please attend our reunion. Missed you in 2002.

HOPE YOU FOLKS IN PALO ALTO ENJOYED "coach" CAUSE HE'S DONE A GREAT JOB!!!!!!!!!!!! BUT KNOW HE'S GOT A JOB TO DO IN ANN ARBOR!!!!!!!! THE WOLVERINES NEED "COACH" TO HELP RETURN THE WINNINGEST COLLEGE FOOTBALL PROGRAM BACK TO PROMINANCE!!!!!!!

Wishful thinking therobb777, but don't expect Harbaugh to make a lateral move like that. If Harbaugh isn't with Stanford next season, he'll be coaching in the NFL -- quite possibly with our very own San Francisco 49ers.

Bruce, thats a Great point!!!!!!!!! I Actually can see that happening but I Would Not call moving from Stanford to Michigan a "lateral move" my friend!!

you are correct therobb777--stanford to michigan would not be a lateral move--it would be a downward move. Michigan is overrated--one "championship" in the last 62 years, 2-5 in last 7 bowl games. The Big 10 is overrated as well and as for Bo Schembechler--no national championships--overrated coach. Loser program, loser conference.

So why wouldn't he go to NFL and get some real money ...?

As a ND fan, would hate to see him head to Michigan. That said, great coach that will prob. end up in the NFL (fingers crossed). Many say he is better than his bro coaching the Ravens... If that is true, cheers to the start of a great coaching career!

Flying: How to lower your impact
By Sherry Listgarten | 6 comments | 1,744 views