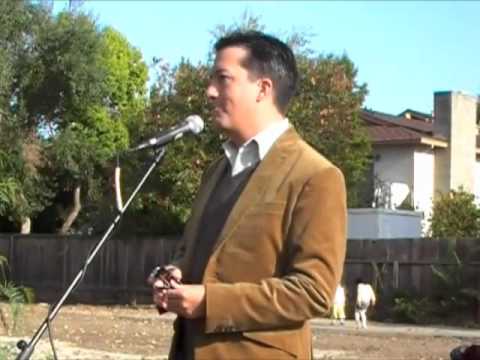 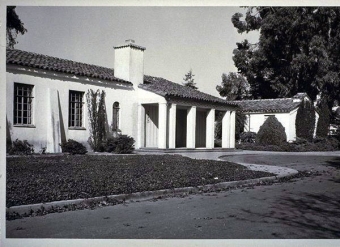 The College Terrace Library in 1956. Photo courtesy of the Palo Alto Historical Association.

With the snip of a ribbon, Palo Alto Vice Mayor Sid Espinosa welcomed a crowd of about 100 adults and children to view the newly renovated facility, located on Wellesley Street in the College Terrace neighborhood.

"Libraries these days are not just places to check out books. ... They're places for neighbors to get to know each other," Espinosa said. "In our crazy lives, when we're online and we're not meeting as many people as we sometime used to in public forums, libraries still serve as that gathering place."

The re-opening of the library, built in 1936, was almost delayed until next summer due to proposed budget cuts. But after residents spoke to the City Council Finance Committee in May, it recommended to forgo the $74,000 in savings and open the library branch on schedule.

The remodeling job included seismic upgrades; new electrical, heating, air conditioning and lighting systems; a new roof; and changes to comply with the Americans with Disabilities Act (ADA). The interior has remained much the same, except for wider aisles and some new access points for ADA compliance.

The adjacent Mayfield Park was also re-landscaped as part of the project.

We in College Terrace are delighted the library has reopened!
Many thanks to all who made this possible.
Thanks too to neighbor, Nancy Cassidy for singing at the opening!

It's a shame all that money was wasted on a small, poorly utilized, branch library. The world is quickly moving beyond the big-box-of-books approach to information distribution. Books/magazines and information now come from the air, as Verizon and AT&T Wireless both began selling iPads in stores at the end of October:

Unfortunately, Palo Alto, California, hasn't understood the work of the Silicon Valley. Millions, and millions of dollars are going to be wasted in this library system in the coming years.

Bah Humbug, Walter. Not everyone shares your views or has your wealth. Libraries are for everyone.

what a silly waste of money.

It was great to see College Terrace re-opened after all these years. All throughout the 70's, my brother and I would bike to College Terrace library for story time (thank you Mrs. Yowell), reading programs, and just on our own to read books that we couldn't afford to buy. It was a great way to "explore" the world by reading about far away places that we hadn't visited.....and read, simply read. Sad to see how some think it's a waste of money. Not everyone to this day can afford a computer with wi-fi.

The first few seconds after awakening; before I remember the virus
By Chandrama Anderson | 0 comments | 3,137 views

Can you stay healthy without making more trash?
By Sherry Listgarten | 4 comments | 2,521 views

Think about helping others in our coronavirus-affected area
By Diana Diamond | 5 comments | 2,340 views