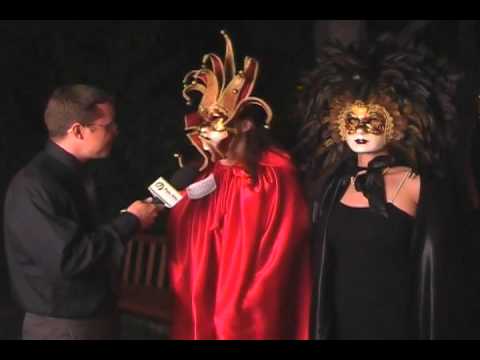 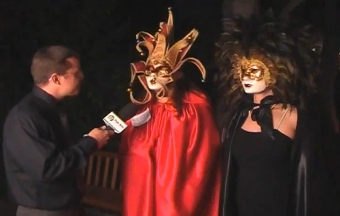 The biennial dinner-dance and community fundraiser, spearheaded by the Palo Alto Recreation Foundation, filled the hallways and patios of the Lucie Stern Community Center with party-goers, some dressed in sparkling ball gowns and well-pressed tuxedos.

The theme for 2010 was "Masked Ball," and attendees responded -- with masks adorned with feathers, sequins and jewels of all colors.

One highlight of the evening was the appearance of Foreverland, a 14-piece Michael Jackson tribute band, who performed classic hits from the King of Pop in one of three venues at the Ball. On a temporary dance floor laid out under the clear nighttime sky, more than a hundred revelers crowded in to groove, shimmy and show off their best "soulful robot" moves to "Beat It," "Billie Jean" and "Thriller."

The silent auction attracted numerous bidders on items such as lunches with officials, a Stanford shopping spree and retail gift packages. A homecooked Persian dinner for six donated by Community Services Recreation Services Manager Khashayar "Cash" Alaee was valued at $300 but had already attracted more than $500 with at least a half-hour to go until bidding closed.

Ball committee member Wynn Hausser called the event "a smashing success" and noted that it was produced largely by volunteers who invest hundreds of hours into the planning. "We were very pleased."

"More than anything, the feel and atmosphere -- each room and location had a different flavor. There was something for everybody," Hausser said.

"People who come are sold for the future. Our biggest challenge is getting people in the door," he said.

Ball co-chair Pat Emslie said the decorations -- which included giant masks -- reflected the theme by representing cultures and areas of the world that traditionally hold masquerades, including New Orleans, Brazil and Venice.

The event is a city tradition since 1987, when the Palo Alto Recreation Foundation was formed and the first Black & White Ball held as a means to save the city's historic May Fete children's parade (then endangered due to budget cuts). The ball was a hit, and this year nearly 1,500 people attended, according to Hausser.

The Palo Alto Weekly/Palo Alto Online was the media sponsor of the event.

Were you at the Ball? Submit your photos to the Palo Alto Online photo gallery!

The first few seconds after awakening; before I remember the virus
By Chandrama Anderson | 0 comments | 3,125 views

Think about helping others in our coronavirus-affected area
By Diana Diamond | 5 comments | 2,329 views