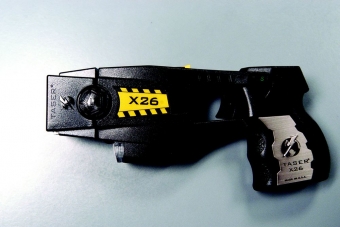 Recent incidents in which Palo Alto police officers fired their Tasers at suspects would have violated the city's new policy for deployment of the controversial stun guns. Palo Alto Online file photo.

we have come to the conclusion that police are given too much authority. they are never to be trusted for any reason forever.

Cops who use their weapons in violation of department policy should be fired and arrested for assault and battery (or worse).

The second and third use of the taser were within the policy that was in affect at the time of use. It doesn't matter that they would have been in violation within the new policy. IT WASN'T IN AFFECT AT THE TIME!!! This is similar to the data collection cards. You can report on the numbers which ever way you want to use them. Bravo to Chief Burns for not accepting the first incident. It shows that he is doing the right thing.

So if they come out with a more restrictive policy in a few years, will they review all the current taser issues and tell us if they were out of compliant with the complaints that are to come? How ridiculous. Why are they spending so much time on whether things are acceptable under policy and practices that were not in place during the time of the actual incident? POST DE FACTO GINACO!

I think reviewing past incidents to test them against a new policy makes a lot of sense.

So, there were some past incidents which were within past guidelines but not under the new ones. Of course! Otherwise why bother changing the policy if it makes no difference in practice?

A story from a couple of big nightclub bouncers makes me hesitant to be a knee jerk PC type on the subject of Tasers. These bouncers said that when young men, hopped up on steroids, come out of their clubs looking for a fight, it can take more than a couple of big, bad dudes to subdue them. While many of our Palo Alto Police officers are big bad dudes, it is doubtful that any individual could stop an out of control druggie. An officer has a right to defend themselves from assault. The choices are martial arts, club, Taser, or bullets. The Taser seems like the tool to inflict the least damage under those kind of circumstances.

only problem, they act like ''big bad dudes''all the time when stopping non whites who are non confrontational. they think all non whites are ready to explode all the time. that is an erroneous assumption! very dangerous attitude of police.

Good grief! Let the police do what they need to!!! They have had a lot of training.


Let's go back to the good old days where the Cop either bashes you in the head with a loaded billy or shoots you. Hey, it was good enough for Grandpa.
Or, we could teach our kids not to challenge the police. Nah, that might suppress their self esteem.

There are two basic problems with tasers, and one arises from the other.

The root problem is that, for many years, Taser International mounted a campaign to convince everyone that tasers were essentially perfectly safe; that they could never be a cause of death - and these claims were false. Some of the propaganda techniques used to convey this false impression amount to deceptive marketing (perhaps much worse). The naive law enforcement community was played like a dime-store trumpet.

They've been forced by the growing liability risk to issue new warnings (May 1, 2010) that finally include an admission that (for example) tasers can cause risk-of-death heart effects if a dart happens to land on the wrong spot on the chest. That certainly explains some of the many deaths... They also admit that tasers, when used repeatedly or for long durations, can cause lethal acidosis. That would certainly explain some of the other many deaths...

By the way, their latest warnings end the debate about taser safety. They and their fan-boys were wrong, and the critics were correct.

The secondary problem arises from the first. Police, having been misled that tasers are safe feel free to use them on anyone, even those that do not represent an actual threat. Back-talking speeder? Zap. Kid asking annoying questions? Zap. Minority suspect failing to display sufficient respect (hey, it's true)? Zap.

The cross product of the first problem with the second is that people are being killed by the police that did not do anything that deserved a potentially-lethal response. The police themselves probably are as shocked as anyone when someone dies immediately after being tasered.

The initial solution is to restrict tasers to situations where the subject is already displaying immediate violence to the police. Hopefully the police can distinguish ACTUAL threats from simple frustration that may also result in what appears to be "an aggressive stance". If they would spend some time practicing their de-escalation techniques, everyone would be safer.

Long term, someone needs to seriously investigate how Taser International is getting away with being involved with hundreds of deaths, influencing the medical examiners with their vastly overused "excited delirium" excuse for taser-linked deaths, and how they get away with acts and omissions that are clearly deceptive and misleading.

This is a very complex issue and there is a great deal of sleight-of-hand going on by some of the pro-taser folks. My blog has 2000 posts on the subject, all linked to sources so you can fact-check until your eyes bleed. Some of our findings include some amazing examples of corporate or personal misbehavior.


Some folk obviously don't get satire. Imperfect as the Taser might be, it is undeniably safer than a pistol or a billy. Safest of all is to submit peacefully to arrest and work it out in court. I do recognize that for society to work there must be an overwhelming bias toward voluntary compliance with the laws. I will not send police out but deny them the means of controlling resisters. [Portion removed by Palo Alto Online staff.]

Portland's Thai food darling Pok Pok will be popping up on the Peninsula this spring
By Elena Kadvany | 2 comments | 3,841 views

Flying: How to lower your impact
By Sherry Listgarten | 19 comments | 3,075 views