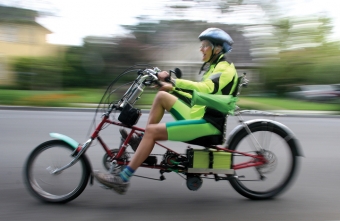 
I would like to see lights and to see the pennant on Oliver's bike a bit higher and dayglo orange for increased visibility.
Betcha when Big Sister was walking her little brother across the street she never thought she'd be escorting him across the country. Do they have a blog to follow their progress?

Like this comment
Posted by Chris Kenrick, Palo Alto Weekly staff
a resident of Old Palo Alto
on Apr 22, 2010 at 12:32 pm

Have a good time. Enjoy the journey.

You're on your way! Wish I could be cycling with you, will be following you via your blog all the way from SE. Hope you get that lunch with President Obama - the more press coverage, the better! Good luck!

Portland's Thai food darling Pok Pok will be popping up on the Peninsula this spring
By Elena Kadvany | 2 comments | 3,648 views

Flying: How to lower your impact
By Sherry Listgarten | 18 comments | 2,954 views