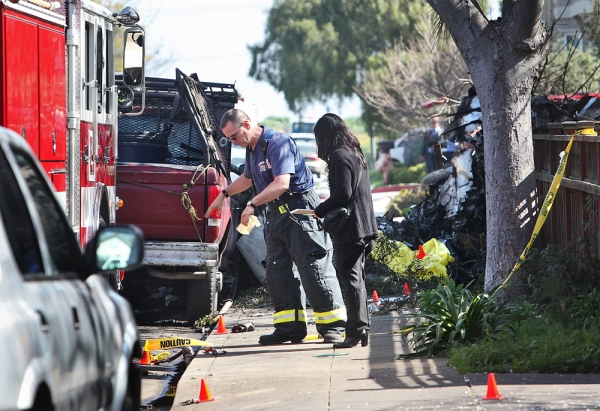 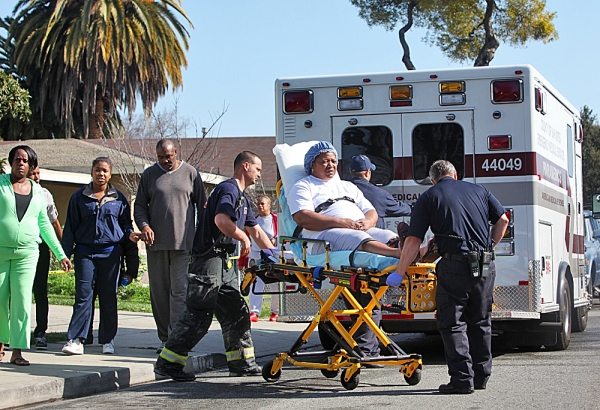 Lisa Jones, owner of the day-care center hit in the crash, is transported to the hospital for high blood pressure. Photo by Michelle Le/Palo Alto Online. 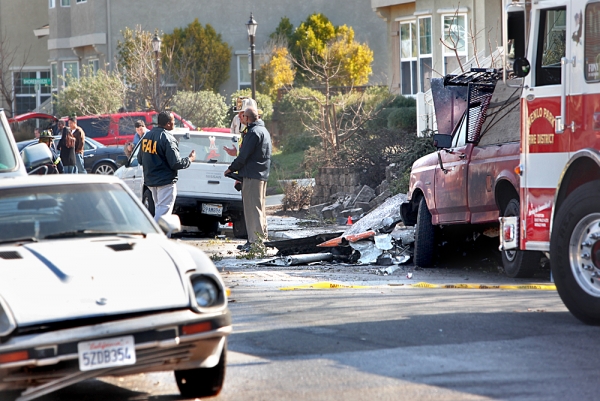 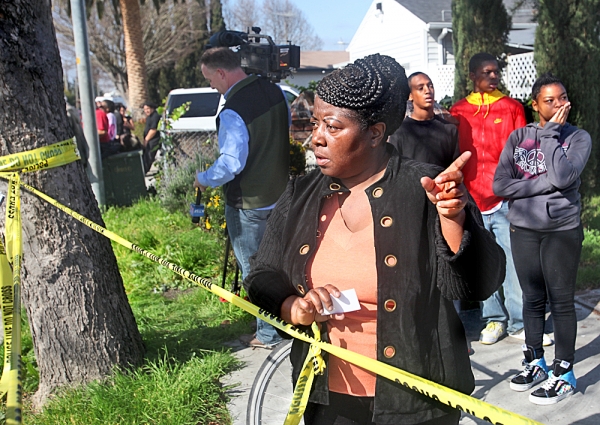 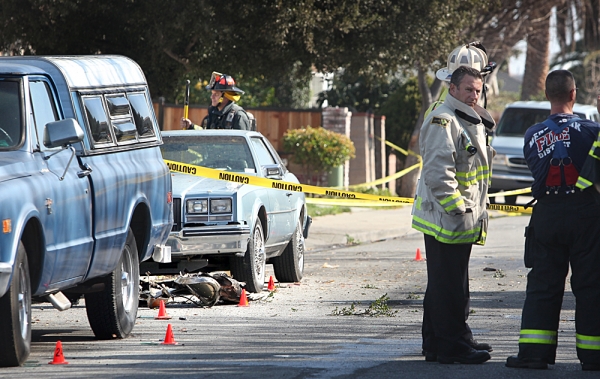 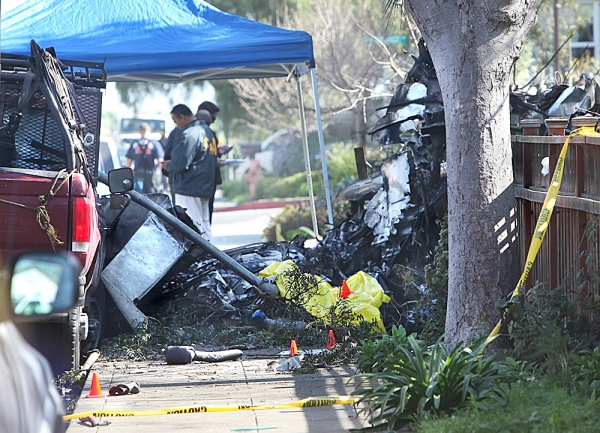 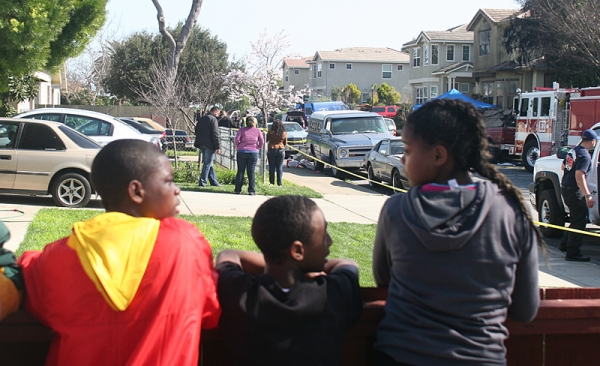 (L-R) Jamar Gaddis, 15, Daron Meacham, 15, and Gracie Gaddis, 12, watch police and fire officials work on the site of the plane crash on Beech Street in East Palo Alto Wednesday morning. The three were getting ready for school and heard the crash. Photo by Veronica Weber/Palo Alto Online. 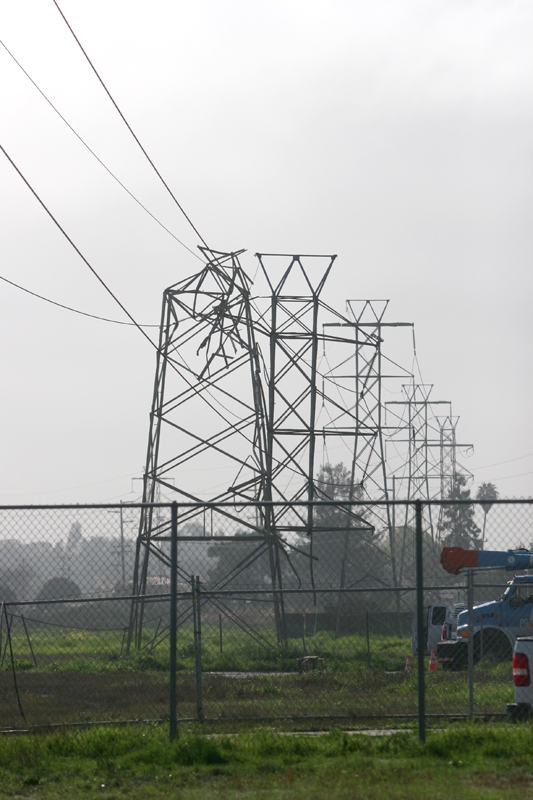 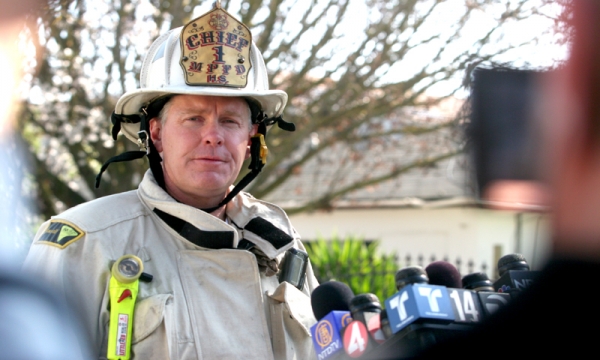 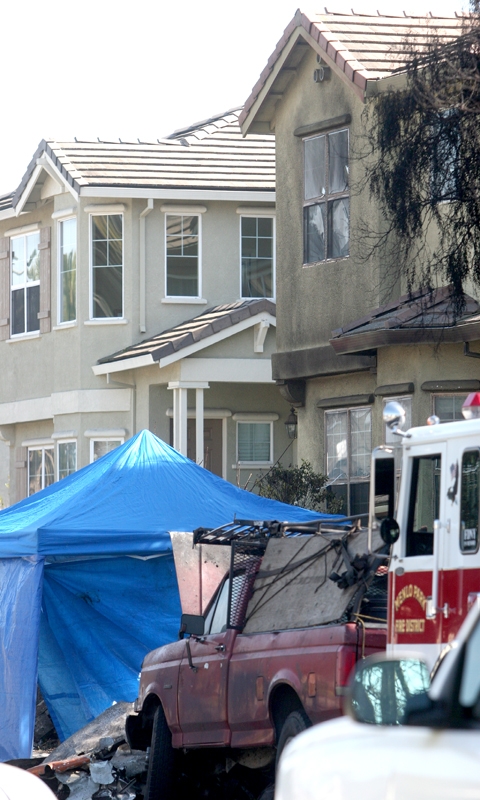 Smoke and fire damage is shown on the exterior of this house on Beech Street in East Palo Alto after a plane crashed and triggered fires Wednesday. Photo by Veronica Weber/Palo Alto Online. 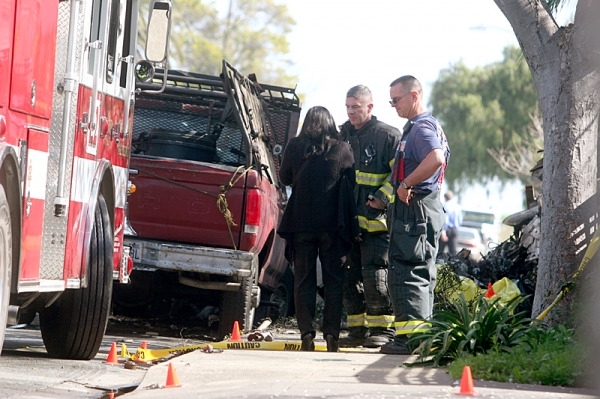 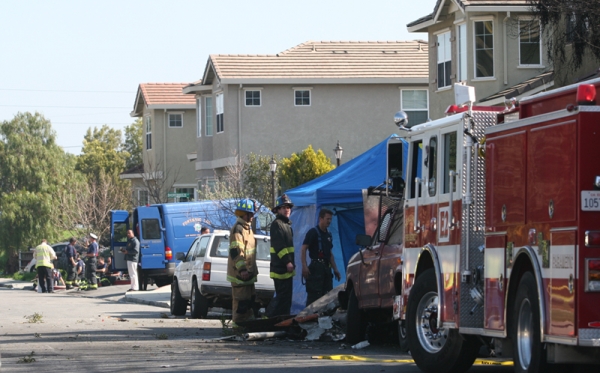 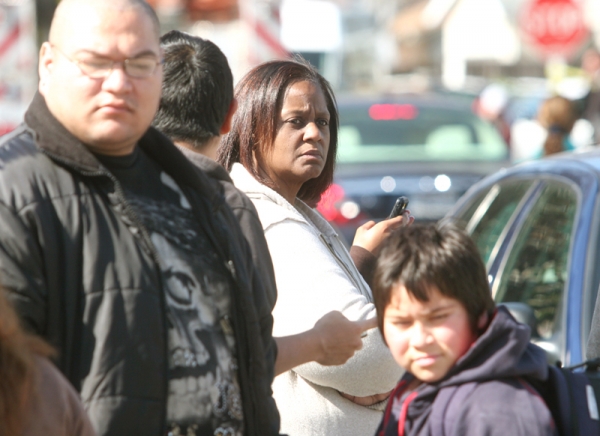 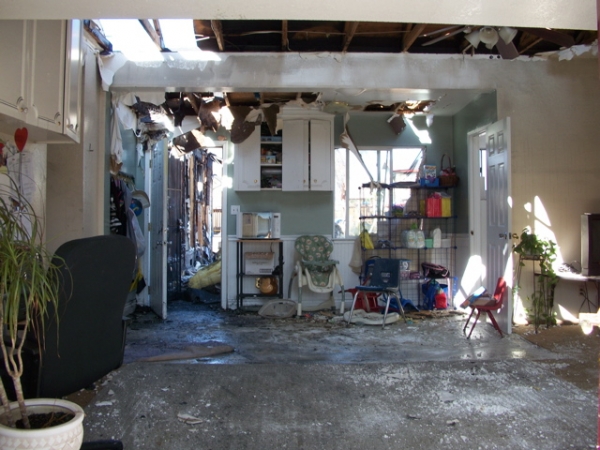 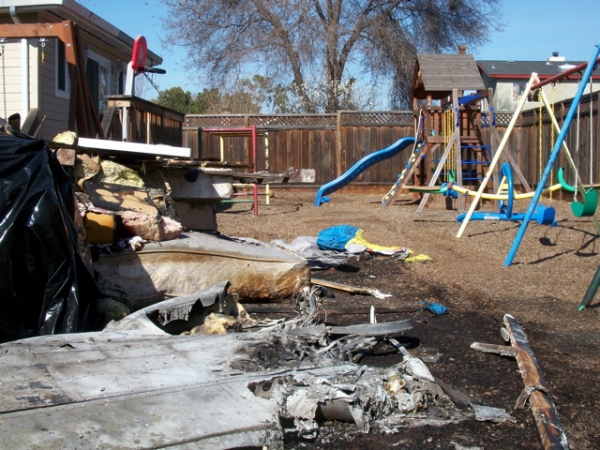 Parts from the crashed plane sit in the back yard of a day care in East Palo Alto. Photo by Sue Dremann/Palo Alto Online. 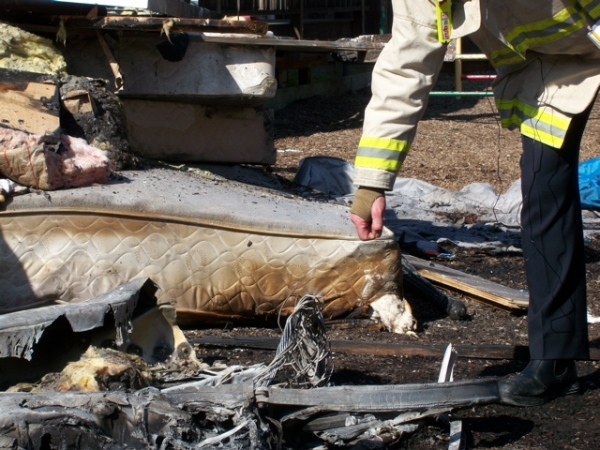 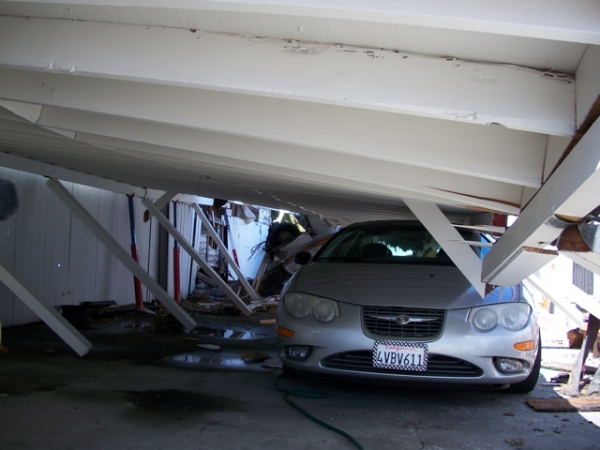 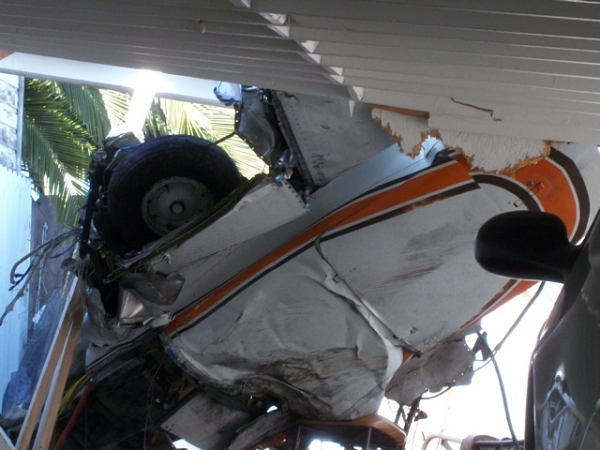 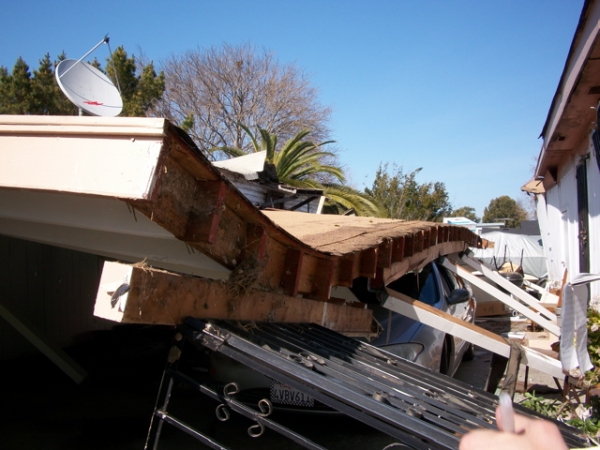 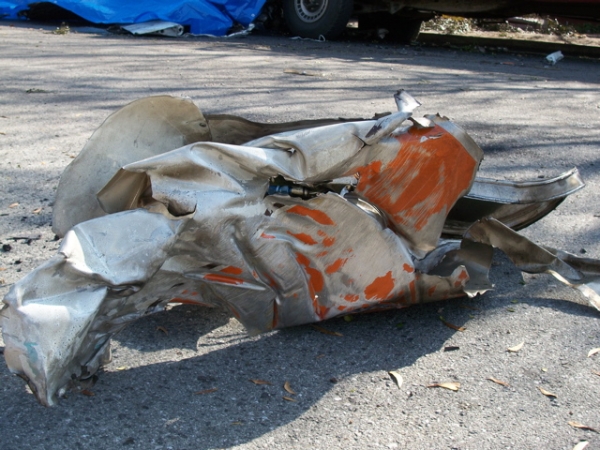 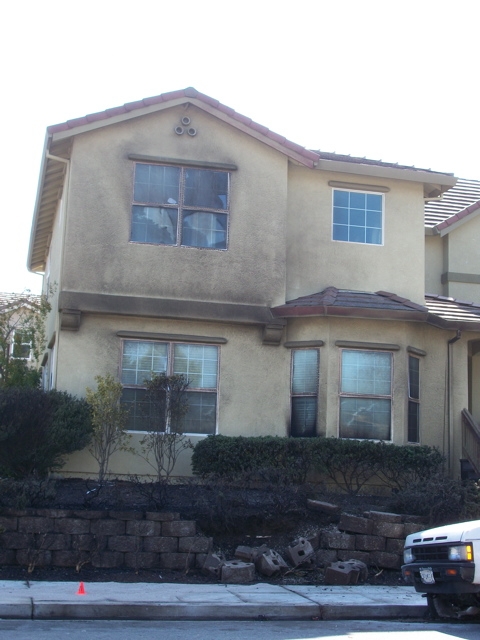 Get more details about the crash on twitter.com/paloaltoweekly.

Get more details about the crash on twitter.com/paloaltoweekly.

I'm wondering who is responsible for the costs of this accident?

Also, using the "sharpspotter" is that to get evidence and information,
or is there a suspicion that the plane was shot at or shot down?

Thanks again to P.G.&E. and City Of Palo Power for getting the power
back up! It is really great to have power again.

Anon - the micorophones placed around the city are used to record gunfire which activates ShotSpotter. No one has mentioned suspicions of the plane being shot down. However, reports say the crash and explosion were recorded by the system, which can aid in determing what happened. Here is the site: Web Link

There is no need to conduct an investigation. if you read the other threads on this forum, you will see that Sharon and Narnia have assigned blame for the crash solely on the pilot. End of story

A more likely scenario would be that the pilot lost power to the right engine due to a mechanical problem. This would cause the plane to veer to the left and would have been the reason why the plane was so low.

The fog would have exacerbated the problem and the pilot would probably be unable to make a suitable recovery.

This is all speculation though. That's why our taxes pay for the NTSB to investigate these types of accidents.

Real Sharon, please ... Nobody assigned the "blame" to anybody.

What is a fact is that the loss of visual cues when flying in bad weather, is a common factor in airplane crashes. If the pilot had enough visibility he would have seen where he was going, whether the plane was high enough and could act accordingly. That's why taking off in such weather seems a little reckless, independently of the cause of this disaster. We can all make mistakes, specially cognitive mistakes, which shouldn't mean at all that we are bad people or should be held criminally responsible. I do not understand why it is so very hard for people to think of pilot error or excess of self confidence...In fact, those are the major causes of plane crashes,
not mechanical failure or structural fatigue (though those also happen now and then, of course).
Human error remains the single major cause of airplane disasters.

PatrickD, one reason for turning as he did could have been caused by momentary distraction and disorientation due to poor visibility. If he thought he was taking off towards the south, his turning left as he did would have taken him to the bay away from built up areas as he would have wanted to.

Interviewed pilots said they wouldn't have flown in those conditions. It's too easy to get disoriented.

It would be good to have you all back to discuss the NSTB findings once they issue their report.

When a pair of 747's collided in the deadliest air disaster ever, the very respected veteran KLM captain in charge of all KLM pilot training, gave the order to take off and because of the heavy fog he only saw the PAN AM plane when it was too late. Though the major cause of the accident was the the premature take off order, not the fog, Captain Van Zanten didn't have visual verification that the Pan Am flight had taken off, due to the heavy fog.. And that spelled disaster.

Narnia, don't get me wrong, I definitely think the fog was a contributing factor to the accident. I just believe that it's unlikely that a pilot with his skill level would have become disoriented in normal flight conditions. We'll see when the NTSB issues its report, as they should be able to assess whether there was a mechanical issue.

BTW, I should have said "left" engine before and not the right engine. There would be a tendency for the aircraft to rotate around its vertical axis if there was asymmetric thrust.

Well, if the pilot made a mistake programming the
flight (not at all impossible even for a very experienced pilot)it is quite possible that he accidentally took off in the wrong direction. If he accidentally entered a different number than he meant and either in a hurry or a because a parallax error, for example.
We don't know but we know that by flying into heavy fog he gave no margin for error to his flight.
I am sorry for everyone affect by this including the pilot. If indeed this tragedy was due to human error-his- it doesn't diminish his accomplishments, his reported good nature, his intelligence, his experience and all his reported excellent qualities.It would just assert that he was a human being whose accidental mistakes led to tragedy.Not unheard of.

Narnia
"Real Sharon, please ... Nobody assigned the "blame" to anybody."

Well you did on this thread and had your comments removed:

While your comments were removed my response to you was left in:


"Posted by The Real Sharon, a resident of the Midtown neighborhood, on Feb 18, 2010 at 2:17 pm
I am glad to see that Narnia has conducted an investigation and uncovered all the facts regarding the crash.
I guess the Feds are wasting their time:
Web Link
It looks like Narnia has worked quickly--he/she has determined that there were no mechanical problems with the plane, what exactly the weather was at time of takeoff. She has also interviewed the people who's home was destroyed and figured out how much they have lost.
[Portion removed by Palo Alto Online staff.]
So it looks like the conclusion is that it was all the pilot's fault.
End of story"


Sorry, Narnia, you were assigning blame