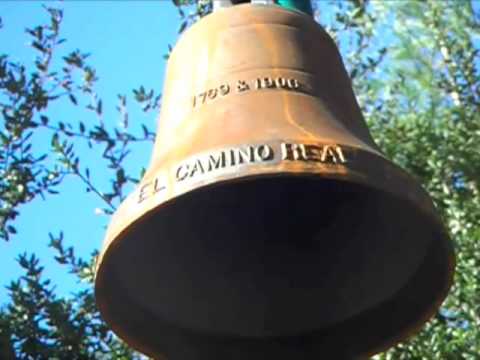 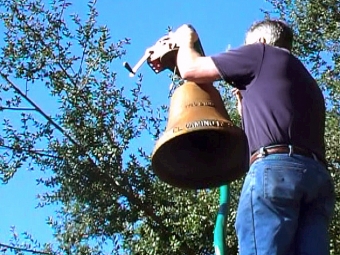 Bellmaker John Kolstad put the finishing touches Wednesday on a new "El Camino Real bell" that will be officially dedicated in Palo Alto this weekend to mark the site of the historic El Palo Alto, the city's namesake tree.

Kolstad for the past decade has made about 1,500 such bells, including those along El Camino Real in Palo Alto. If the bell looks rusty it's one of his, he told the Weekly.

The bell installation is being sponsored by the Pacifica chapter of Beta Sigma Phi, a women's service group and "friendship sorority," to commemorate the site of the historic tree, which is believed to have guided Spanish explorers back to their camp in the late 1700s.

Kolstad said he is an unlikely inheritor of the 1906 California Bell Company firm that made the El Camino bells famous. For years, the bells were placed at state historical landmarks, predating the bronze plaques that supplanted them, he said. One bell is even in Lone Pine along Highway 395, far from El Camino Real.

The original firm was owned by Mrs. A.S.C. Forbes, who made bells until the late 1930s when bellmaking was suspended due to the need for iron in World War II. She then sold the firm to two women who worked at Macy's, who made smaller, souvenir-type bells, Kolstad said. Joe Rice bought the firm in 1952, but it went inactive in 1960 because he had to focus on a second business.

"He locked everything in his garage and it just stayed there," Kolstad said.

Some El Camino-size bells were made in 1963 by an individual, Justin Kramer, in Huntington Beach. Some are still around, painted a pale green.

Kolstad said he first noticed an El Camino bell when he was a child of 8 raised in Southern California, when in1959 he saw an old bell along Whittier Boulevard, a part of El Camino. It was surrounded by shiny new buildings and looked out of place, "but I liked the bell."

On a 4th grade tour of California missions he first saw an original mission bell, and he became even more interested in the history of the missions, and the bells.

In 2000 he decided he'd like to add a bell to his backyard of his home in Saratoga.

Kolstad contacted Rice at his home in La Canada, in Southern California, about buying a backyard bell.

"He said he wouldn't sell me one unless I took everything."

"I got all the old patterns and molds when I got the company," along with 7,000 or 8,000 small souvenir bells, which Rice had continued making until he shut the business down.

Kolstad said he got rid of the old inventory by making them prizes for donors to KPBS-TV and KCET-TV in Los Angeles. He was featured in a Huell Howser "California's Gold" television program. He recalled that during a break in the filming, Hauser said, "Tell me something that will get me excited about bells."

Kolstad said when he was searching for a backyard bell, he learned of the bell company.

"I heard a rumor that the owner of California Bell Company wanted to sell. He was 84."

Kolstad said after he purchased the firm that he told Rice he would run the business for "a couple of years." But Rice told him it would be a 20-year involvement.

"He was right. I'm halfway there," Kolstad said of his 10 years of bellmaking. "I got all the old patterns and molds when I got the company."

He said he also makes and sells backyard bells, with clappers -- unlike the El Camino bells. He charges $2,000 per bell, he said.

The tradition of the bells -- which never actually marked the route of the original Spanish El Camino Real -- dates to a concern in the 1890s in Los Angeles, when people became concerned about the El Camino route getting lost in new developments, as well as being concerned about the eroding missions. Some missions were literally washing away in the rains due to being made of adobe bricks.

In 1904 people formed the El Camino Real Association, and in 1906 the first El Camino Bell was installed, Kolstad said.

The state eventually purchased 500 bells and installed 450. But an inventory in 1955 showed that only 75 of those bells remained, he said.

I love the bells!

I live in Pacifica, but I've been working with John to accomplish the purchase and installation of this Camino Bell at El Palo Alto. He is a terrific man who's so enthusiastic about history - it's been a wonderful adventure to get this project done.

Beta Sigma Phi is proud to provide this lasting memento dedicated at such a beautiful, historic site.

We wish everyone great pleasure in viewing it there!

i have an old EL Camino Real bell made out of cement with curved pole looking for information if they were ever used as landmarks,I thought at the old pasadena bridge had a few marking the path of the missionaries

I wish I could add a School Community from the drop list. I´m from Chalmers University of Technology in Sweden. Wonderful YouTube clip! My favorite part of my favorite road. John, I really appreciate your mission, and I like your title, "Bellmaker".

When. I was a small child there were bells on curved poles up and down El C throughout Santa Clara County. I remember my dad explaining their significance.

Does anyone remember what happened to the original bells? it's a shame they were removed in the first place!

A Pragmatic Approach to A Trillion Trees
By Sherry Listgarten | 1 comment | 2,394 views

The University of California’s flexible policies during COVID-19
By John Raftrey and Lori McCormick | 6 comments | 1,899 views

Repairing a Disagreement with your Beloved & “Physical” vs. “Social” Distancing
By Chandrama Anderson | 0 comments | 1,255 views