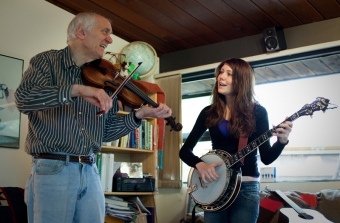 I have my ticket! These kids are awesome... I've been a huge fan of their entire family for years.

GO, Tuttles!.... Wish I could catch your show (playing Opening Night down the road from you with TheatreWorks....).... Keep us posted *

The Tuttle kids are the BEST.

The show sold out -- I think they had to turn away people at the door who showed up without advance tickets.

The show was fantastic! Enjoyed every minute of it. The music set my heart soaring. Gorgeous rendition of Annabelle by Gillian Welch that I liked even better than the original, which I love. The audience demanded two encores -- the family hadn't come prepared for a second encore and had to have a powwow to come up with something at the last minute. It was fabulous, too! I can't believe the voices coming out of Molly Tuttle and AJ Lee, at their ages, too.

This was the first Redwood Bluegrass Association show for me. They sell goodies to eat in the back that are way beyond the usual concert food. Yes, they had brownies, but next time, forget eating them, I want to buy that recipe! I'm not normally a fan of pie, but the pie had the most amazing pie crust -- the best I've ever eaten.

Jack Tuttle announced that February 20 concert at Lucie Stern (opening for Laurie Lewis), Molly will be debuting some original songwriting, but not strictly bluegrass. I'm really curious to see what she does.

Flying: How to lower your impact
By Sherry Listgarten | 10 comments | 2,179 views