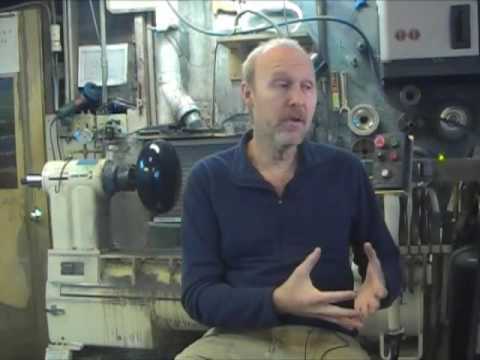 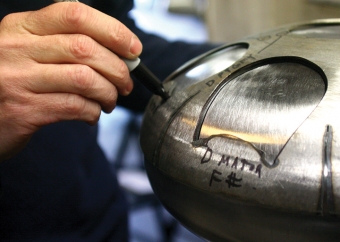 Steve "Spike" Finch draws outlines on a drum for areas he will cut out to play different notes. Photo by Veronica Weber/Palo Alto Online.

Steve "Spike" Finch of Menlo Park is busy when he can be making his Zen Tambour drums.

"I'm selling them as fast as I'm building them, but that's not that fast," he said on a recent afternoon in his kitchen. After displaying some of the techniques he uses to create a drum, he slid into the kitchen to take his pain medication.

Finch has osteoporosis and three fractured vertebrae. He had to leave his job as a heating, ventilation and air-conditioning technician in 2003 because of a fall in which he injured his back.

"Previous to my condition, I did a lot of physical activity. I did rock climbing; I had a physical job. For someone like me to sit around and watch TV all day, I'd go crazy," Finch said.

So he turned to art.

Finch builds drums out of propane tanks. He uses only the curved sections at the top and bottom to create his extra-terrestrial-looking drums. The notes hit like weighty rain drops, creating a constant rhythmic pattering. It sounds nothing like the harsh clang of an untouched propane tank.

Finch initially practiced stone turning, creating the types of stone vases his wife loved. Though much of his focus is now on his drums, stone turning, he said, "is my artistic venture by default."

"I made the transition (to drums) by accident. It was actually on Father's Day," he said. His wife broke a handle off of a pot while cooking, and she asked him to weld the pot back together.

"I ended up burning a big old hole in the thing and got really kind of upset about the whole thing. I started to throw it around the garage a little bit and said, 'Stupid pans.'"

Through frustration, he came up with an idea. He started to think about the interesting sounds the pan was making as it bounced off walls and work benches. He thought of Caribbean drums, and after research, came across Dennis Havlena, a Michigan musician who builds his own instruments.

"His concept was incredible, a drum from a propane tank. They just looked terrible. I put an artistic spin on it," Finch said. Finch shortened the drum, turning it into something that looks like a flying saucer. "This makes them more manageable. You can put them on your lap," he said.

He added a darkener, patina and a gloss, giving the drum the finish of a polished skipping-stone. At last year's Palo Alto Festival of the Arts, he debuted his new creation.

"It was absolutely an incredible experience: the physical quantity of people who just came to the booth and didn't even look at my stone turning. They were just stuck on these drums," Finch said.

Finch said that his drums attract a wider audience than his stone work. Generally, he said, older homeowners like his stone pieces as art to fill up their houses. The audience for the drums ranges from people who hang the drums on the wall to musicians who need them tuned to specific octaves.

Nick Toone from Worcestershire, England, said in an e-mail that he found out about the Zen Tambour from a steel-drum forum. Toone said he "was taken by the way they looked as well as the way they sounded."

"The guy obviously cares as much about the visual presentation as the audible end result. He's a true artist," Toone said.

Karen Aguila of San Jose recalled seeing the drum at the Palo Alto festival. She doesn't claim to have any musical talent, yet said she bought the instrument primarily for the relaxing sound. She displays her drum on her bedroom wall and is buying another for her living room.

A few fans have even uploaded YouTube videos of themselves playing the drums.

Finch starts with new propane tanks and cuts off the base and handle with a plasma saw. He then takes out the center cylinder and welds the two ends together. He uses a layout to mark where to cut out different-sized tongue-shaped areas to play various notes. The size of the "tongue" and the width of the cut determine the note each tongue will play when struck.

Finch uses a patina, stencils and a gloss finish for an aesthetic boost. Overall, the creation process takes about eight hours, but due to his back problems, Finch works on and off with the drums.

"It's kind of a magic scale," Finch said of the pentatonic scale. "You take any five notes and put those together, they all sound good together. ... I'm not sure of the music theory behind that. I just know it's an incredible sound."

He always had an interest in music, but never had any formal training. "I just loved the concept and I wanted to add my own artistic touch."

Despite his claims to the contrary, Finch clearly has a knack for playing the drums. He plays in the evening to relax and help him visualize his next project.

"Forget TV: I just play my drums," he said. "Whether it be actually building them or just thinking about the idea, it just occupies my mind. It takes me away from my back pain and lets me take up the day with other things."

Finch is already selling his drums widely on eBay, and plans to expand. "I'm still young at it, so I don't know where it's going to go. My goal is to keep them going if I can." n

Info: Zen Tambour drums cost $300. For more on Finch's artwork, go to his website, exoticvessels.com. His work is available at myworld.ebay.com/exoticvessels/.

These local restaurants are donating meals to Bay Area residents in need. Here's how to help.
By Elena Kadvany | 6 comments | 10,833 views

Coronavirus: Plan ahead now for a big outbreak
By Diana Diamond | 18 comments | 3,909 views

Will the Coronavirus Save Lives?
By Sherry Listgarten | 29 comments | 3,733 views