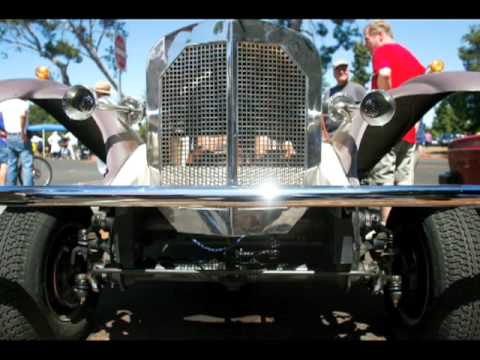 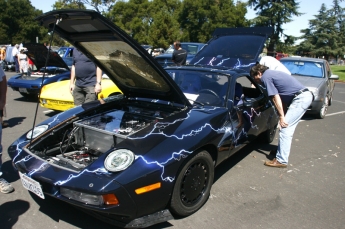 Attendees of the annual Electric Car Rally stop by to look at Jeff McCabe's converted 1984 Porsche 928, which runs on 750 batteries, on Aug. 29, 2009. Photo by Veronica Weber/Palo Alto Online.

A truly awesome job on this story. Kudos to the reporter for putting this together.

Maybe next year you can get a ride in the T-Zero, Tesla or an Aptera which should be there.

And there is an electric van called "The Moose"!

>> Agreed. This show has always impressed me with it's no BS honest
>> approach to the E-car. While the electric is not THE car of the
>> future, it is definitely A car of the future.

I think of these shows at the equivalent of the "Homebrew computer groups" back in the late 70s. Back before the time of PCs it was just a bunch of hobbyist making stuff from scratch. But among that group of people were some kids with the names "Wozniak, Jobs and Osborne" all of home founded companies that lead home computers we have today.


If you look at the designs of cars like the Tesla and Aptera today both of which get over 100 miles per change I do think that are sufficient as a "commute" car for an everyday consumer. What needs to have though is the price needs to drop by a factor of 3. Something that I think is possible about 10 years out (i.e. 2020).


Does anyone have a trailer mounted generator to hook up to an E car for extended touring? And what does AC do to mileage?

The T-Zero which was the yellow car and the proto-type for the Tesla cars today, had such a trailer.

See the wikipedia article. It has a picture on the bottom right.