VIDEO: Celebration of Athletes at the 2009 Summer National Senior Games 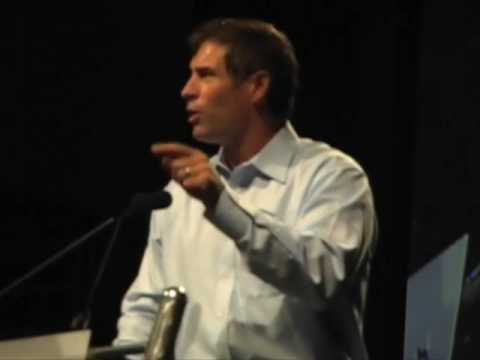 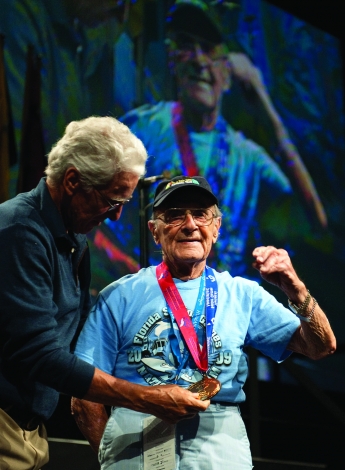 Roger Gentilhomme, a 100-year-old tennis player and bowler, is inducted into the Senior Games Hall of Fame at the Celebration of Athletes at Stanford University on Aug. 8, 2009. Photo by Patrick D. Mcdermott/Brooks Institute © 2009.

They came in cowboy hats, sequins and tie dye to cheer their states' representatives at the 2009 Summer National Senior Games.

Pairs of senior athletes paraded down the center aisle at Stanford University's Maples Pavilion Saturday evening under the colorful banners of their state flags.

The Celebration of Athletes took place one week into the two-week-long competition. The ceremony included a parade of flags, speeches by former Olympian Jennifer Azzi, former NFL quarterback Steve Young and others, the induction of two athletes into the Senior Games Hall of Fame, musical performances and the arrival of the solar-powered Senior Games torch.

One-hundred-year-old Roger Gentilhomme, the oldest Senior Games athlete, received a standing ovation for his years of championship tennis and bowling. He was later inducted into the National Senior Games Hall of Fame, with a medal presented by Olympic gold medalist Bruce Jenner.

Starship singer Mickey Thomas led the Oakland Interfaith Gospel Choir with an original song, "Long Live the Challenge," which was written for the games, as athletes and family members held their hands high and shouted "to raise the roof" in celebration of their accomplishments.

"Please let your light shine," said Azzi, a former Stanford University and WNBA basketball champion. "Thank you all. Age really is nothing but a number."

Young urged the crowd of athletes, "You should shake the hand of all the people who participate and thank them for the challenge to see how good you can be. That is the root of sportsmanship."

Click on the picture of Steve Young, at top left, to watch the video.

■ VIDEO: Up close and personal - Interviews with Senior Games athletes

Pam is on my volleyball team (the Arch Rivals) and is an amazing athlete as well as a terrific teammate. One of the things I love about competing at this level is the opportunity to meet and hang out with people like Pam and her husband, Rob.

Shout out to the Arch Rivals! Show me!!

Thank you for writing such a complimentary article about my friends, Anita Murchie and Sylvia Will, winning the gold yesterday in tennis doubles 70-74 age category. Of course I'm bias, having been a friend of Anita's for about 40 years. But I was so inspired by their
sportsmanship, their strong perseverance, and their humbleness. It's an honor to know those two champs, who are already looking forward to Houston. They are really special women and athletes.

These local restaurants are donating meals to Bay Area residents in need. Here's how to help.
By Elena Kadvany | 6 comments | 10,848 views

Coronavirus: Plan ahead now for a big outbreak
By Diana Diamond | 18 comments | 3,925 views