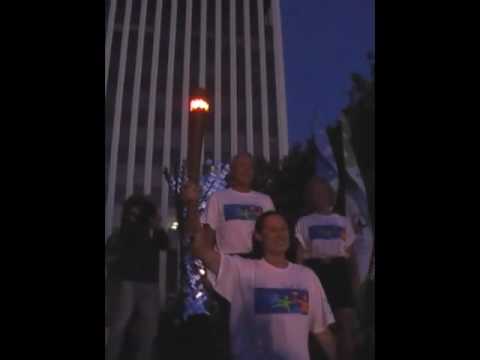 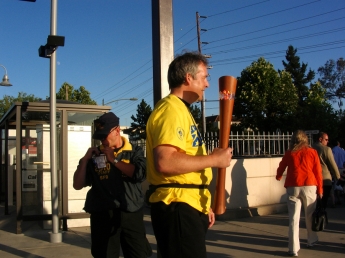 More than 40 runners brought the excitement of the Olympics to downtown Palo Alto Saturday evening, carrying the first solar-powered torch to King Plaza to inaugurate the 2009 Summer National Senior Games.

A crowd of several hundred people of all ages, from children to seniors, came out for the festivities, which included live music, activities for kids and fireworks.

Seniors and kids alike danced to the music of The Fabulous Hummerz amid the carnival atmosphere.

An original theme song, "Long Live the Challenge," was written and recorded by Starship singer Mickey Thomas and was played during the event. Thomas is known as the voice behind such hit songs as "Sara" and "Nothing's Gonna Stop Us Now."

But the star of the show was the solar-powered cauldron, a 12-foot-high shimmering tower of 800 mirrored tiles that twinkled as Palo Alto athletes Beth and John Guislin touched the tower with a solar-powered torch.

Fountains of fireworks exploded behind the stage where the cauldron was lit.

"When I was standing with my fellow Olympians and saw the flags and as I got a glimpse of the torch coming down the street, I got a big bubble in my throat and tears came to my eyes," said Anne Warner Cribbs, president of the Senior Games' local organizing committee and a producer of the two-week event.

"It lived up to my expectations and I would say probably went beyond," she said of the opening ceremony.

Earlier in the evening, Mayor Peter Drekmeier descended from Caltrain at the University Avenue station and was the first runner to carry the torch.

The relay made its way along El Camino Real and through the Stanford campus, then up University Avenue and to Hamilton Avenue with a police escort and three attendants on Segways.

Drekmeier welcomed the crowd at City Hall, speaking about how the torch, made of old-growth redwood, is as old as the time when the first torch was lit at the first games. He presented Cribbs with a proclamation from the city for her work on the Games.

The Games have opened at a time when the country is facing many challenges, said David Jones Jr., CEO of Humana, which is sponsoring the events. Obesity is one of the largest challenges the country faces, and the games offer an opportunity to encourage others to join in, he said.

"My hat is off to people in their 60s and 70s who are encouraging everyone to become athletes," he said.

■ Road closures during the Senior Games

OK, I was at the Senior Games 'Opening Ceremonies' with my wife and younger son. We read the promise of 'Fireworks' online, and decided to check it out. Our first sign this was a 'no-op' event was that we were able to park basically right next to City Hall. As we walked up to what appeared to be a pretty small crowd (mostly passers-by it seemed - no more than 100 people), we heard a few random pops and a few bright white lights that topped out at about 10 feet. That was the fireworks. An uninspiring speaker, and a torch that looked a little odd. The City made quite a big deal of this ceremony - lots of police and firefighters around, politicians galore, they closed down a stretch of Hamilton Avenue for several hours, and had electrical windsocks running full blast in a row down Hamilton in front of City Hall.

Don't get me wrong - I like the idea of the Senior Games. Perhaps it will inspire me to get back in shape. But the City spending $500K on this, and investing this much in a 'rinky-dink' opening ceremony is just a big boondoggle.

In this difficult budget year that the City is doing this is mind-boggling. Even my 14 year old son had some choice words to describe what a waste of money it was......

A great big thank you to the City of Palo Alto for having the good sense to sponsor such an inspiring event as the Senior Games. I am volunteering and working for the games each day of the 14 that they are here. I have met so many wonderful athletes and their families and friends who are thrilled with being in our beautiful city. I had dinner at The Fish Market on Sunday and sat next to a husband and wife (she is swimming in the games) from Atlanta, Ga. They were gushing about the games and the city. I can't count the number of people who have said thank you for volunteering. The business income will way outweigh the small monetary encouragement Palo Alto has offered in support not to mention the goodwill that is being spread daily. Lastly, Kudos to Anne Cribbs and her staff for a terrific event. Especially, the amount of effort going into making this an environmentally conscious Senior games.
To the "Observer" come out and volunteer or just watch, bring your son and whole family. Check out free bikes (at FreeWheeling) and ride around to the events. Then, write your experience from a broader perspective.

My issue is that I don't think Palo Alto's $500K sponsorship played any role in the decision to host it here (it is Stanford's facilities they want, not the City of Palo Alto's), and I think it had more to do with political relationships than it did with a solid and level headed business decision. When there is no money to fix sidewalks, but money to host an athletics tournament that would come here anyhow, I wonder about the business savvy of our Council in tough economic times.

I will absolutely come out and watch, and I'll be inspired to think about what sports I would compete in.

Anyone know how much busier Palo Alto hotels and restaurants are because of this event? I can see the city sponsoring this kind of event if they got the money back via hotel and restaurant sales taxes.

These local restaurants are donating meals to Bay Area residents in need. Here's how to help.
By Elena Kadvany | 6 comments | 10,849 views

Coronavirus: Plan ahead now for a big outbreak
By Diana Diamond | 18 comments | 3,926 views

Will the Coronavirus Save Lives?
By Sherry Listgarten | 29 comments | 3,743 views