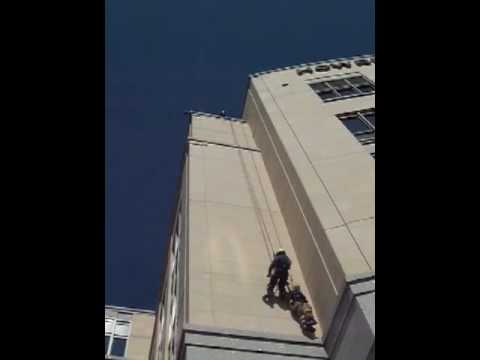 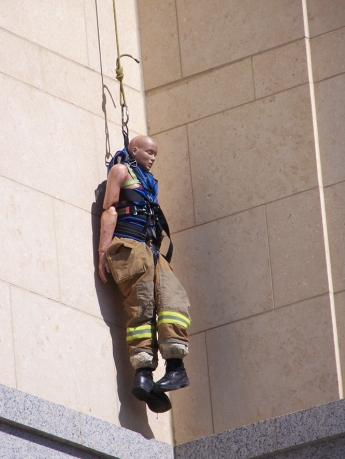 A man purported to be hanging by the neck from the Howrey law offices building in East Palo Alto Saturday turned out to be a dummy. Photo by Sue Dremann/Palo Alto Online.

A man purported to be hanging by the neck from the Howrey law offices next to the Four Seasons Hotel in East Palo Alto Saturday turned out to be a dummy.

Dozens of people telephoned 911 on Saturday morning to report the hanging man, according to Menlo Park Firefighter Neiley Hunt. But the "victim" turned out to be a fire department mannequin sporting a flame tattoo on its right arm.

The drill practiced rope rescuing -- lowering team members down the building's facade to save the mannequin -- which represented a window washer who had fallen from his scaffolding.

Among those participating in the drill was Angus, a border collie that was lowered down the rope with his handler, Peter Gross, a San Francisco firefighter. The dog-lowering exercise was to get Angus used to ropes in case of having to be lowered into a building with collapsed floors, to seek victims or bodies.

Firefighters from as far away as Santa Clara and San Francisco took part in the training exercise.

Singapore's oldest cafe was about to open in Palo Alto. Then, the coronavirus hit.
By Elena Kadvany | 2 comments | 4,950 views