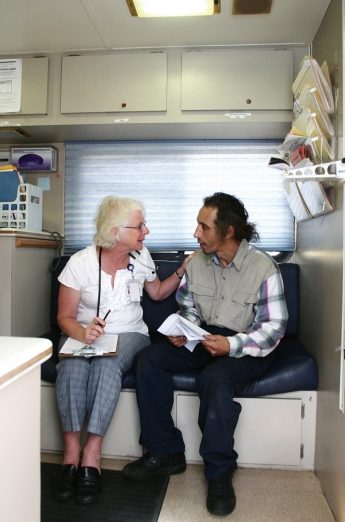 Margaret Allen advises Jesus Garcia last week to head to the emergency room due to a foot infection that has spread to his bloodstream. Photo by Veronica Weber/Palo Alto Online.

Curtis Lewis cautiously approached the Ravenswood Family Health Clinic's mobile unit on a recent Thursday. It was his first visit to the portable clinic, parked in front of a discount store on Bay Road in East Palo Alto.

Lewis was laid off from his longtime job at Sequoia Hospital a decade ago and recently lost his Kaiser health insurance. He suffers from high blood pressure and hadn't had medical care in several months. As he shyly stood waiting, head clinician Margaret Allen greeted him, asking, "You all right?"

Lewis hesitated. "I hope so."

With a grin, Allen motioned him over. "Well, we'll find out!"

Thanks to the outreach of Allen and her coworkers, people like Lewis are able to receive medical care regardless of their backgrounds or living situations.

Allen and her team head the Ravenswood Family Health Clinic's Health Care for the Homeless program, which uses a mobile clinic to care for homeless and low-income patients in the East Palo Alto area every Thursday afternoon. The program, which is free to patients, is part of the clinic's mission to provide primary medical care to all who seek it, regardless of insurance, immigration status or ability to pay.

Allen, a physician assistant, has more than 17 years' experience in treating the homeless and poverty stricken. Her warm, outgoing personality shines through her blue, no-nonsense scrubs and crisp British accent. She speaks to her patients as if they were old friends (as many have become), and she and her staff strive for a comfortable, welcoming atmosphere -- crucial for serving a population wary of trusting authority figures, she said.

Before getting started in the mobile clinic on a recent afternoon, Allen offered bottles of water and a bag of apples to those around her.

"An apple a day keeps the doctor away," she said. "They might even be organic."

A Palo Alto resident, Allen is also the lead clinician at Ravenswood's Belle Haven clinic. She was raised in Britain and worked with the needy in Chiapas, Mexico, and San Jose, Calif., before coming to Ravenswood. She's also worked as a lecturer at Stanford University (twice receiving a "teacher of the year" award) and was recently granted the national 2009 PA Service to the Underserved Award by the American Academy of Physician Assistants.

Many patients have come to depend on Allen and the clinic being available to them on a regular basis, even as their living situations remain shaky.

"It's so important that we be here every week," Allen said.

Patients come from East Palo Alto, Palo Alto, Menlo Park and beyond. For some, it is the only care they receive. Guillermina Andrade, a diabetes patient with a bad cold, walked all the way from Redwood City to see Allen. Andrade speaks only Spanish and is one of many non-English-speaking patients the clinic serves.

"Gracias, doctor," she repeated, as Allen took down her information.

"There are county units but never enough room," Allen said, referring to other clinics serving the ill.

In addition, her patients often feel uncomfortable and unwelcome in a traditional hospital setting.

"These people cannot sit in wards; other people stare at them," she said, adding that many have psychiatric problems that make it difficult for them to sit and wait. She estimated that 80 percent of her patients suffer from mental-health issues and/or drug addiction.

The biggest challenge of working with the homeless is simply keeping in touch with them. Due to patients' transient situations -- especially when police frequently evict the homeless from their encampments in the area -- maintaining relationships is critical.

"I have patients whose belongings are just bulldozed over. We're constantly trying to follow where the people are going," Allen said. "It's hard to get to the people who need us the most; people are afraid to come out."

Because of the inconsistencies in patient visits and outreach, Allen does not know how many people needing care are in the area but said she usually sees 10 to 12 patients in the few hours the mobile clinic is in operation each week.

The program is funded by a federal grant, with the hope that providing primary and preventive care will eliminate costlier emergency-room visits in the long run.

"The more we can do out on the streets the better, because it keeps them from the ER," Allen said.

The mobile clinic contains two exam rooms and a waiting area in which paperwork and preliminary exams can be undertaken. It is fully equipped for such routine tests as Pap smears, blood tests and urinalysis. Clinic staff can prescribe medicine or order referrals if necessary.

Allen's patients often suffer complications from "an unstable life and poor self-care," she said. The most common problems she sees in patients are high blood pressure, diabetes and, specific to the homeless community, health issues stemming from inadequate personal hygiene.

"The homeless have a big problem keeping themselves clean," she said, owing to their lack of access to clean bathrooms and supplies. The resulting problems can be embarrassing and painful. "It is a source of pain for them to be dirty; it's bad enough to be homeless," she said.

Sleeping outdoors leaves a person vulnerable to unusual problems, too, Allen said, recalling a man who came to her with a dead insect lodged in his ear. It took some time and careful tweezer work, she said, but "we spared him a trip to the ER."

Community health worker Tayischa Deldridge has worked with Allen for four years and the two have an easy rapport. Deldridge, a case worker in monkey-patterned scrubs, handles much of the team's outreach and also assists with patient paperwork and vital exams, such as checking blood pressure.

"HCH (Health Care for the Homeless) was meant for me. It's a calling," Delridge said.

"We are a team," she said of her relationship with Allen. "I get 'em and she sees 'em."

Delridge and driver Raymond Meachem travel with the van around East Palo Alto weekly, meeting potential patients and checking in on existing ones.

Delridge, Meachem and Allen comb parks, abandoned buildings, tent cities and street corners to get the word out about the clinic and to encourage patients to keep up their health regimes. This pro-active outreach is key, Meachem said, as patient visits tend to drop off if the van changes its schedule or location.

The clinic is necessary now more than ever, patient Jewell Walker said: "It's hard for everyone to make ends meet."

Walker, a robust man of 62 who is currently residing in Redwood City, said he exercises by playing basketball but suffers from gout, heart problems, chronic pain and mental illness, and requires numerous prescriptions.

A longtime patient, Elaine Williams, came to the clinic to refill her prescriptions and with a possibly broken knuckle, injured in a fist fight. Allen clucked and shook her head at Williams' sheepish explanation, then sent her off with a recommendation for an X-ray.

For Williams, like many of the clinic's patients, Allen and her team are invaluable.

"I love her. She takes care of me very well," Williams said.

Singapore's oldest cafe was about to open in Palo Alto. Then, the coronavirus hit.
By Elena Kadvany | 1 comment | 4,652 views

A Pragmatic Approach to A Trillion Trees
By Sherry Listgarten | 4 comments | 4,128 views

Repairing a Disagreement with your Beloved & “Physical” vs. “Social” Distancing
By Chandrama Anderson | 2 comments | 2,802 views

The University of California’s flexible policies during COVID-19
By John Raftrey and Lori McCormick | 6 comments | 2,704 views