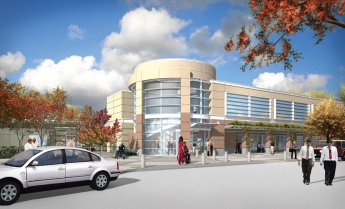 Designs for the mental health center emphasize creating a healing environment through use of natural lighting, landscaping and other "therapeutic" design elements. Rendering courtesy of The Design Partnership.

Anyone notice the lack of complaints about this hospital expansion vs. Stanford's? Granted, the expansion is not on the same scale. Also notice that the city did not try to squeeze anything from the VA to mitigate anything. And, finally notice how smoothly this process went from announcement to ground breaking (approx. one year since it appeared in the Weekly) with the city out of the process.

Can't compare the two. The VA is totally non-profit and serves an underserved population. Stanford psychiatry won't take outpatients on public assistance, has no policy for helping those with inability to pay, and is not easily accessible to those using public transportation. Stanford overwhelmingly serves a well-insured or wealthy population only.

Additionally, the VA building is not an expansion -- it is a consolidation of existing resources. Note that the building it is replacing will be torn down and the space used for parking.

Stanford wants Palo Alto to provide the housing for its increased workforce even though it has plenty of land to provide the low-income housing. It also puts a greater strain on traffic and city resources.

I think the city leaders knew they could not extort money from the US government for an expansion of the VA Hospital. Stanford, however, is a private institution, so the council's eyes lit up with dollar signs.
Of course, they could not get away with this from a private company--they would just say goodbye.

Report Objectionable Content
Email Town Square Moderator
1 person likes this
Posted by Sarah
a resident of South of Midtown
on Jul 18, 2009 at 12:25 am

Kristen Barta, are you saying that the locked psych wards at Menlo Park will be relocated to Palo Alto? I used to work at the Menlo Park site, which is where the most severe and dangerous patients reside.

If the relocation is true, and if Palo Altans understood how much violence and illegal drug activity takes place WITHIN the wards, on the grounds, and in the immediate area, they'd be up in arms.

Report Objectionable Content
Email Town Square Moderator
1 person likes this
Posted by To the one who falsely accused Stanford...
a resident of Meadow Park
on Jul 18, 2009 at 2:59 pm

uh..the post about Stanford, a non-profit hospital, not taking psychiatric outpatients on MediCaid or Medicare or SCHIP is completely false.

Not taking VETERANS that are covered by the VA is different, if that is what you are trying to say. That I would believe.

But, unless things have changed drastically since I worked there up to 3 years ago, Stanford took "public assistance" patients.

Uninsured for whatever reason is another story. But then again, the VA only takes Vets, so I am not sure what you are trying to get at..