Gunn graduates 452 seniors, Paly 421 in a day of graduation fervor throughout the region 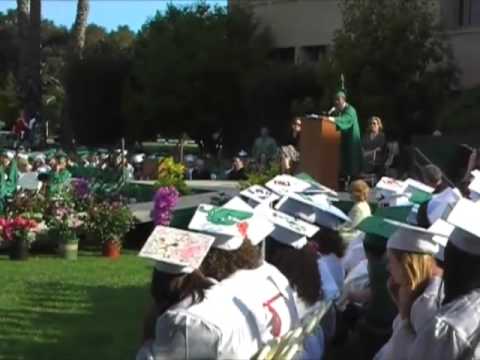 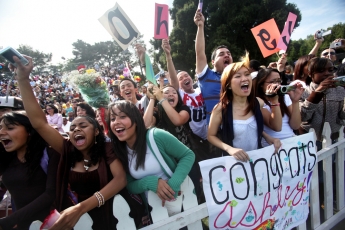 The entire Paly senior class spontaneously broke out singing, "Hey Now, You're A Rock Star," by Smash Mouth early in the ceremony.

"No matter what you do, please make sure you love it," Paly commencement speaker Christian Joshua Guerrero advised graduates.

"Make every single breath of yours count. You've got one life -- live it with a smile," he said.

Paly student speaker Jess Brooks said she will miss "our stressed-out, intellectual and thoroughly incredible student body." This past year "I realized how quietly amazing so many of my classmates are," Brooks said.

"As the children of the Baby Boom, the most prosperous generation in history, we've received many benefits, but also have seen the lesson that follows from unbridled growth and consumption," Paly student body President Erik Klingbeil told graduates and their families.

"We, the echo boomers, can learn from this legacy and now we have the chance to make changes for the benefit of others, and the responsibility to do so."

McEvoy said more than 90 percent of Paly's graduates will attend college this fall, "including many of the leading colleges and universities in the nation.

"Over the next four years, scholarships for the class of 2009 will total in the millions of dollars. We have students who have overcome extraordinary personal obstacles to be on stage today, and students who will be the first in their families to attend college.

"We celebrate their success. Today, we honor each and every student for their achievements over the last four years," McEvoy said.

At Gunn, three graduating seniors addressed their classmates in an outdoor ceremony. Meghna Dholakia, Justin Kahn and Tenny Zhang shared memories of Gunn, worries about what comes after graduation and plans for the future.

Dholakia encouraged her peers to take a chance and discover something new.

"The paths to success aren't as straight or as narrow as you might think," she said. "It doesn't matter where you end up, because in the end it is the journey that counts."

Kahn compared the support students offer one another to the support redwood tree roots provide in their grove.

"It takes an entire grove of redwoods for the trees to stand tall," Kahn said.

Growing tall has not been easy, but his peers have built a community that has made the experience a much easier and more enjoyable one, he said.

Zhang shared her fear of the future and the possibilities of failure.

"Despite the obstacles ahead, I do believe in our readiness," Zhang said. "Here, friends are like family and teachers are like friends." It is because of this closeness that Zhang believes she has been prepared for her future.

Guest speaker Julie Lythcott-Haims, dean of freshmen at Stanford University, introduced popular lingo into her speech, filling the amphitheatre with laughs from students and parents alike as she explained how "hoot" means "lame" to students, but parents define it as a funny happening.

Despite their etymological differences, this generation of students has a closer relationship with their parents than any other generation, she said. She encouraged students to maintain those relationships as they leave home on new adventures, and she advised parents to support their kids. If they have the courage to come to you and share their hopes and dreams, support them, Lythcott-Haims said.

At both ceremonies, references to the recent suicides of two Gunn students were brief and indirect.

Gunn student speaker Zhang mentioned "a brilliant costume designer and activist" as one of the many impressive people she had come to know in school.

"We've struggled with multiple tragedies both at Paly and at Gunn," Paly Principal McEvoy said.

"When all is said and done it's our strong sense of community and the relationships we have with one another that help us get through."

Congratulations to the "Nine-asty"!!! XD May you all go on to do (more) great things!

The memorial to the "missing girl" was very touching. But so very sad as well... she touched so many lives in such a good way, and her positive influence will live on in people's hearts.

I really enjoyed Palo Alto High's graduation ceremony. One of the highlights was the singing of The National Anthem by the Bennett twins.
To my niece Kimmi, and the whole graduation class..CONGRATULATIONS!!

These local restaurants are donating meals to Bay Area residents in need. Here's how to help.
By Elena Kadvany | 6 comments | 10,827 views

Coronavirus: Plan ahead now for a big outbreak
By Diana Diamond | 18 comments | 3,907 views

Will the Coronavirus Save Lives?
By Sherry Listgarten | 29 comments | 3,731 views