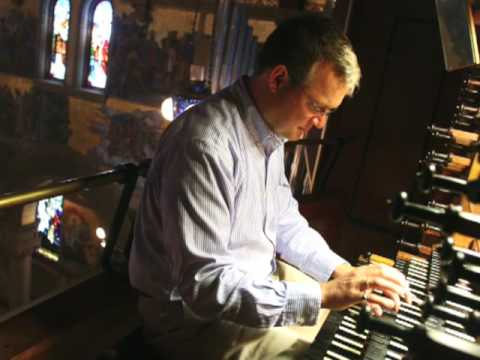 No, that's not quite it. In his words, he worships the Fisk-Nanney organ. All 4,422 pipes and every Baroque-sounding aspect of it.

"It's a desperately famous instrument," he says. "It's a fascinating machine. It's the most beautiful instrument I've ever played."

Oh, Morgan admits he sometimes strays. There were those concerts he played at Grace Cathedral in San Francisco, and there's that recital he has planned in Los Angeles next year. As Stanford University's resident organist, he also plays the three other organs at MemChu. They're not too shabby. He compares the Murray Harris instrument, one level below in the organ loft, to a Rolls-Royce.

But the Fisk-Nanney is a Maserati, and every day Morgan is high up by the stained-glass windows reveling in the organ's "fabulous, fabulous sound."

Nowadays, the Fisk-Nanney has its 25th birthday coming up. What do you get an instrument who has everything? You can use it to perform every piece J.S. Bach ever wrote for the pipe organ. That's what Morgan's planning, in a series of 14 recitals starting June 12 and running through the 2009-10 season.

The timing is doubly good, as this is also Morgan's 10th anniversary at Stanford. A native of Wales, he has a master's degree from the University of Cambridge and two doctorates in music from the University of Washington. He has performed widely and is also a conductor, Stanford lecturer in organ and choral studies, and director of the Stanford University Singers (and the Memorial Church Choir, starting this fall).

Yet even someone as schooled as Morgan isn't sure how many pieces Bach wrote for the pipe organ. There are always new ones being discovered. In 1985, for instance, a Harvard University professor turned up 33 more Bach preludes at a Yale library. Sometimes research goes the other way, and works are no longer attributed to Mr. Johann Sebastian.

"It's very fluid," Morgan says. "You have to keep an eye on the journals and see what's happening."

It's safe to say that the Bach recital series is rather a large project: about 18 hours of music. Morgan has traded up from his 20th-birthday present to the Fisk-Nanney, which was to perform the complete organ works of Dieterich Buxtehude. That recital series was only eight hours.

Two of the Bach recitals will be free: the performance next week and the holiday-time recital in December. Programs will be a mix of styles and genres. The June 12 recital will include well-known compositions such as the Toccata, Adagio & Fugue in C and the Passacaglia in C Minor, as well as smaller choral-based works.

Unsurprisingly, Morgan has been playing many of these pieces for a long time. Some he's had to learn in preparation for the recitals, so he's on a trip of discovery as well.

All the recitals will be played on the Fisk-Nanney, of course. The organ was built especially to reproduce the Baroque sound in music from the 16th through the 18th centuries; it rings with "incredible clarity" and "dark color," Morgan says.

The organ also has remarkable complexity, he says, including French and German reeds and choruses, and a lever that can switch between mean-tone and well-tempered tuning. (An organist can adjust the tuning from piece to piece, depending on the time period of the music he or she is playing.)

On a recent afternoon, Morgan directs visitors upstairs for a tour of the organ, climbing up the stone steps and into the loft. He's done this many times, but his smile is still wide with enthusiasm.

Light filters in from the church's stained-glass windows, which are suddenly quite close. Pages of music are piled in corners, and a plaque commemorates organ builder Charles Fisk, who died in 1983, while this instrument was being created. (The organ is also named after Stanford organist emeritus Herbert Nanney.)

A huge blower fan far below supplies air to both of the big organs, with air ducts running through the loft. Morgan points out a joint in one duct where the air pushes a piece of fabric out like a balloon. He reaches up and touches it, almost reverently. "It's a living thing."

At the Fisk-Nanney's console -- which Morgan calls the "flight deck" -- the keyboards are white on black instead of black on white, in the old manner. An organist has a huge array of sounds at his disposal through the stops; he can pull one out to make his keyboard playing sound like a French trumpet, or a chorus, or a Principalschwiegel. Morgan cheerfully admits to not knowing the exact translation of "Principalschwiegel," but he loves the gentle tone the stop creates.

Much of the time, the music doesn't indicate which stops to use. The organist chooses how to mix together the colors. When Morgan works with a new pipe organ, one of the first things he does is hold down one chord, and then pull out every stop, one after another, to hear all the possibilities.

At the Fisk-Nanney, he pulls out a stop marked "Holzoctava" and plays a few notes with a light, lovely softness. Then he adds some vibrato with the "Tremulant" stop. He turns around and beams. "Isn't that just a delicious, delicious sound?"

For the full effect, Morgan plays the Prelude in C. Cameras click from down below as delighted tourists visiting the church find themselves in the middle of an impromptu concert.

You'd think being blasted with Bach would be deafening from inside the organ loft, especially when you're wandering in between rows of pipes. But the sound actually rushes out and past you; the best place to listen is down in the church, about halfway down the nave, Morgan says. Occasionally a visiting musician or a grad student plays, and he gets to sit downstairs and have the full effect.

At a visitor's request, Morgan heads down to the loft's lower level to play the Murray Harris. The Romantic organ produces music that's bright and majestic, but it doesn't have the Baroque darkness of the Fisk-Nanney. Is it a younger sound? More innocent, somehow?

For someone so gregarious, Morgan finds it hard to describe at length the contrast between the sounds of the two organs. He opens his mouth, then closes it. He raises his hands high like parentheses, then shakes them dramatically, but can't put the feeling into words.

Finally he just laughs, then casts an admiring look up at the Fisk-Nanney. "It's the excitement. It's very visceral. It grabs you."

What: Stanford University organist Robert Huw Morgan plays all of Bach's pipe-organ music in a series of 14 recitals.

Cost: The June 12 recital is free.

Info: Details on upcoming recitals, including ticket prices, will be online at museum.stanford.edu. For more about Morgan, go to www.roberthuwmorgan.com.

We attended Robert Morgan's Bach recital last night along with a full house at MemChu. A great and varied presentation starting with an evenly paced Toccata in C, ending with the a more expressive Passacaglia in C minor....ten pieces total. LOVED it, particularly the low heavy pedal tones!

Only problem, I can't find the schedule for the remaining 13 recitals. Anyone have that?

Is the church with the beautiful church stained glass windows (Web Link)? I love it there. So beautiful!

A Pragmatic Approach to A Trillion Trees
By Sherry Listgarten | 4 comments | 3,964 views

Singapore's oldest cafe was about to open in Palo Alto. Then, the coronavirus hit.
By Elena Kadvany | 1 comment | 2,826 views

Repairing a Disagreement with your Beloved & “Physical” vs. “Social” Distancing
By Chandrama Anderson | 2 comments | 2,658 views

The University of California’s flexible policies during COVID-19
By John Raftrey and Lori McCormick | 6 comments | 2,614 views