Junior sprinter clocks the No. 2 qualifying times in both the girls' 100 and 200 at CIF State Meet 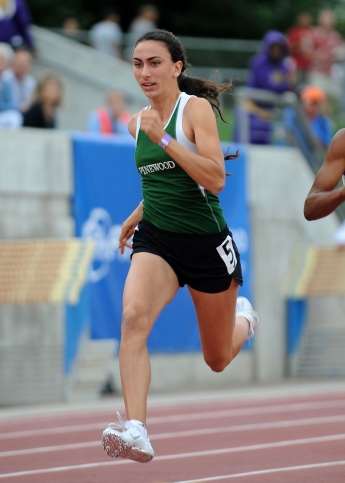 Pinewood junior Angela Gradiska won both her heats of the 100 and 200 and was the No. 2 qualifier for the finals in both races at Friday's CIF State Track and Field Championships in Clovis. Photo by Margaret Gallagher.

Robinson's performance was a second off her PR of 5:02, and was 21st in the state of California for the 1600. Cooper was 13th in the state with a time .48 seconds off the last qualifier, in her first season competing in the 300 hurdles. I would hardly call either of those performances a nightmare.
Amazing job by Gradiska, though. Second in the state!

Describing the efforts of a high school athlete in the state meet "dismal" is hardly appropriate. Did you stop to consider that most area athletes don't even earn the chance to compete in the meet?

Flying: How much is enough? It's personal.
By Sherry Listgarten | 7 comments | 1,765 views