But renovations of the 10,000-square-foot space above the current department may cost more than a new building, staff says 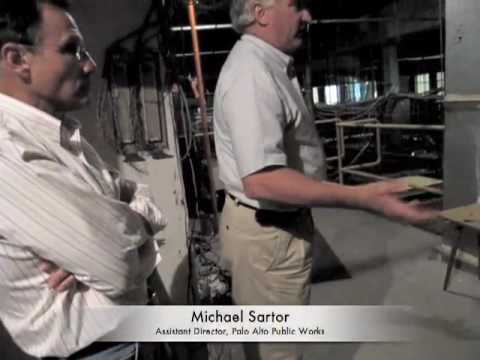 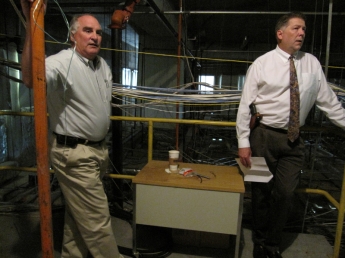 The cavernous stretch in the Civic Center has no floor. It resembles a giant boiler room without a boiler or the ideal setting for the final shoot-out in a James Bond movie. To enter it, there are no stairs or elevators, only a pull-down ladder from the ceiling of the department's makeshift records section -- a.k.a., three rows of filing boxes stacked against a hallway wall.

The 10,000-square-foot mezzanine has been used primarily for utility space since the Civic Center's construction in 1967, but Palo Alto officials are now revisiting it as a possible option for expanding and upgrading the city's underwhelming police facility.

With the local economy tanking and the Palo Alto City Council's decision Monday night to put a construction of a $68 million public-safety building on Park Boulevard on hold, the City Council and City Manager James Keene are considering new and cheaper ways to make the needed upgrades.

A new staff report singles out the police-wing mezzanine as one such alternative -- an idea that the city explored and council briefly endorsed in 2002. Councilman Pat Burt, who is among the staunchest proponents for a new public-safety building, said he wouldn't be comfortable entering into another land lease unless staff performs a "truly substantive analysis" of alternative plans involving the mezzanine.

Given the dismal economic conditions, a new building is by no means a given, he said.

"We have a hole that we'll have a hard time digging out of, and yet we have some overdue needs to meet for our emergency-operations and police-department functions," Burt said Monday. "Unfortunately, we're in an era for the foreseeable future where we're not going to be able to pursue what's desirable.

"If we work real hard we may be able to do what's necessary."

But, as just about everyone acknowledges, expanding the police department's current facility won't be easy or cheap either. In 2006, a blue-ribbon task force studied the city's options for a new public-safety building. After six months of deliberation, the group estimated that making the needed renovations to the building would cost the city about $70 million after financing costs are added, or about $13 million more than building a new public safety building at the group's ideal site, a vacant property on Park Boulevard.

Dan Dykwel, who served on the task force, said the Civic Center upgrades would have to include much more than simply fixing up the mezzanine. The public-safety building is considered an "essential services" building (a category that also includes hospitals, fire departments and emergency operation centers). As such, they are required by state building codes to not only be sturdy enough to withstand a major earthquake, but to remain operational during one.

As the report makes clear, the existing police building is "deficient in key respects." It pegged the cost of making the needed seismic improvements alone at $9 million to $9.5 million. Then there are the costs of installing elevators and support beams for foundation -- beams that would have to extend down through the building's three underground floors.

"You don't just renovate the mezzanine; you have to make sure all aspects of the building are brought back up to code," Dykwel said. "You're talking about foundation work and fixing up all the things people can't see.

"It seemed very impractical to spend that kind of money to fix the mezzanine when you would still have some of the same essential problems."

Ray Bacchetti, a member of the Human Relations Commission who also served on the blue ribbon task force committee, said the 10,000-square-foot mezzanine might not be big enough to bring the cramped police facility up to par.

The current facility, he said, is so cramped that officers occasionally have to hang paper over private information written chalkboards because there's no way to close off the room. The building doesn't have a sally port -- a secured entryway for prisoners -- and juvenile suspects currently have to be kept in close proximity to adult suspects, another compliance violation. The inadequate evidence storage area and the open garage are also substandard in many ways, he said.

"It's cut up like a rabbit warren," Bacchetti said. "It's half the size it ought to be, and it's extremely inefficient to operate."

Given these limitations, a new police building still seems like the most sensible solution, even if it means waiting a year or two to see if the economy rebounds, Bacchetti said.

"We should wait until the economy improves and make every effort to make the public-safety building such a high priority that when the city is making other budget decisions, these decisions should always be made with having a new building in mind," he said.

Public Works Assistant Director Michael Sartor said staff is currently working with consultants on reassessing the mezzanine option, a well as other potential alternatives such as splitting off the police department from the Emergency Operations Center.

Sartor, who led reporters on a tour of the mezzanine Wednesday, stressed that the heavily wired area is currently not occupiable. For one thing, it's missing a floor. In its place is a grid of orange beams.

"Everything here would have to be torn out," he said.

He also pointed out that the mezzanine option would require the city to find new space for the Civic Center cables and a temporary facility for the police department while the facility is being renovated. There is also the matter of cost. While construction costs for new facilities have dropped by about 30 percent in the last few months, renovating costs haven't dropped as precipitously, Sartor said.

Staff is currently working with its design consultants to reassess all the costs and evaluate other options for an expanded police building. Sartor said he expects the report to be completed by late summer.

Keene, who toured the mezzanine, acknowledged that the space, with its height limitations and structural deficiencies, leaves much to be desired. But he said staff is exploring all alternatives, even those that would entail a smaller project than the city originally intended.

"My own instinct is that there probably is no alternative, other than building a new building on a new site, that isn't a significantly scaled back option," Keene said. "I'm trying to make sure we're prepared to make recommendation and answer questions.

These local restaurants are donating meals to Bay Area residents in need. Here's how to help.
By Elena Kadvany | 6 comments | 10,811 views

Coronavirus: Plan ahead now for a big outbreak
By Diana Diamond | 18 comments | 3,889 views

Will the Coronavirus Save Lives?
By Sherry Listgarten | 29 comments | 3,724 views