Titans advanced nine athletes in 12 events for the section finals 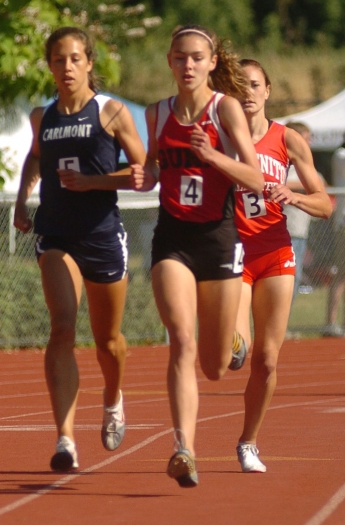 Gunn freshman Kieran Gallagher (4) led Stanford-bound Justine Fedronic (left) into the final lap of the girls' 800 at the CCS track and field semifinals on Saturday in Gilroy. Fedronic won the heat with Gallagher taking second with a school record. Photo by Keith Peters/Palo Alto Online.

Practice just got a lot less hectic for local track and field coaches following Saturday's Central Coast Section semifinals at Gilroy High. For the most part, everyone is done -- with just a few exceptions.

Palo Alto still has two competitors while Pinewood, Castilleja and Menlo-Atherton all have one. At Gunn, however, it's almost business as usual after nine athletes qualified in 12 events for the CCS championships this coming Friday at Gilroy High.

"We qualified everyone we expected to qualify," said Gunn coach Ernie Lee, "and many of the kids had tremendous races. Happy for sure, but actually more relieved, since we were expecting a lof of kids to qualify."

As for the non-Gunn individuals who qualified for the CCS finals:

Pinewood junior Angela Gradiska won her heats of the girls' 100 meters (12.06) and 200 (24.47) while posting the fastest overall times. She is the odds-on-favorite now in both events. The top three in the section finals will advance to the CIF State Meet the following weekend at Buchanan High in Clovis.

Menlo-Atherton senior Dominique Greene will be in the same races as Gradiska after running solid qualifying times of 12.75 and 26.05, the latter of which was wind-aided. She'll go into the finals seeded No. 5 in the 100 and No. 7 in the 200.

Castilleja senior Libby Cooper ran a personal best of 44.76 as the second-fastest qualifier in the girls' 300 hurdles. Her time ranks her among the CCS leaders while stamping her among the favorite to advance to the state meet.

The final local qualifier was quite an eye-opener. Palo Alto junior Philip MacQuitty ran the race of his life while posting the fastest qualifying time in the 3,200. MacQuitty's 9:11.52 surpassed the 9:11.99 he ran his freshman year while winning the CCS title. It also was the fastest time Saturday by nearly four seconds, with Mountain View junior and fellow rival Garrett Rowe clocked 9:15.13.

The race saw four runners under 9:17 in what had to be one of the faster semifinal races in years. Among that group was Gunn junior Paul Summers, who ran a personal best of 9:16.23 to join MacQuitty and Cummins in the field for the CCS finals.

Summers was among Gunn's solid contingent of qualifiers for the section finals.

Fellow junior Sunny Margerum led the way by qualifying in the same three individual events she did last season.

Gunn freshman Kieran Gallagher was the only first-year runner to qualify for the CCS finals. It took a school record of 2:14.49, the second-fastest time, to get her in. That broke the previous school mark of 2:14.79 by Tonya Bynoe at the 1984 CCS finals.

The only 800 time faster than Gallagher's was a 2:12.39 by Stanford-bound Justine Fedronic of Carlmont.

Gunn sophomore Erin Robinson also ran a solid race, clocking 5:09.35 to make the finals of the girls' 1,600. She had the sixth-fastest time out of the 12 who advanced.

Senior Allega Mayer and junior Lisa Fawcett both advanced in the 3,200. Mayer ran a personal best of 10:57.62 as the No. 5 qualifier while Fawcett just squeaked in at No. 12 with a personal best of 11:26.14. Fawcett outkicked a Saratoga runner for the final spot by less than a second.

Gunn sophomore Alison Ang, in only her first year of competing in the pole vault, made her first CCS finals by clearing 10 feet. She was one of only four to do so. The other who advanced had to clear 9-6.

In the boys' high jump, Gunn senior Marcus Anderson continued his consistent season by matching his personal best with a 6-4 clearance. Only four cleared that height, putting Anderson in position to gain one of the three berths for the state meet.

These local restaurants are donating meals to Bay Area residents in need. Here's how to help.
By Elena Kadvany | 6 comments | 11,499 views

Coronavirus: Plan ahead now for a big outbreak
By Diana Diamond | 20 comments | 4,386 views

Will the Coronavirus Save Lives?
By Sherry Listgarten | 29 comments | 4,052 views

The first few seconds after awakening; before I remember the virus
By Chandrama Anderson | 0 comments | 1,236 views