Goats for the greater good 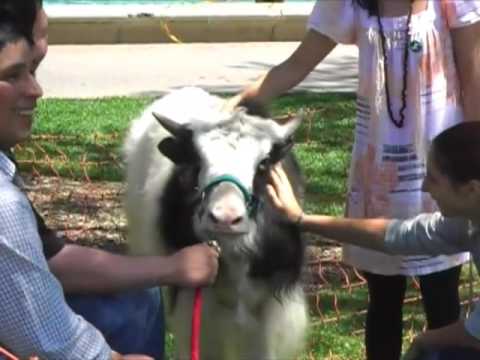 Pet a goat, change a life? Stanford students, faculty and staff did just that Thursday, as the Stanford Goat Project (sponsored by the Stanford InterVarsity Graduate Christian Fellowship) brought four goats (and one baby yak) to campus as a fundraiser for World Vision, a relief agency that donates dairy goats to impoverished areas.

The live animals were brought in to attract attention as well as help participants make the connection between the fundraising and the end result.

"We wanted to engage the campus with the issue of hunger and poverty," event organizer Nate Chambers said. "Goats as gifts are tangible, when giving money can be so abstract," he said.

For $5, participants could enter the animal pen and pet the likes of Darcy the black-and-white goat or Yakoo the 10-month-old yak. For $10, they could pose with the animals for a photo.

Each $75 raised buys one goat for a person or family in need, along with training on caring for the goat, Chambers said.

Some school departments collected funds to sponsor goats as a group, such as the Physics department, which raised enough for three.

The Goat Project has so far raised enough for more than 50 goats, according to Chambers. The group hopes the event will become an annual tradition.

The live animals were lent to the event by East Bay-based Goats R Us, which raises goats to work as eco-friendly landscape managers. And the pet yak?

Karla Kane is a registered user.


Update: Final tally is 84 goats, with more information and photos of the event online [Web Link].

The first few seconds after awakening; before I remember the virus
By Chandrama Anderson | 0 comments | 2,691 views

Can you stay healthy without making more trash?
By Sherry Listgarten | 2 comments | 1,962 views

Think about helping others in our coronavirus-affected area
By Diana Diamond | 4 comments | 1,872 views