VIDEO: And the walls come tumbling down... 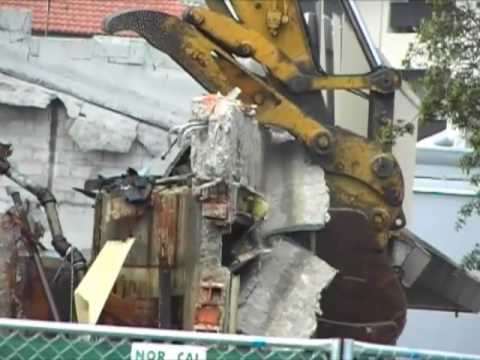 The long-abandoned California Craft and Floral building on Alma Street, near Forest Avenue, is abandoned no longer. This week, a major portion of the dilapidated building at 657 Alma St., was reduced to rubble by a construction crew from Redwood City-based W. F. Butler Construction, Inc.

The company is demolishing the gray structure to make way for a new, two-story office building, which would house about 10 offices, according to Michael V. Butner, the company's superintendent.

Butner said his company would build the foundation for the new office building, including bathrooms, a lobby and an elevator, while the actual offices would be constructed later. The project is expected to take about 10 months to complete.

The new building will also come with a new address: 101 Forest Ave.

So ... what changed that caused this eyesore to finally come down?

I remember shopping there in the mid-80's and then it closed before the big quake in '89. 20 years is a long time to rebuild. Who owns it?

Nice job on the video Tyler.

I ran by that place last night, after it was knocked down. The smell of rat excrement was overpowering. There must have been legions of rats living in there. Whoever owned it didn't care much about it.

I was told by the construction superintendent that the building is owned by Steven Dwyer.

Wonder if the city will make them build housing for any of THOSE workers. Or is that only Stanford?

Singapore's oldest cafe was about to open in Palo Alto. Then, the coronavirus hit.
By Elena Kadvany | 2 comments | 4,859 views

A Pragmatic Approach to A Trillion Trees
By Sherry Listgarten | 4 comments | 4,138 views

Repairing a Disagreement with your Beloved & “Physical” vs. “Social” Distancing
By Chandrama Anderson | 2 comments | 2,818 views

The University of California’s flexible policies during COVID-19
By John Raftrey and Lori McCormick | 6 comments | 2,712 views